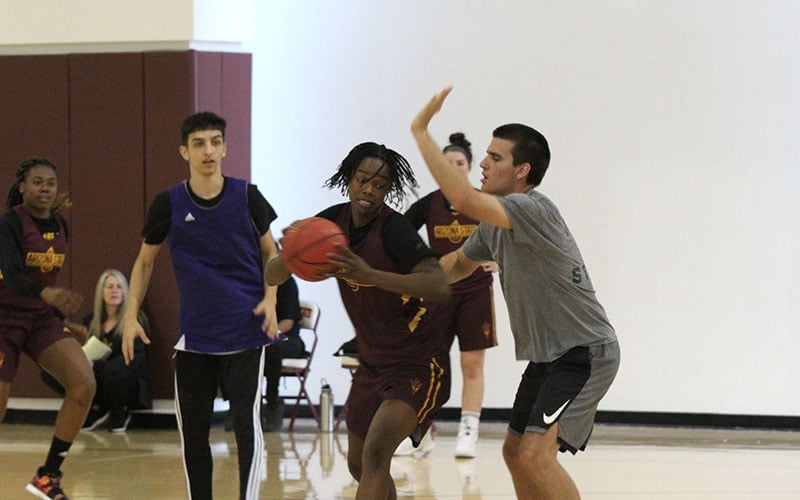 Charnea Johnson-Chapman persevered through a rough childhood to start for the Arizona State women’s basketball team and earn a college degree. (Photo by Sam Ficarro/Cronkite News)

She moved around often as her mother relocated to find work and she never spent more than a year at any school until high school.

It was an experience that shaped the ASU senior. Now, with her college career complete – the center helped lead the women’s basketball team to the Sweet 16 – her goals have shifted: She wants to give back and help open group homes.

“Growing up and living around, you see a lot of things,” she said. “And one consistent thing that was in all the towns I lived in were kids who came to school and couldn’t afford lunch, or they come to school and they would be wearing the same clothes that they did (the day) before.”

Her decision comes at a time when group home are under particular scrutiny. The Family First Prevention Services Act, approved by Congress in February 2018, prioritizes keeping families together with various counseling and treatment options, and puts limits on placing children in settings such as group homes.

Although her situation was different, she, too, found herself having to adjust. Her mom, Tammy Johnson, didn’t graduate from high school, but after getting a GED diploma, she did the best she could to take care of her five kids.

“She never went to college, so her profession was mostly like braiding hair,” Johnson-Chapman said. “So that’s how she would make money. That’s not really stable because you don’t get hair every day, and she’s not licensed. So she can’t work in a shop. … It’s just basically her going to other people’s houses or people coming to her house.”

Johnson-Chapman said her mother would also take cleaning and homecare jobs and the family had to accommodate her moves.

“She has to go wherever she can find clients,” she said, 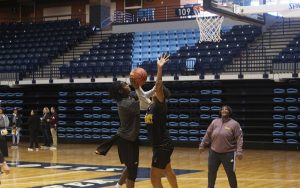 Ranked in the top 20 at her position in high school by ESPN.com, Johnson-Chapman earned first-team All-CIF honors as a senior. (Photo by Sam Ficarro/Cronkite News)

During her time at Canyon Springs High School, Johnson-Champman moved in with an assistant coach and an aunt to provide some stability to her life.

It was a tough adjustment, balancing basketball and academics, and left her feeling as if she was behind the rest of the team.

“We’ve always been told to do good in school and that was just kind of like, really bad and really hard to focus,” Johnson-Chapman said. “In the summer, I didn’t really work with the basketball team for the first month, and then I had to start working out with them. So I felt a little late and behind everybody else, so that was kind of dampening.”

Arizona State women’s basketball coach Charli Turner Thorne, who is a friend of Canyon Springs coach Gail Hale, was at the school to scout Hale’s guards when Johnson-Chapman caught her eye. 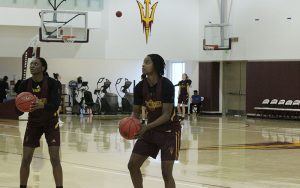 “I wasn’t sure if she would get there because she kind of came to the game late and wasn’t super skilled, just big feet and kind of gawky as a kid,” Turner Thorne said. “By the time she was a junior, I saw Nea (Johnson-Chapman) get a steal, do a Euro step in transition and lay it up, and I was like, ‘That kid could be really, really good.’ ”

That’s when Turner Thorne began recruiting her and both agreed she would be a great fit with the Sun Devils.

However, life on the ASU campus and joining Turner Thorne’s program were challenging.

Johnson-Chapman struggled her freshman year balancing academics with the rigorous schedule that comes with being a student-athlete.

Turner Thorne said Johnson-Chapman was on the verge of quitting.

“She really didn’t have anything else, giving up her scholarship and just going home and working a minimum wage job or something,” Turner Thorne said. “It was hard. This is hard work, and you tell others to step away, step back.”

Turner Thorne said a meeting with Johnson-Chapman allowed for a moment of reflection to put things in perspective.

“The conditioning and everything for a 6-3 kid is hard for her,” Turner Thorne said. “We just kind of made a pact. ‘Hey, we’ll figure it out. But we need you, and you need us.’ She agreed and the rest is history.”

Because of all the moves and living with different family members and coaches, Turner Thorne believes that she became a consistent parental voice for Johnson-Chapman.

After averaging less than seven minutes a game her first two seasons, Johnson-Chapman took over as the team’s starting center and flourished, helping ASU reach the Sweet 16 for the first time since 2015.

Hale is proud of Johnson-Chapman for what she’s achieved on and off the court, where she has twice earned Pac-12 All-Academic honorable mention honors. Hale said one would never know by Johnson-Chapman’s demeanor all that she has been through.

“She’s just happy every day,” Hale said. “I think, seeing her achieve what she’s achieved, Charli (Turner Thorne) was such a big part of that, supporting her. Seeing Nea Nea (Johnson-Chapman) go from not too much playing time, to a little bit more, and then starting her last two years – basically succeeding at the Division I level at a great school – it was a blessing for us to see that, and it’s definitely been a joy for all of us.”

Johnson-Chapman’s journey is the embodiment of a student-athlete success story as she persevered through numerous obstacles, waited her turn and emerged as a productive starter.

She is set to graduate in May with a degree in family and human development.

“She is like the epitome of what this experience is all about,” Turner Thorne said. “You get here, you pay your dues, learn from the top players ahead of you and then you step in and it’s time for you to shine. That’s hard sometimes. It’s hard to work that hard and not sometimes get the benefit of playing, so I just really appreciate Nea (Johnson-Chapman).”

After so many people paved a path for Johnson-Chapman, she felt a strong desire to give back.

She had a friend who stayed in a group home, and she believes the people running the home were in it for the wrong reasons.

“In group homes, they don’t get treated (well) in any kind of way because people are there for the money and not really to help the kids,” Johnson-Chapman said. “I just kind of took what I went through, of having to move around and not really having a straight head for something I clearly wanted until high school. And I just thought about the fact that if I open group homes, I can create stability in a kid’s life, and they can probably do more than what I did.” 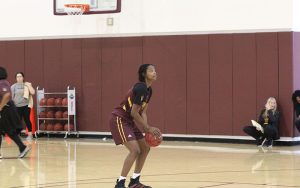 Johnson-Chapman said she wants to help people who come from poor homes or those who have had to move around a lot so that they can go to college, get a degree and do something with their lives, too.

She hopes to work with group homes that have the right priorities, providing stability in the lives of kids who don’t have it.

“I just kind of liked how they were just helping the kids,” Johnson-Chapman said. “It’s not too many kids to the people there, so you can really get a one-on-one interaction with them.”

“She’s somebody that didn’t grow up with a lot, came from a challenging background,” Turner Thorne said. “And I think, what I’ve seen over my years, people picking professions, they tend to pick things they can relate to, a passion. And her passion is helping people.

“If people didn’t help her, she could be on the street right now. But she had family members, and her high school coach really stepped up and helped take care of her, feed her and have her live with her. I think that experience with Nea has really just compelled her to be like, ‘OK, now I’m going to do that for other people.'”

It’s been a long journey for Johnson-Chapman, from a challenging childhood to nearly quitting Arizona State to now earning a degree.

“I don’t like to think about the beginning of my life just because it was so hard,” she said. “But I kind of have to just remember why I’m doing what I do.”

“It was a rough journey, but it also shaped me to be a better person. I’m still growing as a person. I still make mistakes, but I know I want to help people so they can have a better life.”