PHOENIX – Arizona lawmakers looked at the same 448-page Mueller report Thursday and saw two different things, with two very different reactions depending on which side of the aisle they are on.

If there was one common thread, it was that nobody’s mind appeared to be changed by the report.

The state’s Republicans saw a report that largely exonerated President Donald Trump of charges that his campaign colluded with the Russian government to gain advantage in the 2016 election, and of charges that the president tried to obstruct the subsequent investigation by Special Counsel Robert Mueller.

They said it’s time to move on.

Democrats saw a document that they thought was heavily redacted by the Justice Department and spun by Attorney General William Barr to put the best face for the White House on the report, which they said should just be the starting point for “a thorough, bipartisan review” of the matter.

“Barr’s partisan interpretation of the Mueller report is not the report itself,” Rep. Ruben Gallego said in a tweet Thursday. “We need to read the full report and Mueller should testify before Congress.” 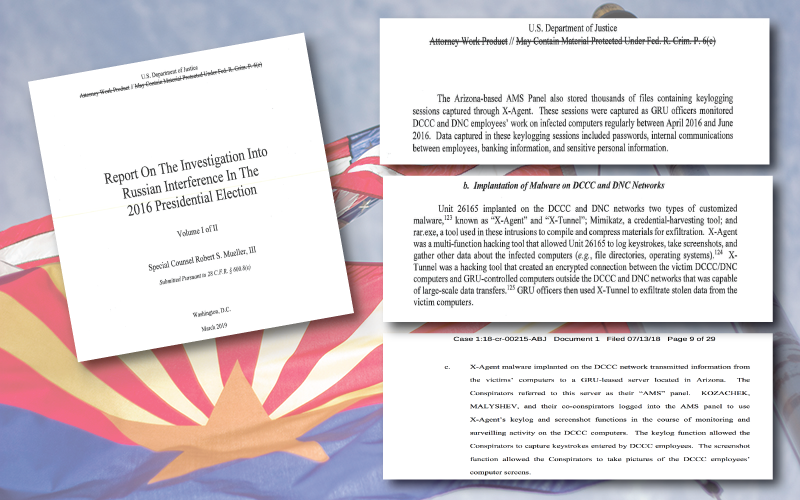 Gallego included a letter from the chairman of the House Intelligence Committee, Rep. Adam Schiff, D-California, to Barr and Deputy Attorney General Rod Rosenstein, asking them to appear before the committee “at the earliest opportunity” to testify on “the investigation’s full scope and areas of inquiry.”

Mueller delivered his report to Barr three weeks ago, capping almost two years of an investigation of possible Russian meddling that Barr said involved 19 attorneys, 40 FBI agents and analysts, 2,800 subpoenas, 500 search warrants and about 500 witness interviews. It has already led to convictions and sparked other investigations.

Barr released a four-page summary of the report then, saying it found clear evidence of Russian attempts to interfere, but no evidence that anyone in the Trump campaign “conspired or coordinated” with the Russians on those efforts. It also said Mueller’s report was not able to conclude that Trump committed the crime of obstruction, “but also does not exonerate” the president.

Barr has insisted that he is under no obligation to release the report, but promised to release as much as possible, after deleting text relating to grand jury testimony, ongoing investigations, privacy and some other areas.

The report released Thursday was divided into two volumes, one dealing with Russian interference and possible collusion and one dealing with possible obstruction of the investigation by the president. While there were hundreds of pages of text, occasional pages were completely blacked out, along with passages and footnotes.

Rep. Raul Grijalva, D-Tucson, said the president and “his hand-picked Attorney General” may go “to great lengths to spin the Mueller investigation into nothing,” but the American people know the truth. (Photo by Keerthi Vedantam/Cronkite News)

At a news conference to release the report, Barr insisted that the findings of the full report matched the bullet points in his four-page summary last month.

“So that’s the bottom line, the special counsel confirmed that the Russian government sponsored efforts to illegally interfere with the 2016 Presidential election but did not find that the Trump campaign or other Americans colluded in those efforts,” Barr said Thursday. “The evidence developed by the special counsel is not sufficient that the president committed an obstruction of justice offense.”

But Arizona lawmakers read their own conclusions into the report.

“Mr. Barr absolutely stated very clearly that there was no Russian collusion, that was the basis of this whole investigation,” said Rep. Andy Biggs, R-Gilbert, in a video posted to Twitter, adding that the White House provided “hundreds of thousands, if not millions of documents” to Mueller’s team.

“There were many witnesses that testified, he instructed his White House to cooperate fully,” Biggs said. “So there was no basis for an obstruction of charge either. And in reality that should be the end of it.”

But Democrats said the report is far from the last word on the matter, and raises questions that need to be answered.

“What the Russians did to interfere with our elections in 2016 was a serious matter,” said Rep. Tom O’Halleran, D-Sedona, in a statement. “Now, Congress needs to proceed in a serious manner to review the evidence presented about Russian interference and the involvement of American citizens.”

While O’Halleran cited his background as a police officer in calling for “a thorough, bipartisan review,” Rep. Ann Kirkpatrick, D-Tucson, called on her career as a prosecutor to call for the full report to be released. And she criticized Barr for holding a news conference in which he “spoke more like Trump’s political armor press secretary than an impartial attorney general.”

“Mueller report suggested Congress take action on at least TEN instances where the president sought to interfere in the probe,” Kirkpatrick tweeted. “Bottom line, Congress and the American people have more questions, we need to hear from Special Counsel Mueller before we draw any final conclusions.”

Rep. Debbie Lesko R-Peoria, said she’s heard all she needs to hear, and repeated the Republican refrain that it’s “time to move on.”

“Today’s release of the Mueller report concludes that no Americans conspired with Russia to interfere in the 2016 presidential election,” Lesko said in a prepared statement. “Despite Democrats’ repeated attempts to claim otherwise, the report confirms there was no collusion or obstruction by President Trump or members of his campaign.

“The American people want us to focus on real issues – not partisan investigations by Democrats intended to undermine President Trump,” Lesko said.

That was echoed in a tweet by Rep. Paul Gosar, R-Prescott, who accused “Democrats and the Fake News media” of trying to mislead the public with attacks on Trump, while the report concluded there was “no obstruction and … no collusion.”

But Rep. Raul Grijalva, D-Tucson, said Trump has “mastered the art of deception” and has a “history of con jobs.” The feud over the Mueller report is no different, he said in a statement.

“I have no doubt that Trump and his hand-picked Attorney General will continue to go to great lengths to spin the Mueller investigation into nothing, but many of the important facts have been clear for a long time,” Grijalva said.

Rep. Jerry Nadler, D-New York, the chairman of the House Judiciary Committee, said he will issue a subpoena for the full report and underlying materials, and has asked Mueller to testify by May 23.