A bill in the Legislature would require online retailers who do not have a physical facility in the state to pay sales taxes on goods purchased by Arizona customers. Business advocates tout House Bill 2702 as a way to reduce the disadvantages of local brick-and-mortar businesses that compete with web-based businesses.

An Arizona business owner wrote of the woes of small businesses, which do pay sales taxes.

“We’ve been through a lot, including the rise of big-box stores and – more recently – online retailers. I’m not afraid of competition,” John Arterburn, owner of Pinnacle Peak Ace Hardware, says in an opinion column in the Arizona Capitol Times. “But, as an Arizona small business, it’s galling that my own home state has a tax code that places me at a distinct disadvantage with out-of-state competitors.”

The bill would affect such web-based businesses as Etsy and Wayfair, which do not have facilities in the state. Amazon, which has warehouses, does pay such taxes to Arizona.

“When laws like this are not enforced for all the businesses that sell the same type of goods,” Barr said, “then it’s bad for business in Arizona because that keeps less taxes in Arizona, it creates less jobs in Arizona, and these are things that contribute to the overall well-being of our community, like our parks being funded. We tend to forget how many people are employed by small businesses.”

Small and local businesses have a major impact on the state’s economy, employing 1 million people in 2015 and making up 99.4% of Arizona businesses. More than 6,000 small businesses are exporters in the state and generate 23% of Arizona’s nearly $21 billion in total exports.

But an Arizona tax expert said the bill faces challenges because of the state’s tax system, which has 93 city tax codes that cause discrepancies in various taxable goods and services across the state. Food shopping in Gilbert, for example, is taxed, but is tax free in Phoenix. But Phoenix’s retail tax is nearly 1% higher than Gilbert’s 8.6%.

“It would be nothing short of a nightmare” for out-of-state sellers to figure out their obligations in taxing consumers buying products in different cities, according to Kevin McCarthy, president of the Arizona Tax Research Association. Arizona is one of only four states that do not have a uniform tax code, he said.

McCarthy opposes the bill because Arizona taxes need to be simplified first, he said, but he supports local businesses’ need to compete fairly.

In June, the U.S. Supreme Court decided in South Dakota v. Wayfair that the state could require to collect sales taxes from out-of-state sellers. McCarthy said South Dakota won the decision because officials went to great lengths to simplify their sales-tax code. The state implemented computerized systems where remote sellers can tax consumers in the state.

“We think the state has to first address sales tax simplification in order to ensure that we are not legally liable for imposing an economic nexus law that the court won’t sustain,” he said. 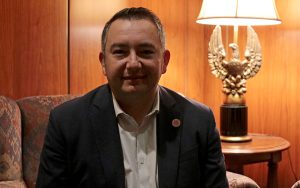 Republican Rep. Ben Toma introduced a bill that would require online retailers without physical facilities in Arizona to pay sales tax on customer purchases. He said it is much easier and sensible, from a public policy standpoint, to have businesses rather than customers pay a tax that would capture millions of dollars. (Photo by Meg Potter/Cronkite News)

Plot twist: Arizona already has a law to account for taxes that online retailers do not impose, called the use tax. Consumers are technically required to report such taxes to the Arizona Department of Revenue and pay them.

“Let’s be honest, virtually nobody does it, and so that tax essentially becomes unpaid,” said Rep. Ben Toma, who introduced the bill.

Toma, a Republican representing Surprise, Peoria and the Sun Cities, said it is much easier and sensible, from a public policy standpoint, to have businesses impose a tax that would capture millions of dollars.

A 2017 Government Accountability Office report estimated revenues states could gain by requiring that businesses collect sales taxes on all out-of-state sales. The report found that Arizona could have potential revenue gains from $190 million to $293 million by enacting an economic parity law.

In the U.S., 24 states have worked for decades toward simplifying sales and use-tax administration for an identical sales tax code.

Toma believes the bill is crucial to ensuring parity for small businesses. But he, too, favors streamlining Arizona’s messy tax system.

“If we don’t simplify,” he said, “we’d lose the ability to tax these transactions at all, which obviously would be detrimental to everybody here and to all the efforts up to this point.”

But the chance of city governments giving up their control to set their tax rates is slim, Toma and others said.

Arizona is still “the Wild West in many ways,” Toma said, with a longstanding culture of local autonomy and a “libertarian undertone.”

Since mid-February, there had been no movement on the bill.