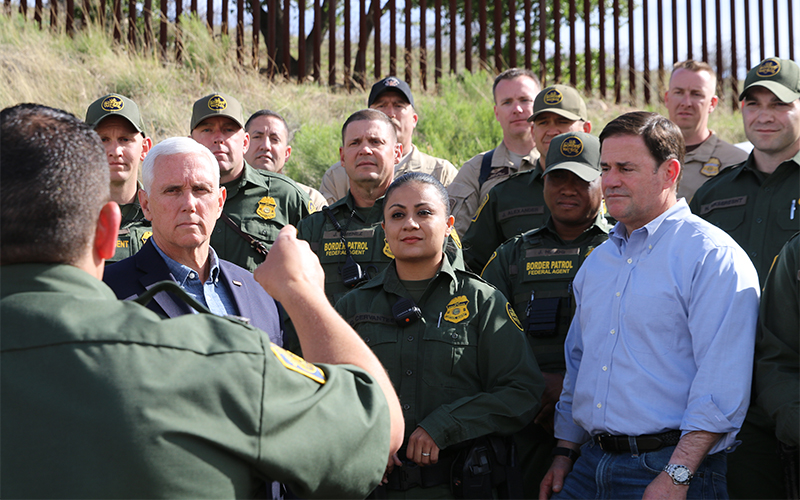 Standing with Gov. Doug Ducey near the razor-wire-strewn steel fence that separates the cities, Pence called on Democrats in Congress to fix what he called the “magnet of our broken asylum system.” (Photo by Mia Armstrong/Cronkite News) 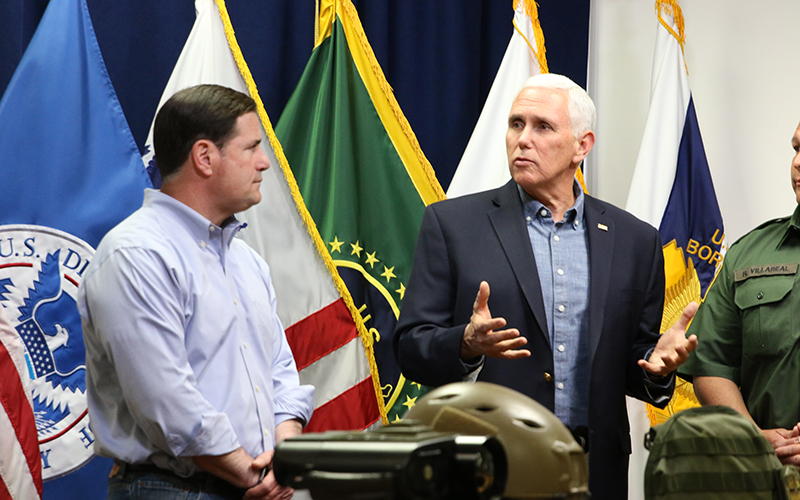 NOGALES – Vice President Mike Pence on Thursday inspected the border fence that separates this border city from its Mexican neighbor and blamed Democrats for inaction on what the Trump administration calls a “security and humanitarian crisis.”

Standing with Gov. Doug Ducey near the razor-wire-strewn steel fence that separates the cities, Pence called on Democrats in Congress to fix what he called the “magnet of our broken asylum system.”

“You’re doing your job, the president’s doing his job, it’s time for the Democrats to do their jobs,” he told a group of Border Patrol agents.

Although the administration is not considering restarting its controversial policy of family separation, Pence said, he called for an end “catch and release” policies and to “amend court decisions” related to the detention of minors and their family members. Pence was referring to the 1997 Flores Settlement Agreement, which establishes limits on the length of time and conditions in which immigration authorities can detain minors who crossed into the U.S.

Legal advocacy groups have come out against such changes championed by the Trump administration.

“These regulations would eliminate long-standing, court-mandated protections for minors, resulting in more families, including young children, being detained for longer periods of time,” Anastasia Tonello, president of the American Immigration Lawyers Association, said in a 2018 news release.

“Walls work. You all know that better than anyone,” he told the agents, adding that the administration also was looking at ways to fill staffing shortages within Customs and Border Protection and Border Patrol and modernize ports of entry.

Customs and Border Protection recently reported that apprehensions at the southern border for the first half of fiscal 2019 were nearly as high as all of 2018.

Nogales Mayor Arturo Garino was among opponents who reject the administration’s characterization of the southern border as dangerous or in crisis.

Garino and the Nogales City Council have asked the Trump administration to remove the concertina wire it placed along the downtown border fence earlier this year. Garino has said the wire represents a safety hazard and sends the wrong message to people in Sonora, Mexico.

In downtown Nogales, Evan Kory, whose family owns the retail stores Kory’s and La Cinderella, said he hoped Pence would discuss the problems faced by people crossing the border legally to shop in Nogales, especially with long border wait times.

“The crisis does not exist that’s being portrayed,” he said.

Both visits came after Trump threatened to close the U.S.-Mexico border entirely. He later walked back that threat, saying he would give Mexico a “one-year warning” to stop the flow of migrants crossing the southern border.

Civil liberties and immigration advocacy groups, including Amnesty International, have argued against the administration’s immigration policies, especially as they relate to asylum seekers, who have the right under international law to present themselves in the U.S. and have their cases processed for protection.

Pence last visited Arizona in March, when he expressed his support of Trump’s declaration of an emergency, allowing him to use federal emergency funds to build his long-promised border wall without congressional approval. That declaration is now before the courts.

In a statement, Arizona Chamber of Commerce CEO and President Glenn Hamer emphasized the economic importance of cross-border trade.

“The White House should also stop its threats to close the border completely. Not only would a closure be an economic catastrophe, but it is doubtful that it would have any effect on the migration patterns from Central America,” Hamer said.

Garino said 65 to 70 percent of the sales tax Nogales collects comes from Mexicans who cross the border legally to buy products in Nogales and throughout Arizona.

Environmental groups also have spoken out against the concertina wire and the administration’s border policy.

“Pence should be ashamed to show his face in Nogales or any other borderland community,” Laiken Jordahl, borderlands campaigner at the Center for Biological Diversity in Tucson, said in an email.

“Unless Pence is here to take down the vile razor wire his administration strung through this safe community, he should pack up and go home. It’s disgusting that Pence and Trump keep demonizing these border cities and then using them as props. It needs to stop.”

Hamer said the longterm solution to border security involves “comprehensive immigration reform that enhances border security, boosts staffing at the ports to process trade and travel while also interdicting contraband, overhauls our outdated visa laws, and once and for all addresses those undocumented individuals already here, including the estimated 800,000 individuals in an undocumented status who were brought to the U.S. as children.”