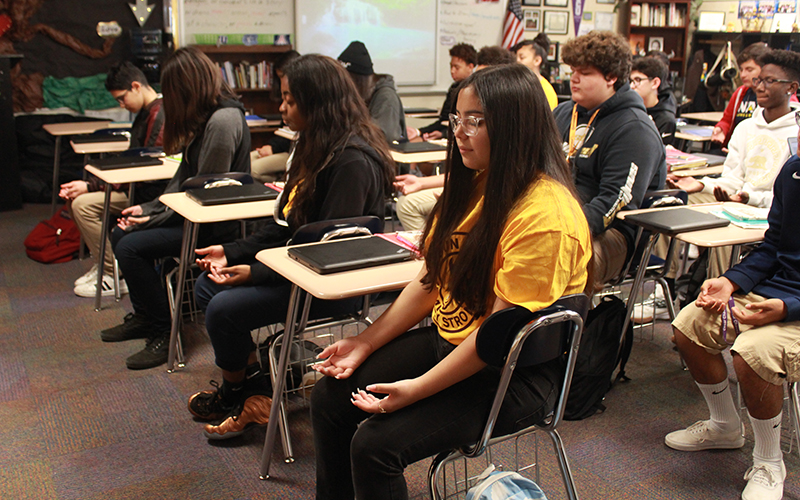 LAVEEN – It is a Friday morning at Laveen Elementary, where students have a choice about how they can start their day. Recess. Or Yoga.

When the doors open, children of all ages walk in, some with yoga mats in hand. Soon, their eyes close as they inhale and exhale, ready to be led in a quick yoga session by Gavin Tucker, an eighth-grade English Language Arts teacher.

“I am a leader, not a follower. I show peace, I show gratitude,” the students repeat after the man they know as Mr. Tucker. “We are one.”

What is happening at Laveen may surprise some. Not only is there an early morning yoga class for all students, but a midday one that complements detention. The space is known as the Mind, Body and Spirit Room.

“At home, I have something bad going on, but when I walk in there, I feel it’s a brand new me and I need to start getting my behavior (in order),” eighth-grader Kayla Dunbar said. “And when Mr. Tucker talks, I go through how I shouldn’t disrespect my mom and then my sisters and how I should pay attention to myself and not other people.”

Like Tucker, many believe in yoga’s healing effects, especially for youth dealing with anxiety, the most common mental disorder of that age group, according to the Substance Abuse and Mental Health Services Administration. Too often, the organization reports, the anxiety is neither detected nor treated.

“The students have taken on this amazing role,” said Lauryn Perrotti, a special education teacher at Laveen.

“It’s something serious for them, and when they walk into the gym in the morning and they see the yoga mats already set up, the music is on, it sets the tone and the students really come alive. It’s very important to them. They take it very serious, and they also carry it out through their entire day, which is amazing.”

This is the second full year that Tucker and his wife, Jackie, have led the school’s Mind, Body and Spirit Program, which was started with Tucker’s after-school program Live Pure Kids, which encouraged students to make healthier choices. Jackie Tucker had just finished her yoga certification at the South West Institute of Healing Arts and was asked by her husband to come to Laveen Elementary and do exercises with the students.

The idea came from Gavin Tucker’s personal experiences growing up.

“A lot of the times I would act out in anger,” he said. “It wasn’t because I was trying to be a bully or anything like that, it was because I was dealing with a lot of emotions on the inside and I couldn’t concentrate that well, so I started thinking here at school, let’s try a reset room.”

Because of social media, Gavin Tucker said, “we know exactly what’s going on in our country when it comes to teenage suicides, school shootings, violence. “Our children need to know how to tap in within themselves, self-regulate, and know that they have the most powerful tool to guide them through their journey in life.”

Other teachers at the school say they are on board.

“I love that I’m at a campus where they are so willing to try new things,” Perrotti said. “So yeah, let’s replace this so-called detention right away, with that intervention of ‘let’s self-reflect.’ Let’s really get to the root of the problems.”

A 16-week study by the University of Arkansas that implemented yoga for students in kindergarten to third grade showed a significant decrease in anxiety and improvements in the ability to focus, according to Mackenzie Rosenberg’s article Reducing Anxiety in Elementary School Children by Implementing Yoga.

“I’ve seen changes from panic attacks to no more panic attacks, “said Jackie Tucker, who spoke of students who previously lashed out in class but are now using breathing and calming techniques to self-regulate. “Now they’re learning that they don’t sometimes have to come in here because they are learning the tools they need to be out in the real world when things like that happen and there’s no MBS room.

“When the parents come in they are blown away because a lot of the kids they just didn’t know what to do with anymore started taking the program. And they’re are just becoming more and more involved because it’s not just helping the child, it’s making a huge impact at home.”

The Tuckers hope to expand their program not only districtwide, but nationwide.

CORRECTION: A previous version of this story misstated information about the program and its measured success because of incorrect information provided to Cronkite News. The story has been corrected, but clients who used earlier versions are asked to run the correction that can be found here.