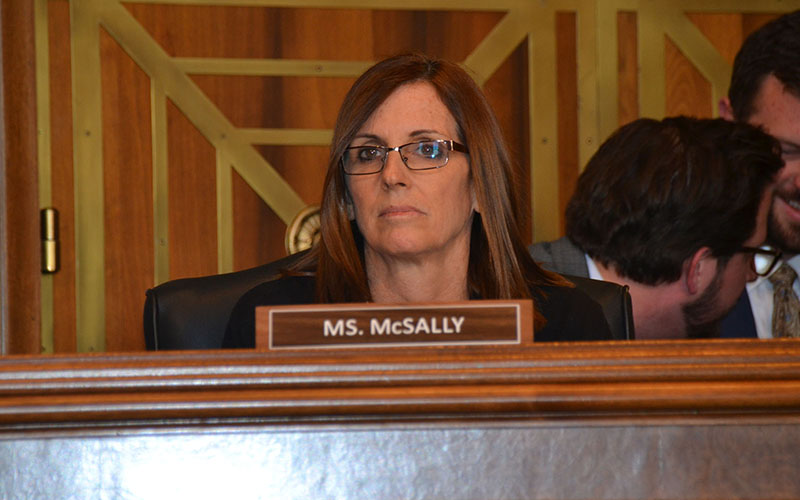 Sen. Martha McSally, R-Arizona, listens as witnesses before the Senate Indian Affairs Committee describe the problems of federal maintenance of roads on tribal lands, and its affect on other aspects of trbal life. (Photo by Keerthi Vedantam/Cronkite News)

Of the web of tribal, county, state, and federally owned roads on the Gila River reservation, 306 are supposed to be maintained by the Bureau of Indian Affairs. But Lewis told a Senate committee Wednesday that the BIA is doing a dismal job.

Some of the BIA roads are unpaved, others are cracked and bumpy, and others are missing critical safety features like stop signs and traffic lights.

“Our transportation problem is representative of what you see across the nation,” Lewis told the Senate Indian Affairs Committee. “These roads carry our tribal citizens, members of our local community, our school children, law enforcement, emergency services and patrons to our businesses.”

Witnesses at the hearing said road problems lead to students skipping school after heavy rains because buses could not navigate the roads, and Bureau of Indian Education schools shelling out money for buses that have to operate on dangerous roads.

Poor roads also affect tribal members’ ability to get to pharmacies, jobs and businesses, which are often spread out on reservations.

“Transportation infrastructure continues to be a critical part of the well-being of tribal and rural communities,” said Leroy Gishi, chief of the BIA’s division of transportation. “One of the many barriers to economic development in Native communities is the lack of physical infrastructure.”

Because the roads are federally owned, tribes are unable to fix the problem, even though they can: Lewis said that when the tribe formed its own department of transportation in 1997, it quickly improved the condition of a number of roads it took over from the BIA.

The problems with federal control even make it hard for tribes to gauge the scope of the problem. BIA crash-report forms can vary from reservation to reservation, according to the Tribal Transportation Program.

“The data collection is not there so you don’t actually have those numbers of those fatalities and those accidents that happen on those roads,” Lewis said. “We need up-to-date, consistently collected data.”

A bill introduced by Sen. John Barrasso, R-Wyoming, would increase funding for bridges and infrastructure upkeep of roads on reservations, as well as requiring uniform crash reports to keep track of road problems across Indian Country. Sen. John Hoeven, R-North Dakota, highlighted the bill during the hearing, saying it would fix the problems left behind by previous attempts to fix roads in Indian Country.

Sen. Tom Udall, D-New Mexico, emphasized the need to for better legislation to improve roads on tribal lands, calling it a necessary piece to help tribes improve everything from education to business.

“The bottom line is that the federal government must do more to provide the resources necessary to ensure Native communities’ transportation needs are addressed so they can get to their jobs, homes, hospitals and schools,” Udall said. “And we need the data at the federal, state and tribal level to support those needs.”

As for Lewis, any advancement to what he sees as longtime neglect for roads can’t come soon enough.

“If those roads aren’t maintained … that’s a trust responsibility that the federal government has to upkeep,” Lewis said. “That’s that.”