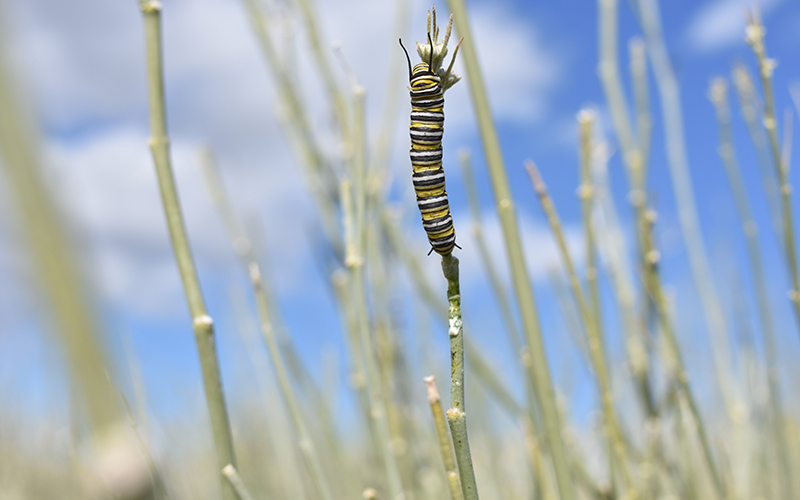 Monarch caterpillars eat away at milkweed before retreating into a chrysalis and emerging as butterflies at Sunnylands Center and Garden in Rancho Mirage, California. (Photo by Jose Ivan Cazares/Cronkite News)

RANCHO MIRAGE, Calif. – Debra Loney hunches over a batch of milkweed, then gets on her hands and knees to scour the plants for elusive monarch caterpillars and eggs. It’s no easy task: The eggs are no larger than a grain of sand.

“I’m bringing knee pads next time,” said Loney, 64, who lives in Palm Springs. “My boney knees are starting to ache.”

Debra and her husband, Mike Loney, are citizen scientists who spend hours of their free time at the Sunnylands Center and Garden in Rancho Mirage, 120 miles east of Los Angeles, searching for signs of monarchs. They have joined scores of other volunteers to collect data that might help increase understanding about the iconic orange and black butterfly, whose population has plummeted in the past few decades.

Some monarchs travel up to 3,000 miles to reach the California coast and the mountains of Michoacan in west-central Mexico, to escape the winters in the northern U.S. and southern Canada, according to the U.S. Department of Agriculture.

They generally arrive in California and Mexico in late October; Mexican folklore says they’re carrying the souls of the departed for Day of the Dead. The trip back north from their wintering sites takes four generations to complete, according to the University of Minnesota‘s Monarch Lab research.

Because the butterflies travel such a far distance over an extended period of time, it’s critical to understand where – and how – they’re moving. Michaeleen Gallagher, who directs education and environmental programs at Sunnylands, said citizen scientists play a significant role in collecting and sharing data.

“The more sets of eyes we have on areas, the better,” she said. “Locals know their communities. They know what they’re looking for, and so they’re a great resource.” 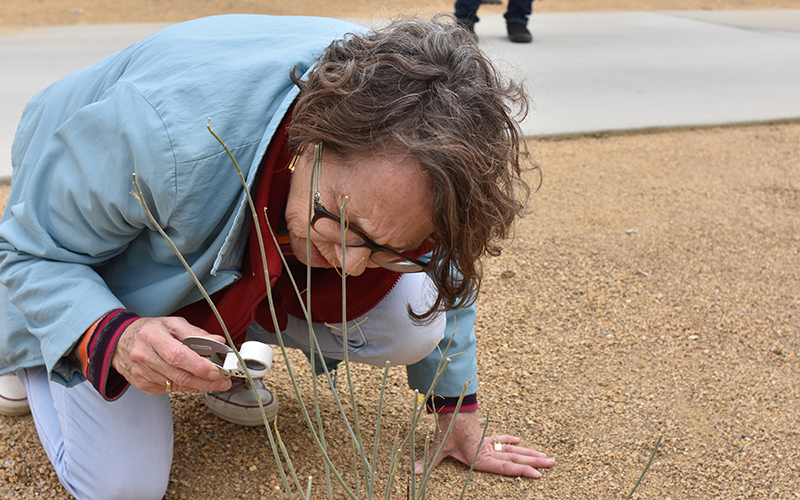 Debra Loney looks for monarch eggs at Sunnylands Center and Garden. She was inspired to volunteer as a citizen scientist after witnessing a large migration of monarchs while in Palm Springs. (Photo by Jose Ivan Cazares/Cronkite News)

And that means every Tuesday during migration season, volunteers at Sunnylands get on their hands and knees to count caterpillars and eggs on milkweed – a stalky, green wildflower of the genus Asclepias – to collect an accurate count.

Kim Pegram, an insect ecologist and exhibit specialist at the Desert Botanical Garden in Phoenix, told Cronkite News last year that a female monarch “will seek out milkweed to lay her eggs on because it’s the only thing her caterpillars can eat. If they don’t have milkweed plants, they don’t survive.”
The milkweed serves as the perfect backdrop to count the insects, but it’s tricky work. The black and yellow caterpillars are no larger than 2 inches and blend in to the desert landscape as they cling to milkweed.

“I think I see one, a short, fat one,” Mike Loney shouted to the seven volunteers on a recent count. The volunteers huddled around a magnifying glass.

Mike Loney has fond memories of monarchs and remembers when they were more common.

“All the different stages (monarchs) go through I find fascinating,” he said. “The numbers seem to be declining, and it’s very important to be tracking and following them to find out where they go.”

Although crawling around isn’t easy for Debra Loney, she said the effort is worth it if it can help sustain the butterflies. National Geographic described their migration as one of the “greatest natural events on Earth.”

“We were in the Indian Canyons in Palm Springs, and we witnessed a large migration,” Debra Loney said. “It was very spiritual for someone that’s not particularly religious in a conventional way.”

Monarch butterflies in North America have dwindled to the point that they’re being considered for protection by U.S. Fish and Wildlife Service under the Endangered Species Act. The Center for Biological Diversity, based in Tucson, sued the service in 2016 for failing to make a decision on the monarch’s endangered status, and a settlement requires the service to make a decision by June, according to the center’s website.

But the monarch butterflies’ population fluctuates. The annual count by the Xerces Society, a nonprofit dedicated to the conservation of invertebrates, suggests that the number of monarchs overwintering along the California coast was reduced from an estimated 192,668 in 2017 to no more than 30,000 in 2018. The number roosting in Mexico, though, seems to be higher than it has been in a decade.

“We’re always getting new information,” Gallagher said. “The news about the numbers in California left a lot of people devastated, but then the numbers from Mexico started coming in.”

There’s still a lot to learn about the monarch’s behavior, she said, and some researchers believe the insects are adapting by changing where they overwinter.

Some monarchs travel up to 3,000 miles to reach the California coast and the mountains of Michoacan in west-central Mexico, to escape the winters in the northern U.S. and southern Canada. (File photo by Mallory Price/Cronkite News)

The monarchs’ overall decline is due to a combination of factors, including habitat loss and climate change, according to Francis Villablanca, a professor of biological sciences at California Polytechnic State University, San Luis Obispo. He leads Monarch Alert, a citizen-based research project backed by graduate student researchers and faculty from Cal Poly.

Habitat loss, Villablanca said, “translates to loss of milkweed and loss of nectar in an environment, but climate change is becoming more recognized as a probable threat.”

The monarchs only lay eggs on milkweed, which often is removed for farming and development, he said. The eggs also are affected by some pesticides and herbicides.

Villablanca said the butterflies rely on environmental cues, particularly temperature, to start reproducing, migrating and hibernating, so a warmer, drier climate is affecting this.

Tara Cornelisse, a senior scientist with the Center for Biological Diversity, said the upswing in the eastern population is likely due to favorable weather during the spring and summer along their migration routes. However, she said there isn’t enough data to explain the fluctuation in numbers yet.

The work of citizen scientists

In January, Sunnylands partnered with the Southwest Monarch Study, an Arizona-based nonprofit, to educate and train people to tag butterflies.

Perhaps the most beneficial information citizen scientists provide is where the butterflies migrate from, and where they go once they leave. They tag butterflies with unique tags so that citizen scientists in other parts of North America can document where they came from. They also document any encounters with tagged butterflies that originated in other parts of the continent. The data collected is being shared using the online forum Journey North, which is funded through the Annenberg Foundation.

A history of citizens helping with science

Citizens tagging butterflies is what led to the discovery of the monarch’s overwintering sites in Mexico in 1976.

In a National Geographic article in 1976, Canadian zoologist Fred Urquhart, who had developed a way to tag monarchs without impairing their ability to fly, described a mountainside in western Mexico so packed with monarchs that branches 3 inches thick would break from the butterflies’ weight. 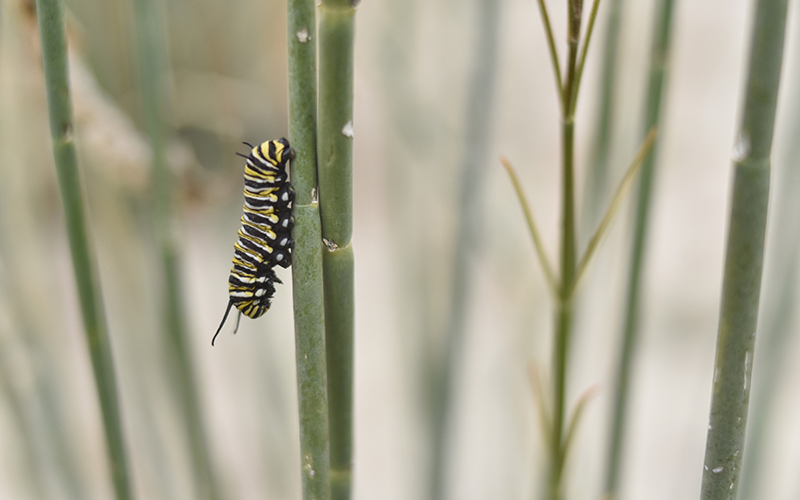 Volunteers count the number of eggs and caterpillars at the Sunnylands garden as part of research and conservation efforts. They also tag butterflies to find out where they’re migrating from. (Photo by Jose Ivan Cazares/Cronkite News)

“They swirled through the air like autumn leaves and carpeted the ground in their flaming myriads on this Mexican mountainside,” he wrote, detailing the discovery of the overwintering site of monarchs living east of the Rocky Mountains.

Urquhart had developed the monarch tags in 1940, but he and his wife, Norah, also a butterfly scientist, needed help tagging and reached out to the public in 1952. The tag the Urquharts found in the Sierra Madre Occidental in 1976 had been applied the year before by a citizen scientist thousands of miles away in Chaska, Minnesota.

Today, thousands of volunteers help track the butterflies across the U.S. Villablanca said the crucial role citizen scientists play in protecting and understanding the monarch is undeniable.

“I wouldn’t be able to do my work without the public,” he said. “There aren’t enough researchers to collect the data needed. Technology has made sharing information instant, so it’s easier than ever to get involved.”

People are passionate and can make a difference, but it’s important to be informed to avoid contributing to the problem, Villablanca said, adding, “A lot of the work we (conservationists) do is educational.”

That includes selecting the proper type of milkweed to plant. Tropical milkweed stays year round, Villablaca said, which keeps monarchs from migrating, and that in turn, can cause an infection in the butterflies. Desert milkweed (Asclepias subulata) should be planted, he said, because it follows the seasons, just as the monarchs do.

Gallagher with Sunnylands Center and Garden said there is “a huge potential for the public to contribute to science, and in particular to contribute data to scientists.”

“The more people are providing data, the more observations we can make,” she said. “For example, if there were to be thousands of monarch sightings in California, and there were very few when we count at the overwintering sites then, we’d know that all those monarchs are non-migratory.”