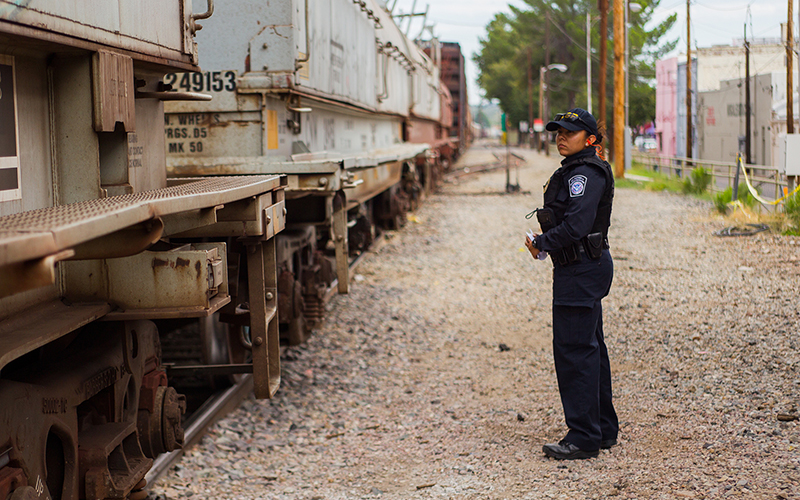 WASHINGTON – President Donald Trump repeated threats Monday to deal with a surge of migrants by closing the U.S.- Mexico border, a move that has been called a potential “economic catastrophe” for Arizona.

The threat came late last week, as Customs and Border Protection said it had 12,000 immigrants in custody – double what it considers “crisis level” – and was on track to apprehend 100,000 for the month of March, the most for that month in a decade.

CBP has started releasing immigrants into the community once they are processed for court hearings, sparking an outcry from immigration advocates and opponents alike.

Trump blamed the surge on Mexico and the three Central American countries that many migrants are fleeing. He threatened to close the border and to cut off foreign aid to El Salvador, Honduras and Guatemala unless they took steps to stem the migrants.

“If they don’t stop them, we’re closing the border,” Trump told reporters Saturday. “We’ll keep it closed for a long time, I’m not playing games.”

That threat raised alarms from critics who said shutting the border would mean cutting off trade with the country’s third-largest trading partner, trade that was worth $16.7 billion to Arizona last year.

“A closure of the U.S.-Mexico border would be an economic catastrophe,” said Glenn Hamer, president of the Arizona Chamber of Commerce, in a statement.

The statement said Mexico is the first- or second-biggest trading partner with 27 states, and that trade between the two countries averages $2 billion per day.

Even the president’s supporters conceded that closing the border would have an impact, but they said the situation at the border calls for drastic action.

Rep. Andy Biggs, R-Gilbert, in an interview Monday on Fox Business, said closing the border would “cause economic distress throughout Arizona and the rest of the country.” But he said Trump has “few options,” with Congress unwilling to fund a border wall and unable to pass immigration reform. For that reason, Biggs said he could support a temporary closure to “inspire Mexico to do what it needs to.”

….through their country and our Southern Border. Mexico has for many years made a fortune off of the U.S., far greater than Border Costs. If Mexico doesn’t immediately stop ALL illegal immigration coming into the United States throug our Southern Border, I will be CLOSING…..

Trump said he would act this week, but it’s unclear if or when a shutdown might come. But Secretary of State Mike Pompeo confirmed Monday that the president is “working to set the conditions” of the funding cuts to the three Central American countries.

Also Monday, the Department of Homeland Security said it was redeploying 750 CBP officers to the border in “emergency surge operations” backing up Border Patrol agents.

Sen. Martha McSally, R-Arizona, who convened a roundtable Monday to discuss CBP’s release of immigrants, said afterward that it is important “to keep the legitimate trade and travel and cross-border commerce happening at the ports of entry.” But she added that something must be done at the border, and echoed Trump’s call for Mexico to do its part.

“It’s important for our economy, but Mexico needs to step up and address this issue, and the countries in Central America need to do their part as well,” she said.

Critics said a shutdown will not stop immigrants, but it will hit the economies of both countries. Santa Cruz County Sheriff Tony Estrada called shutting down ports of entry the “weirdest, most crazy thing I’ve ever heard.”

He said the “worst-case scenario” of a complete border closure would have an immediate impact.

“The people, the tourism, the relationship, international commerce, everything is going to be impacted only because the current administration doesn’t care,” Estrada said.

Hamer said the impact would be felt not just in Arizona but across the country.

“U.S. exporters’ products would be cut off from a critical market,” his statement said. “Prices here would spike almost immediately as domestic supplies dwindled due to imports being blocked from crossing the border.”

But Ira Mehlman, media director for the Federation for American Immigration Reform, echoed other supporters who said Trump has been painted into a corner and needs to send a message to Mexico.

“It can certainly help regain control of the border, which is to everyone’s benefit,” Mehlman said. “It is certainly in the interest of the American people to have a border that is under some kind of reasonable control.”

He laid the blame at Congress’ feet.

“If they are not going to give the president other options for dealing with this, then they have only themselves to blame,” Mehlman said.

David Bier, immigration policy analyst for the Cato Institute, said the potential closing would “have a huge effect on the economies along the U.S.- Mexico border.” But he also said it would have political consequences for Trump.

“It would have devastating political consequences if he shut it down immediately overnight, which is the threat the president keeps reiterating,” Bier said Monday.

Despite the president’s threats, Bier said he does not believe the border will be closed in the next few days.

“He’s reiterated it, he’s put a deadline on it, but I don’t think that the president is going to shut off all trade and travel with the third-largest trading partner of the United States,” he said. “This would impact probably at least 5 million jobs in the United States that are dependent on the trade.”

But Estrada is beginning to think anything’s possible.

“I thought that would have been the most ludicrous and ridiculous thing possible,” he said of the shutdown threat. “And yet, now that I hear the president talk about that, I say, ‘My God, it could be a possibility.'”