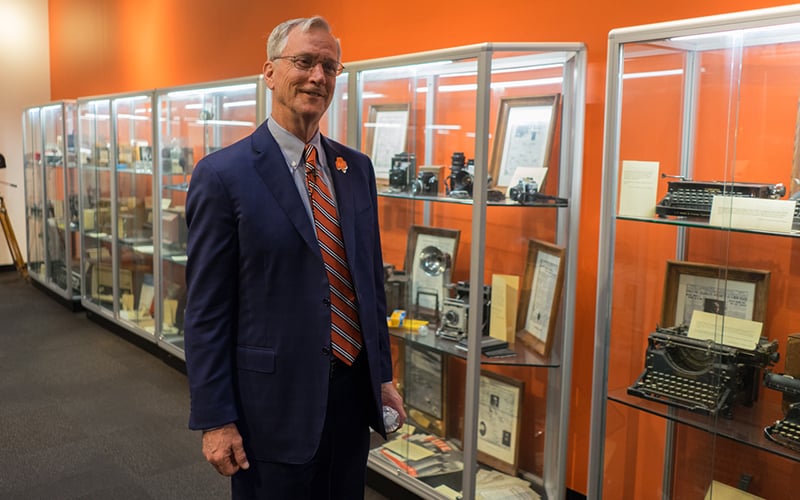 George McCaskey, chairman of the Chicago Bears, shares some insights from the NFL Annual League Meeting into the expanding role of women in football. McCaskey, an alum of Arizona State University, run the day-to-day operations for the Bears while his mother is the owner of the team. (Photo by Victor Ren)

PHOENIX — NFL owners, executives and coaches gathered in Phoenix recently for the Annual League Meeting to discuss league business and potential rule changes on and off the field.

One of the discussions pertained to diversity in football operations and front office jobs by improving and enforcing current NFL policies. More specifically, is the league fulfilling its commitment to look at female candidates?

Earlier in the week, coach Bruce Arians and the Tampa Bay Buccaneers became the first NFL team to hire two female coaches on staff. Maral Javadifar was hired to be the assistant strength and conditioning coach and Lori Locust was brought in to be the assistant defensive line coach.

“They are just a good fit for what we need. The fact that their gender is different, who gives a s—?” Arians said.

The NFL instituted in 2003 a policy commonly known as the “Rooney Rule” that requires every team to interview at least one or more diverse candidates when filling head coaching vacancies and has since been expanded to include football operations and front office positions.

Only a few teams in the NFL currently have female executives, one of which is the Chicago Bears, whose Chief Financial Officer, Karen Murphy, has served in an executive role for more than a decade. The chairman of the Chicago Bears, George McCaskey, attended a speaking event at his alma mater, Arizona State University, after the conclusion of the meetings and discussed the changing landscape of women in the NFL workplace.

“Just like any diverse candidate, we need to continue to be proactive in enforcing and enhancing the Rooney Rule to provide those opportunities,” McCaskey said. “One thing that we were just discussing at the league meeting was providing opportunities on the offensive side of the ball because more and more head coaches are coming from the offensive side.”

Arians brought up that nearly 25 years ago when working at Mississippi State, he knew of a female coach at Hinds Community College, Dot Murphy, who was one of the best wide receivers coaches he had ever seen.

“So when somebody asks me, ‘Can women coach?’ Hell, yeah. I’ve even seen it. It’s just getting opportunities.”

With the Arizona Cardinals, Arians was the first head coach to hire a female coach of any kind when he brought in Jen Welter to work with inside linebackers as an assistant coaching intern during spring camp and the preseason.

In celebration of the NFL’s 100th season, NFL Films premiered a documentary, A Lifetime of Sundays, that highlights the role of four female owners that shaped NFL history. Virginia McCaskey, owner of the Bears and George McCaskey’s mother, is one of the four pioneering women in the movie.

“It was such a touching tribute to four people who have spent their entire lives in and around the great game of football,” George McCaskey said.

He views his mother as a pioneer for women in sports, but thinks that she should give herself more credit for her trailblazing ways.

“She doesn’t really see herself as a pioneering woman which I think is a shame because I think she is,” he said. “She considers football to be a man’s world and she just got thrust into this position, circumstances dictated her fate, not anything she did in particular.”

He added that women who see his mother as an inspiration and role model send letters to the Bears’ headquarters addressed to her.

“I don’t think she gives herself enough credit, George McCaskey said. “I open her mail that comes to Halas Hall and a lot of them are letters from women who say, ‘I look up to you,’ ‘I admire you,’ ‘what advice can you give me?’”

Earlier this year, Toni Harris became the first female football player at a skill position to receive a football scholarship at a four-year university when she committed to play at Central Methodist University.

On the topic of women potentially playing in the NFL, George McCaskey’s response is simple.