Twenty-two seasons, 14 straight NCAA Tournaments and 444 victories, the most in ASU women’s basketball history. Only one thing has eluded her:

Her players want to get her there.

“I’ve been to a Final Four multiple times, so I just want that for her, to be honest,” said senior Courtney Ekmark, who won two national championships at Connecticut. “That’s what makes it special, when you’re playing for something other than yourself.

“I know that our whole team wants it for her, too, because she works so hard. She’s an amazing coach so I think we’re just going to give it everything we have and take it one game at a time.”

The Sun Devils face No. 1 seed Mississippi State today in a Sweet 16 game at the Moda Center. A victory would leave ASU one game away from a Final Four.

In a crowded sports market, Turner Thorne hasn’t always grabbed the headlines. Many of the stories written about her early on focused on her ability to juggle coaching and motherhood. But her longevity is widely applauded in a profession where long-term success is rare. 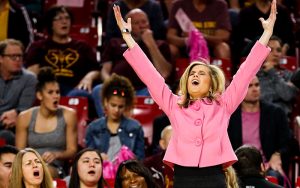 Charli Turner Thorne, who has led the Arizona State women’s basketball team to seven straight NCAA Tournament appearances, said she isn’t preoccupied by how far the Sun Devils had to travel. (Photo by Anya Magnuson/Cronkite News)

She is not only the winningest coach in ASU history but is second in the Pac-12 in career wins behind Basketball Hall of Famer and Stanford coach Tara VanDerveer.

Before being named ASU coach in the 1996-97 season, the Sun Devils had made the NCAA Tournament three times in its history.

It all changed under Turner Thorne, who has led the Sun Devils to school-record sixth straight.

After suffering three straight losses in the second round, the Sun Devils broke through last weekend in Coral Gables, Florida, defeating the Miami Hurricanes 57-55 to reach the Sweet 16 for the first time since 2015.

“I’m really just happy for this group. They’ve been a second-round group. They’ve been to the NCAA Tournament every year, but they had not advanced to the regional round,” Turner Thorne said. “I think we all expected this year’s team to be here, but you can say that any year. I’m just so happy and proud of them that they did that.”

“She (Turner Thorne) watches more film than any coach in the country. She always has us prepared,” Ekmark said. “I’m just really happy that her hard work has paid off and we’re able to get here for her.”

“Just being able to make it this far for her means a lot, especially for our team because we know how hard she works,” Ibis said.

Sophia Elenga, a transfer from Cochise College in Douglas and native of Nogent Sur Oise, France, said Turner Thorne has believed in this team since last summer.

“This is really awesome for her, especially at the beginning of the season when we were doing summer training,” Elenga said. “She’s always been saying that she believes in us, and she believed that we can go as far as we are today.”

Turner Thorne has been known in her career to get the most out of her players, getting the team to play hard for 40 minutes despite not having the biggest stars.

“I think she’s (Turner Thorne) been able to do that by being honest in practice every single day, not to take a possession off in practice. Whatever happens in practice translates to the game.”

No matter what the situation prevents, players say Turner Thorne hasn’t stopped encouraging them to move forward and grow.

This isn’t the first time the two teams have faced each other. They met last year in Cancun, Mexico, where the Bulldogs won 65-57 after ASU led the game entering the fourth quarter.

Having reached this stage of the NCAA Tournament, it’s all about letting loose and soaking in the moment.

“Now, it’s just really fun. We’ve played the best teams in the country,” Turner Thorne said. “This team knows what they need to do. It’s just a matter of doing it.”