PHOENIX – Arizona lawmakers could allow employers to slash the minimum wage for young part-time workers to as low as $7.25 an hour, a measure that drew a contentious crowd of supporters and opponents to a Senate committee hearing Thursday.

The Commerce Committee approved House Bill 2523, sending the measure to the full Senate and extending a boisterous debate. 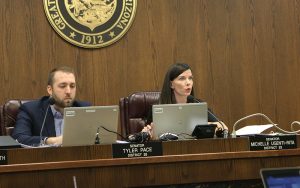 Senate Commerce Committee vice chairman Tyler Pace and Chair Michelle B. Ugenti-Rita voted in favor of a bill that would lower the minimum wage for certain young workers. (Photo by Erica Figueroa/Cronkite News)

Some business owners support the bill, which would pay students who work part time and are younger than 22 the federal standard rather than the state minimum wage of $11 an hour. Supporters said it makes economic sense to pay young people less than more experienced employees, and it allows businesses to hire more people.

“It gives them (employers) more flexibility to find those certain individuals between those ages that are working part time and plug them in,” said Joe Galli, senior public policy advisor for the Greater Flagstaff Chamber of Commerce.

College student Elizabeth Thorley was among those at the Thursday hearing who disagreed, saying the bill would allow employers to discriminate against young people.

She said her job helps pay her tuition at Arizona State University, car note, medical expenses and other bills. And, as someone with a chronic illness, she said she was concerned that a lower minimum wage also would harm people with disabilities.

“I beg of you, please don’t throw young and vulnerable Arizonans’ lives into fear and chaos,” Thorley said, directing her next remarks to the hearing room’s audience. “And if you stand with me, if you stand with young workers, and if you stand against the creation of the separate wage class, please stand.”

Many did, in silence. 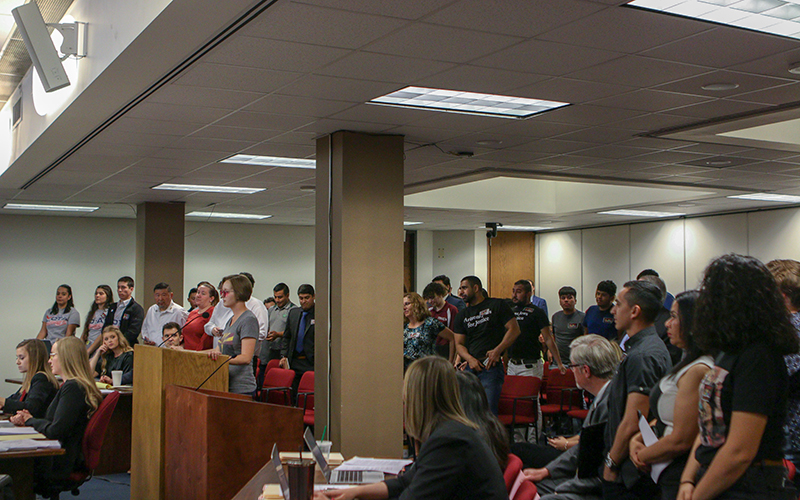 ASU student Elizabeth Thorley asks people to stand in opposition to a bill that would lower the the minimum wage for students who work part time and are younger than 22. (Photo by Erica Figueroa/Cronkite News)

Bill opponents also said a decrease in the minimum wage would mainly hurt students who must pay bills with little financial help or who are primary breadwinners.

Sen. Sean Bowie, D-Phoenix, said it’s illegal in Arizona for an employer to discriminate against a worker based on age.

Rep. Travis Grantham, who sponsored the bill, said companies will not pay a high hourly wage to someone with no experience.

“I don’t see it as discriminatory when we’re opening up a job opportunity for someone who’s been priced out of a job market,” the Gilbert Republican said.

The federal minimum wage is $7.25, but many states and cities pay a higher hourly wage. In January, Arizona was among 22 states that increased the minimum wage.

That bump took Arizona’s minimum wage to $11, part of a gradual hike that voters approved in 2016. The minimum wage is expected to reach $12 an hour by 2020.