The Diamondbacks will use B1K synthetic grass at Chase Field this year, marking the first time in their 22-year history the team will use turf instead of grass. (Photo by Tyler Rittenhouse/Cronkite News)

PHOENIX – The 2019 Major League Baseball season kicked off Thursday and both the league and the Arizona Diamondbacks, who lost their opener to the Los Angeles Dodgers, have undergone changes on the field and in the stands.

The Diamondbacks will start the season with turf instead of grass for the first time in their 22-year history. The team made the switch to B1K synthetic grass, which MLB.com reports is designed specifically for baseball.

The switch will have a positive impact on the temperature inside the stadium and also will save the team about two million gallons of water per year.

The team introduced the turf at their spring training facility so their infielders could get used to how the surface plays.

Off the field, the Diamondbacks are taking a new step in fan engagement. The team has unveiled a virtual reality simulator where fans in attendance will get a chance to step inside and meet their favorite players.

Teams across all sports have been trying to integrate VR into the gameday experience. The simulator has an option to meet one of seven select players.

For the hungry fans in attendance, the Diamondbacks are introducing a variety of dining options across the stadium. 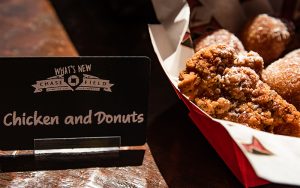 In addition to changes on the field, the Diamondbacks have added a variety of new food options. (Photo by Tyler Rittenhouse/Cronkite News).

Widely regarded as the highlight is the 18-inch Schreiner’s hot dogs with outlandish combinations of toppings. Three different dogs are being released throughout the season and will be available at Big Dawgs.

The first is the All Day Breakfast Dog. This one has country gravy, hash browns, bacon, hot sauce, cheese, fried egg and green onions and will be available for the first few months of the season.

Batting second in this lunch lineup is the Rueben Some Dirt On It Dog. Served on a rye bun, the dog is topped with reuben mac-n-cheese, fried pickles, secret sauce and green onions. This item will be available in June and July.

Last but not least is the S.I. Cover Dog. This comes on an onion bun with a bratwurst. It’s then topped with fried mac-n-cheese, jalapeño apple coleslaw, barbeque aioli, beer pickles and green onion, and will be the last dog sold of the season, available in August and September.

On the field, the 2019 version of the team will look different than its 2018 counterpart. Paul Goldschmidt and A.J. Pollock are gone, taking their combined 54 home runs and 148 RBIs with them.

To make matters worse, the Diamondbacks lost outfielder Steven Souza Jr. to a serious knee injury, suffered while slipping on home plate in a game on Monday.

Souza played in 72 games last season and was primed to be a key contributor this year. He suffered a torn LCL, ACL and PCL to go along with a posterior lateral capsule tear in his left knee and will undergo season-ending surgery.

To take his place, the Diamondbacks will turn to veteran Adam Jones, who was signed during spring training, and Jerrod Dyson, who joined the team last season.

Large losses are looming for the 2019 Diamondbacks but reasons for optimism as well. The team opens the season Thursday against the Los Angeles Dodgers at Dodger Stadium, and their home opener is against the Red Sox on April 5.