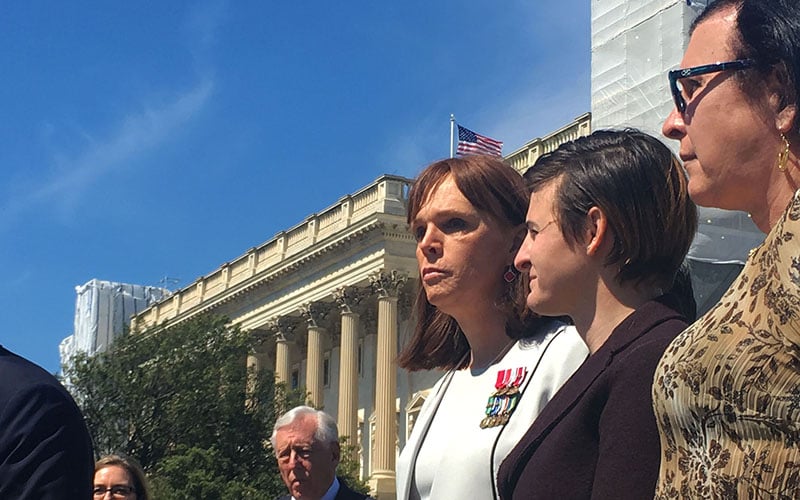 WASHINGTON – Two days after courts removed the last hurdle to a Trump administration ban on transgender military service, the House voted 238-185 Thursday to condemn the ban – but not block it.

Arizona lawmakers split along party lines, like most of the House, with Democrats supporting the resolution and Republicans backing the ban, which can take effect in as little as two weeks.

That leaves advocates like Capt. Jennifer Peace rushing to get other transgender service members diagnosed before April 12 to be grandfathered in under the current policy, which has allowed them to serve openly since 2016.

“After the Supreme Court stepped in and decided (in January) to allow the ban to go forward, we knew the last injunction would fall at some point,” Peace said of the Maryland injunction on the ban that was lifted Tuesday.

“So we’ve just been encouraging our members, if they’re currently serving, to come out, to get a diagnosis, to get grandfathered in and continue serving,” said Peace, who had to hide her gender dysphoria when she was posted to Fort Huachuca in 2009.

Arizona’s five Democratic House members were among the 217 co-sponsors on Thursday’s resolution, which had only one Republicans sponsor. In the final vote, five Republicans – none from Arizona – joined all voting Democrats in support of the measure.

The resolution says “transgender members of the Armed Forces have fought in defense of our freedoms with honor and distinction since our Nation’s founding and have been bestowed with such commendations and awards as the Bronze Star and Purple Heart for their courage and sacrifices.”

The resolution does not block the ban, it just condemns it. Bill to protect and retain transgender service members are pending in the House and Senate but nave not yet been voted on.

When it announced plans last year to reinstate the ban on transgender service, the Pentagon said it was making the move to improve military readiness and cohesion of military units.

But Rep. Raul Grijalva, D-Tucson, said Thursday that the ban is “nothing more than a cruel and shameful attack on the transgender community.”

“Today’s resolution rejects Trump’s discrimination and the bogus arguments this ban was based on, and reaffirms to the transgender community that their lives, rights, and futures matter,” he said in a statement after the vote.

President Donald Trump announced in a 2017 tweet that he would reinstate the ban that was lifted under President Barack Obama. Trump’s tweet was followed months of policymaking by the Pentagon, which announced its plan last year. That immediately sparked a number of legal challenges, the last of which was lifted Tuesday.

In testimony to the House Armed Services Committee in February, Acting Defense Undersecretary for Personnel and Readiness James N. Stewart objected to calling the new policy a “ban” against transgender service members, as it only applies to those who undergo gender reassignment surgery.

“This policy is not about transgender individuals,” Stewart said then. “This is about a diagnosis. This about gender dysphoria. We have members out there that are transgenders that are serving in their biological sex, meeting the standards as they are.”

The Palm Center, which studies sexual minorities in the military, estimates that there are more than 14,000 transgender service members currently, but only 6 percent of them are being treated. That leaves thousands who could be forced out of the military when the new policy takes effect.

Peace said the military should not be forcing out people who are serving honorably.

“This is actively blocking people who are qualified, capable and willing to serve from joining the military today,” she said. “There are people who have been talking to their recruiters for days, weeks, months, trying to join the military and so this is weakening our military and our national security.”

She said a ban affects more than just military readiness. The previous ban was still in place during her deployments to Iraq and Afghanistan, forcing Peace’s wife and kids back home to distance themselves from the Family Readiness Groups that are meant to support families during deployments.

“You have a group of people to rely on when your spouse is deployed, when your kid got sick or you were feeling lonely,” Peace said. But her wife and my kids “were used to using female pronouns for me. So we kind of quit participating in anything with the FRGs.”

The family avoided other ceremonies because Peace was “worried my kids are going to call me ‘mom’ and then that’ll create a disruption.”

“The military isn’t just a job, it’s a family,” she said. “So all of a sudden you’re having to hide who you are from all your coworkers and your command, you may not even be able to comfortably live on the military installation.”

Peace said that after the ban was lifted in 2016, she was more open and friendly with her command and her colleagues, as she was finally able to wear her hair longer, seek treatment and fully integrate her family into her military life. She worries a new ban will take all that away.

“That inherently feels un-American to discriminate against people based on anything other than their performance and their potential at their jobs,” she said.