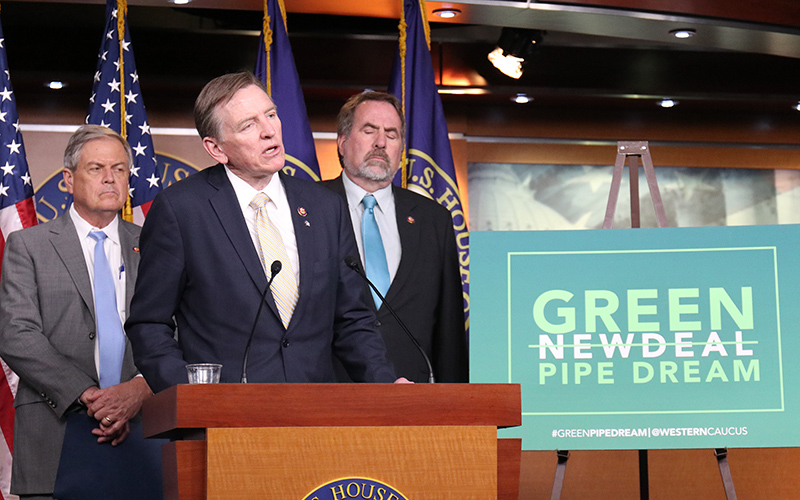 Rep. Paul Gosar, R-Prescott, led the Western Caucus in its criticism of the proposed Green New Deal, a Democrat-backed plan that the GOP members of the caucus said will be a job killer. (Photo by Andrew Howard/Cronkite News) 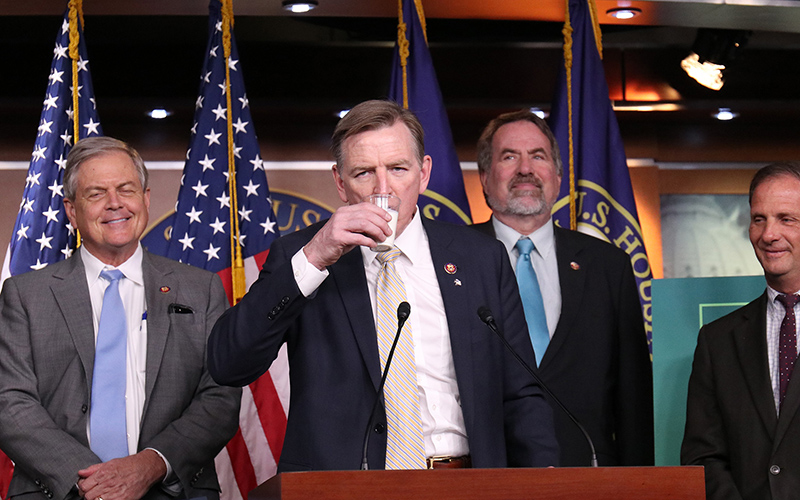 Rep. Paul Gosar, R-Prescott, drinks a glass of milk to make a point at a Western Caucus event on the Green New Deal. Caucus members claim the bill would harm dairy and other agricultural industries. (Photo by Andrew Howard/Cronkite News)

WASHINGTON – The “Green New Deal” faced its first test vote in the Senate Tuesday and a renewed round of criticism from Republicans, who called the expansive environmental bill a “Soviet-style takeover” of the economy.

That was the description used by Rep. Paul Gosar, R-Prescott, during a Western Caucus news conference where lawmakers said the bill would be a job killer.

Those politics were on display in the Senate, where Majority Leader Mitch McConnell fast-tracked a procedural vote on the bill Tuesday so the “American people will have the opportunity to learn precisely where each one of their senators stand,” he said in a tweet.

That plan was sidetracked when the majority of Democrats voted “present,” leading to a 57-0 vote that left the bill hanging. Sen. Kyrsten Sinema, D-Arizona, was one of just three Democrats to join all Republicans in the chamber voting no.

Sinema later issued a statement saying she voted no because we need “to address a changing climate with realistic, achievable solutions.”

The 14-page bill lists ambitious goals, but has few details on how to get there.

But it’s more than just an environmental list, also calling on the U.S. to provide “all people” with access to health care, housing and higher education, among other benefits.

The fact that the bill is more of an aspirational than a judicial document should actually work in its favor, said Heather Ross, a clinical assistant professor at the Arizona State University School for the Future of Innovation in Society.

Ross said “everyone gets their panties in a twist” about resolutions, but that if this bill is looked at as an idea instead of a law it becomes “incredibly beneficial for America’s future.”

“In terms of infrastructure implications, the move towards renewable sources of energy and away from fossil fuels is something we’ve seen are job creators,” she said.

Ross said the idea of the Green New Deal would help foster “long-term sustainable growth” for America by increasing renewable energy sources that would also boost the economy.

But Gosar disagrees. He called the deal “a death sentence for the American dream,” and said that implementing it would “radically transform America into a country that would be very bleak and unrecognizable from the country we know and love today.”

“They are playing gimmicky games again by voting present,” Gosar said. “They ought to stand up, they believe in this, they’ve endorsed it, they ought to vote for cloture and stand up for what they actually support.”

Sinema said after the Senate vote that lawmakers “should stop the political games and work together on practical solutions that foster a healthy environment, grow our economy, and help Arizona families get ahead.” Her office noted that she is co-sponsor of a separate resolution calling for action on climate change.

But her no vote Tuesday on the Green New Deal drew sharp criticism from the Tucson-based Center for Biological Diversity.

“Crippling droughts, wildfires and the drying of the Colorado River are Arizona’s future if we don’t take truly bold action on climate change,” said a statement from Brett Hartl, the center’s government affairs director. “It’s shameful that Senator Sinema voted with Senator (Martha) McSally and all other Republicans who want to stick their heads in the sand and protect fossil fuel interests.”

Gallego said he supports the concept of the bill, but is not one of the 91 co-sponsors on the House version because he wants to see a more detailed bill.

“I like the idea, to be clear I do think this is an existential problem to our world,” Gallego said. “I want to make sure that what we’re going to do is actually going to be effective, as well as make sure we can pass it.”

More important than congressional support is the broad public support he said the bill enjoys.