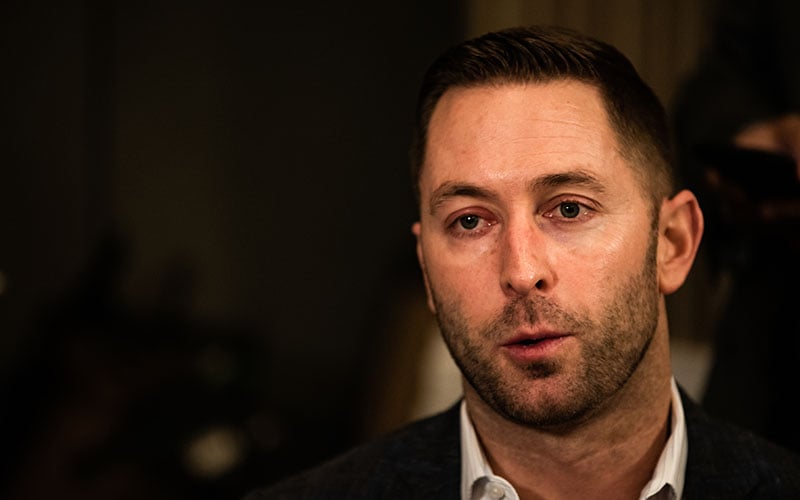 New Arizona Cardinals coach Kliff Kingsbury answers questions during the NFL owners meetings about the team’s plans during the draft. He would not clarify the Cardinals’ stance on quarterback Josh Rosen. (Photo by Tyler Rittenhouse/Cronkite News)

PHOENIX – Arizona Cardinals coach Kliff Kingsbury is still adapting to life as an NFL coach. One of his many responsibilities is speaking to the media.

About 45 minutes into his availability Tuesday at the NFL’s annual owners meeting, he was surprised to still be receiving questions at what he called his longest press conference ever.

“Keep waiting on you all to head out,” Kingsbury said. “But you’re sticking around for a while.”

Inquiring minds wanted to know: Will the Cardinals take a quarterback with the No. 1 pick and ship Josh Rosen elsewhere?

“We’re still in the information-gathering process, if you will. Coaches and scouts have been all over the country, taking in private workouts, pro days and doing those things,” Kingsbury said. “I’m not sure when that decision is going to get made. It’s my first time through it, but there’s a lot to talk about.”

Kingsbury and the other 31 NFL head coaches met with media at the Arizona Biltmore’s three-day event.

The talk throughout the offseason surrounding the Cardinals has been what they’re going to do with the No. 1 overall pick in April’s NFL Draft and Tuesday was more of the same.

Many draft experts are saying the Cardinals will select Oklahoma quarterback Kyler Murray leading those to speculate about the future of Rosen.

This all was sparked by an interview Kingsbury did while he was the head coach at Texas Tech when he said he would take Murray first overall. He never imagined those comments would continue to follow him.

“I was just speaking how I feel about him as a player and how I felt,” Kingsbury said. “I was definitely ahead of the curve on his quarterback playing ability. I’ve watched him for a long time and I knew how special of a talent he was.”

Kingsbury believes there’s a false narrative of Rosen being unable to play in his system, stating that his offensive system is not a “one size fits all.”

“People have said a lot of things that are misconceptions if you will, but Josh (Rosen) is a tremendous player,” Kingsbury said. “I always thought watching him at UCLA he played his best football in a spread system that had some similarities to what we do.

“He’s a tremendous thinker, very cerebral and can throw it with anybody. We take a lot of pride in building a system around a quarterback so for someone to say he doesn’t fit in our system, it doesn’t make sense.”

Kingsbury said the Cardinals are not any closer on locking down a decision for who they will select first overall, but the team will be meeting next week to begin discussions.

Kingsbury stressed the importance of going through the process.

“You just want to make sure you’re thorough when you have the No. 1 pick. That’s a pick that can change your organization for many years to come so if you’re not doing all your due diligence possible, then I think it’s a mistake,” Kingsbury said. “It’s been a very extensive process with the (NFL Scouting) Combine and going out to see all these people and I feel we’re doing a good job of gathering information.”

For Kingsbury and the Cardinals, it’s all about ignoring the noise of mock drafts and staying focused on the task at hand.

“It’s really on Steve (Keim), our general manager, and (owner) Michael Bidwill and just making sure that we are focused on the right things and that’s getting the best player that fits the Arizona Cardinals whoever that may be,” Kingsbury said. “That’s been our goal and we will continue to be thorough in our process and try to get that right.” 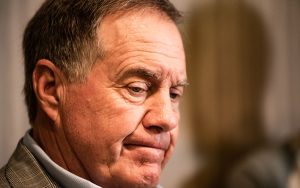 The NFL owners meetings have allowed Cardinals coach Kliff Kingsbury to reconnect with coach Bill Belichick of the New England Patriots, who drafted Kingsbury in 2003. (Photo by Tyler Rittenhouse/Cronkite News)

The first-time NFL head coach was able to connect with other head coaches from around the league.

“I’ve met a lot of new people involved with the league,” Kingsbury said. “I had a chance to bounce a lot of ideas off of current head coaches, which has been great. It’s been a very fulfilling week so far.”

One of those head coaches he caught up with was New England coach Bill Belichick, someone Kingsbury spent time with in 2003. The Patriots drafted Kingsbury that year.

“I got to talk to Bill. I’m sure he will be fired up for this today,” Kingsbury said. “He’s doing good and it’s awesome that he’s still going strong and when he speaks up in these meetings, everyone perks up and listens.”

It’s been a whirlwind three months for Kingsbury putting a coaching staff and playing system in place before the start of offseason workouts April 8.

“I think a lot of my time right now is devoted to getting our offense into a coachable form, putting it altogether with the different run game that we’ve acquired, the new terminology and scripting for organized team activities and practices,” Kingsbury said. “Along with that, there’s all the prospect evaluation whether it’ll be free agents or college prospects. When you get through that, that’s a full day.”

A stark contrast for Kingsbury in his move from the collegiate level to the professional level is interactions with coaches and their willingness to discuss ideas.

“I think there’s a solidarity amongst head coaches understanding just what goes into this, the pressures of the league,” Kingsbury said. “It’s more about the overall brand of the NFL than guys trying to protect any secrets.”

It’s a much different environment for head coaches at the collegiate level.

“In college football, you’re competing against that guy every single day for recruits so there’s not a lot of give-and-take,” Kingsbury said. “It’s been really fun to get to know these guys (NFL head coaches) and see how much help they’ve been to me.”

He didn’t say if that help included advice on what to do with a No. 1 pick.