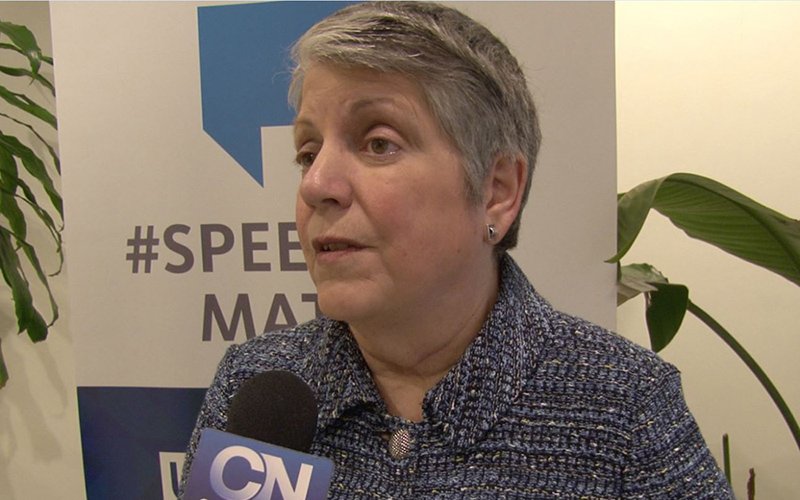 Former Arizona Gov. Janet Napolitano, now the president of the University of California System, said a Trump administration plan to withhold funding from colleges unnecessarily “injects the government” into the business of moderating free speech. (Photo by Luv Junious/Cronkite News) 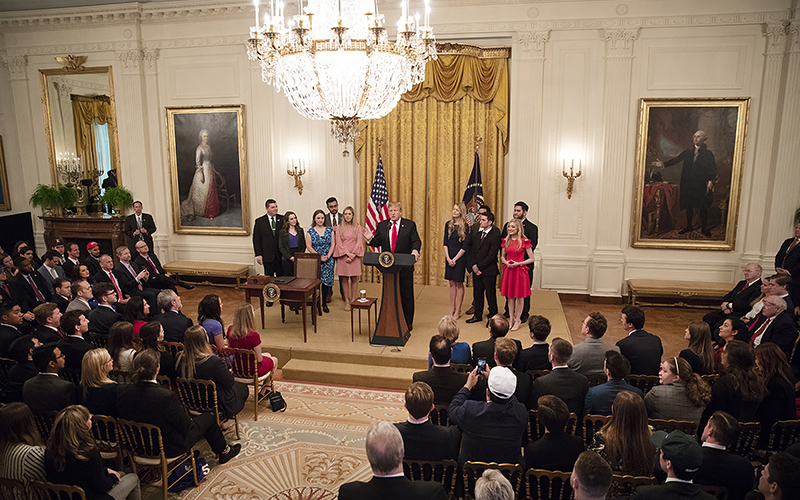 President Donald Trump in the East Room of the White House, surrounded by students who he said have had their free-speech rights muzzled on their campuses, shortly before he signed an executive order on the issue. (Photo by Joyce N. Boghosian/White House)

WASHINGTON – Former Arizona Gov. Janet Napolitano said Thursday that a Trump administration policy that threatens to strip funding from colleges in the name of free speech is “unnecessary and, in some respects, undesirable.”

Napolitano, now president of the University of California System, made the comments after a forum just blocks from the White House where President Donald Trump signed an executive order for “improving free inquiry, transparency and accountability” on campuses.

“It’s unnecessary because we don’t need a government order to say there needs to be free speech on college campuses,” Napolitano said after the event hosted by the UC National Center for Free Speech. “It injects the government and its regulatory framework right into the heart of higher education.”

But Trump, surrounded by conservative college students who said their voices have been squelched by campus administrators, said the order is long overdue.

“Under the guise of ‘speech codes’ and ‘safe spaces’ and ‘trigger warnings,’ these universities have tried to restrict free thought, impose total conformity and shut down the voices of great young Americans like those here today,” he said before the East Room signing ceremony.

“We must encourage institutions to appropriately account for this bedrock principle in their administration of student life and to avoid creating environments that stifle competing perspectives, thereby potentially impeding beneficial research and undermining learning,” the order said.

But it was thin on details, except to say that free speech policies would have to comply with existing laws and regulations. While it was highlighted, the free speech language was just one part of a six-part policy that was mostly dedicated to improving reporting of educational outcomes and clarifying the student loan process. 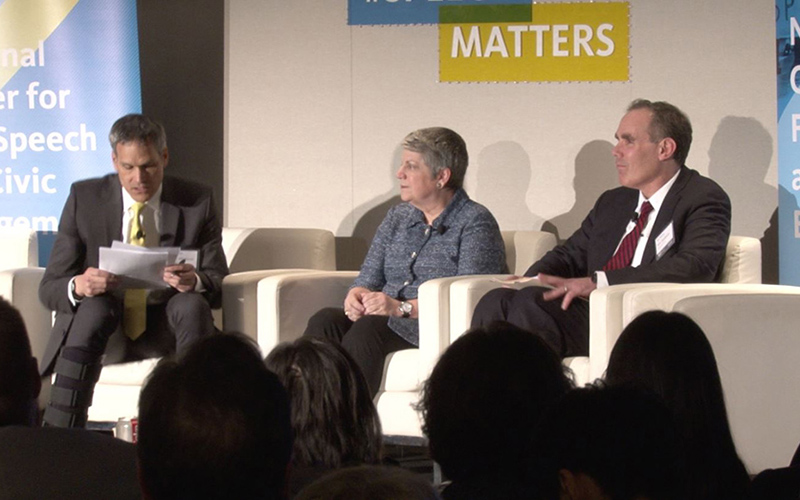 Napolitano agrees with the goal. As president of the UC System, she dealt with the aftermath of a 2017 protest at University of California, Berkeley, when protests at the liberal campus caused $100,000 in damages in response to a planned speech by a conservative activist.

She said free-speech rights are “particularly important for college campuses like Arizona State, like the U of A, like NAU, where you have students of broadly different backgrounds, different viewpoints, speakers of all stripes coming in.”

Students like Judah Waxelbaum, chairman of the Arizona Federation of College Republicans and a sophomore at ASU majoring in political science. Waxelbaum said the conservative opinions that got him into trouble with high school teachers continued to be an issue when he got to campus.

“We’ve dealt with issues with trying to table at the MU,” he said, referring to a popular gathering place at ASU’s main campus. “And always dealing with the idea in the back of our heads that expressing republican ideas could get us in trouble with faculty.”

Waxelbaum, whose group promotes conservative activities on all the state’s university campuses, said he’s not alone – other students in the group often worry about turning in papers that support conservative ideas, or sparring with professors who talk about Trump in their classes,

Jacqueline Pfeffer Merrill from the Bipartisan Policy Center said that intolerance could stem from a lack of intellectual diversity among the professors.

“I think it’s fair to say college faculties lean left,” she said. “What is missing from the college campus is the example of those who state arguments and actually believe them in earnest.”

“I think if we don’t have scholarly, academic, thoughtful, conservative faculty on campus then more students are tempted to invite provocateurs that cause these campus upsets,” Merrill said.

Like Napolitano, Waxelbaum said he supports the sentiment behind the executive order, but worries about the government auditing free speech on campuses.

“I’m always worried of anyone being the arbiter, whether it’s Twitter deciding what should be on the platform or whether the government gets to decide what free speech looks like,” he said.

“But I don’t think that’s a lot to be asking for that if you’re a taxpayer-funded institute, you should be following the law,” Waxelbaum said.