“It’s a one-and-done,” the Arizona State senior forward said. “It’s one and my college career is over.”

The ASU women’s basketball team is heading east for the NCAA Tournament to face the Central Florida Knights Friday in Coral Gables, Florida.

The Sun Devils are coming off a 20-10 season finishing fifth in arguably the toughest conference in women’s basketball, the Pac-12.

Arizona State is making a school-record sixth straight NCAA Tournament appearance but hasn’t moved past the second round since 2015 when it made the Sweet 16.

The team will look to break through in the seniors’ last run through the Big Dance.

“They’re experienced, first and foremost,” coach Charli Turner Thorne said about her team. “They’ve played the best teams in the country, toe to toe going down to the last possession. I know they are confident, and they believe they can win.”

The Sun Devils played one of the toughest schedules in the nation with nine games against Top 10 opponents this season. 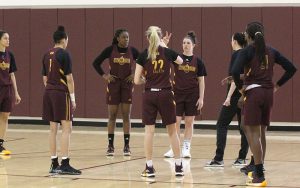 Arizona State played one of the toughest schedules in the nation. (Photo by Sam Ficarro/Cronkite News)

“This team knows it’s not about the opponent. When we’ve come up short, we know it’s because we haven’t done certain things that we need to do,” Turner Thorne said. “It wasn’t like, ‘Oh, we couldn’t match up with this team.’ We haven’t seen that against the best competition in the country. This team knows that if they do what they need to do, they’ll win.”

After not graduating any players from last season’s squad, the senior quartet of center Charnea Johnson-Chapman and forwards Ibis, Sophia Elenga and Courtney Ekmark will look to breakthrough past the tournament’s first weekend.

Ibis and the seniors are bringing a sense of urgency to the team.

“It would be really awesome for us to get to at least the Sweet 16,” Ibis said. “For us, we’ve never experienced it so we’re really aiming for that.”

For Johnson-Chapman, there’s motivation to get past the first weekend of the tournament.

“We really believe this team is special, and we’re never going to be together again so why not do it now,” Johnson-Chapman said. “We have the key components, we have the talent, we have the people who want to work hard so we’re just trying to get out there and do it together.”