Claudia Faudoa, a Phoenix mother with the group EcoMadres, testifies against a proposal to relax mercury-emission standards during an Environmental Protection Agency hearing in Washington. (Photo by Andrew Howard/Cronkite News) 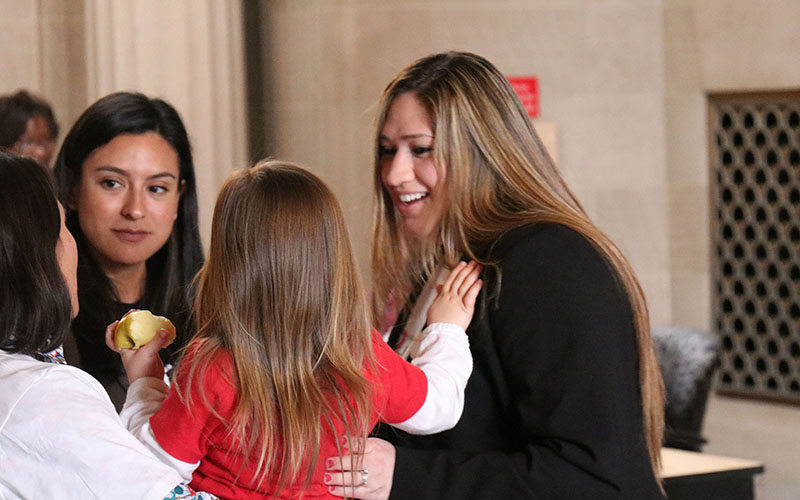 Gabriela Rivera, right, said she hopes that testimony about the proposed rule change from “a lot of moms” about “a lot of children’s lives that are going to be affected” will sway EPA administrators. (Photo by Andrew Howard/Cronkite News)

“I’ve traveled all the way from Arizona this morning to tell you that my children are the most precious resource I have,” Faudoa said at a public hearing on the proposed changes. “And that is why we must ensure that the mercury standards are not undermined, weakened or reduced in any way.”

But the EPA said that it needs to revise its 2016 Mercury and Air Toxics Standards (MATS) after a new analysis showed the costs of implementing the standards “grossly outweigh” its benefits. The agency said the current rules could cost oil- and coal-fired power plants as much as $9.6 billion to implement while producing no more than $6 million a year in benefits.

A spokeswoman for Arizona Public Service said Monday that APS does not typically comment on regulatory changes, but she said the utility will comply with whatever rules are announced.

But one energy company executive at the EPA hearing welcomed the proposed changes, although he said they do not go far enough.

“We commend EPA for acknowledging that MATS’ massive costs far exceed the benefits that would be produced by its small, incremental reduction in mercury emissions,” said Cody Nett, assistant general counsel for Murray Energy Corp. in comments at the hearing.

But Nett said the company is “extremely disappointed” that the MATS rule was not rescinded entirely.

“Leaving MATS in place would be just as great an affront to the rule of law – if not greater – than the fuzzy math and baseless hand-waving deployed by the Obama administration to impose the rule in the first place,” he said in his prepared remarks.

The EPA in early February posted notice of the proposed changes to the rule, which would end regulations for hazardous air pollutant emissions, like mercury, from coal and oil power plants. The agency said that when the limits were last refined, the cost for companies to implement them was not considered. With that in mind, the agency said, it is no longer “appropriate and necessary” to regulate hazardous air pollutant emissions from power plants.

But environmental groups fear the changes may result in more mercury pollution, which can be harmful to people and the environment.

Gabriela Rivera is regional field manager for EcoMadres, a collaborative between Moms Clean Air Force and Green Latinos. She said the organizations hope the comments from her group and others will persuade the EPA that it should not relax the mercury standards.

Faudoa, who is a member of EcoMadres, said “failing to take action comes at a serious health and financial cost for Latinos and all Americans.”

“I know Latinos and low-income communities live closer to the most pollution … and this proposal will affect them more,” she said. “It will allow more pollution when we need less. That is unacceptable, it is not right.”