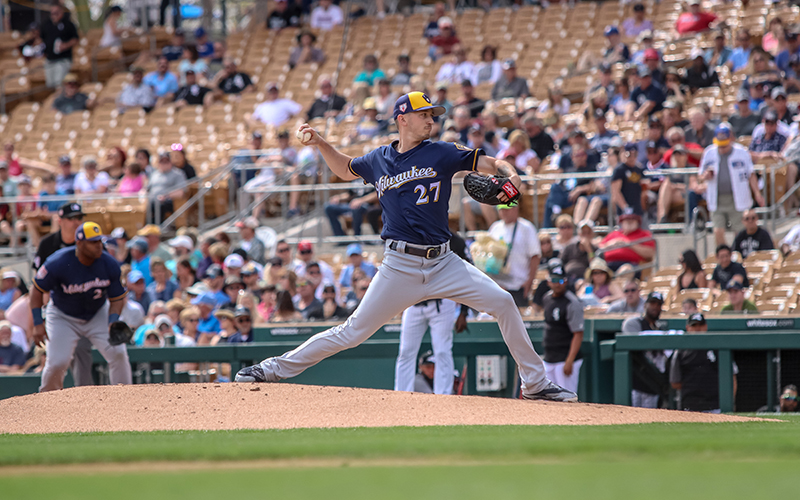 Zach Davies, Milwaukee Brewers pitcher, is just one of the many MLB players that will have to adapt to changes to league rules, including the minimum batter rule for the number of batters a pitcher must face. (Photo by John Mendoza/Cronkite News)

PHOENIX – With less than two weeks remaining in spring training, managers are whittling down rosters and seeing a much clearer picture of what lies ahead in the regular season.

What isn’t as clear is how a batch of rule changes Major League Baseball unveiled Thursday will impact the game. Some of the rules will be in effect on Opening Day. Even more are coming in 2020.

It is designed to avoid late-season salary dumps and will eliminate a deal like the one the Houston Astros made on the last day of August in 2017 to acquire pitcher Justin Verlander from the Tigers. The addition of Verlander helped propel the Astros to their first World Series title.

Also this season, breaks between innings will be shorted from 2 minutes, 5 seconds to 2 minutes for locally televised games. The break will be trimmed 25 seconds to 2 minutes in nationally broadcast games. Commercial breaks had been trimmed from 2:25 to 2:05 and 2:45 to 2:25, respectively, last season.

And mound visits, which had been limited to six last season – including those by managers and coaches, or by players leaving their position to confer with a pitcher – now are limited to five.

According to Baseball Reference, the average nine-inning MLB game in 2018 lasted exactly three hours, a drop of only five minutes from 2017 – even with reductions in mound visits and time between innings last season.

Changes coming in in 2020 include a change in the All-Star Game voting setup, which will add a sort of runoff vote between the top three vote-getters after a first round of fan balloting, and a reduction of 40-man rosters in September to 28.

Another pace-of-play rule is coming next season that might prove to be the most controversial change.

Beginning in 2020, if a pitcher enters a game, he must face at least three batters before a manager can remove him – barring an injury or reaching the end of the inning. The idea is to avoid several situational pitching changes in an inning, speeding up play.

“It certainly makes that lefty specialist less attractive,” said Dodgers manager Dave Roberts, who broke the record last season for most pitching changes in a season. Roberts will have to change his strategy in 2020, but he said he’ll adjust.

“Under the construct of the rules, we abided using our roster, and that’s the point of it,” he said. “As they evolve, we evolve.”

Across the Cactus League, managers are digesting the rule changes with some, like Roberts, only commenting after reporters clued them in on the announced changes.

“Baseball has been fairly traditional for many, many years,” he said. “But there’s a group of people that pay a lot of attention to the current status of this game, and they’re trying to make it greater.”

Diamondbacks manager Torey Lovullo supports anything that will improve the game. He said the addition of instant replay in 2014 was “a shock to the system” but players, managers and umpires adjusted, and now it is a routine part of the game.

Lovullo sees the new changes in a similar light and said he is “all for that” if changes improve the fan experience.

“Sometimes it’s a little adjustment, but there’s some new normals in this game, such as the mound visits,” Lovullo said. “It was a little different last year, but we adjusted to it.”

One change that was not included is the addition of a pitch clock, which baseball has been experimenting with in the Arizona Fall League and during spring training.

However, commissioner Rob Manfred said the clock is coming to the majors soon.