Dreamers like Jessica Garcia, at podium, joined Democratic House members at the unveiling of a bill that would create a pathway to citizenship for DACA recipients like her. (Phooto by Alyssa Klink/Cronkite News) 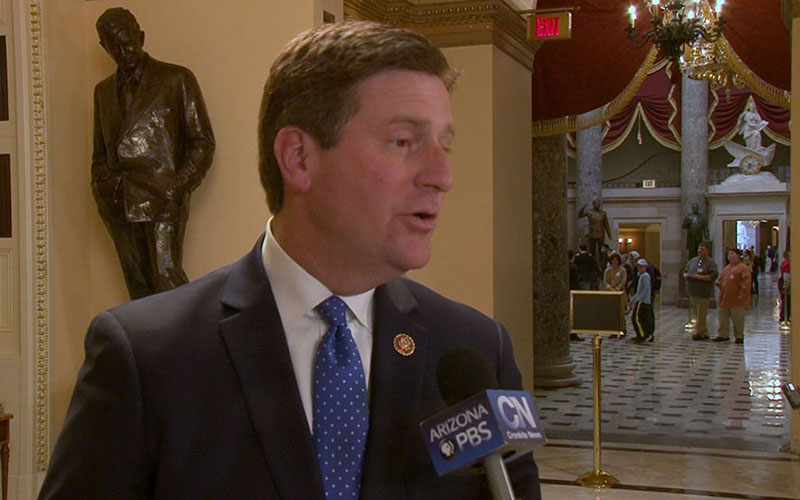 Rep. Greg Stanton, D-Phoenix, was one of more than 200 House members signed on to the Dream and Promise Act. saying it would benefit the economy by bringing immigrants out of the shadows. (Photo by Alyssa Klink/Cronkite News)

WASHINGTON – House Democrats unveiled legislation Tuesday that would provide a pathway to citizenship for an estimated 2 million immigrants protected under the Deferred Action on Childhood Arrivals, Temporary Protected Status and other programs.

Sponsors said the bill, which has not yet been formally introduced, will also give Dreamers access to federal financial aid and professional and business licenses. TPS and DED recipients would have their protection from deportation renewed under the bill, which would make it harder for the administration to cancel their protected status.

Rep. Greg Stanton, D-Phoenix, said the bill would benefit not just the immigrants involved but the economy as a whole, through a better-educated and more competitive workforce.

“Taking them out of the shadows and putting them fully in our economy, giving them full education opportunities, particularly in-state tuition,” Stanton said of the Dreamers who would be affected.

“We want them to take their rightful leadership place, but they can’t afford to go to higher education,” he said. “That’s self-defeating public policy.”

The bill comes in the wake of President Donald Trump’s efforts to reverse protections for immigrants covered by DACA, TPS and DED.

Trump last year revoked protection for 4,000 Liberians covered by DED, a special program that allows the president to block the removal of specific groups. They are scheduled to be returned at the end of this month.

Trump’s efforts to end TPS protection – granted to people who cannot return to their home countries because of natural disasters or political strife – have been pushed off until 202 by Homeland Security officials.

And the president’s efforts to reverse the DACA program started by President Barack Obama have been blocked in court. That program defers deportation for immiigrants who were brought here illegally as children but who have clean records and are in school, a job or the military.

Sponsors of the Dream and Promise Act claimed Tuesday that they already have more than 200 co-sponsors, but they would not say how many are Democrats and how many, if any, are Republicans. But conservatives were already criticizing at the bill.

“Essentially this is being put forward as kind of an ethical obligation we have to people whose parents brought them here,” said Ira Mehlman, a spokesman for the Federation for American Immigration Reform, which advocates for lower immigration. “And the predictable response to that will be that a lot more people are going to start bringing their kids – more than they already are – bringing them to the United States in the expectation that they will eventually give the same reward.”

Mehlman rejected the argument that there would be an economic benefit to the bill. If that was the goal, he said, Democrats should have accepted “the president’s challenge to come up with a merit-based immigration policy,” pointing to a 2017 bill that would have cut programs like the diversity visa lottery in favor of a strict merit-based system.

But Jose Magaña-Salgado said Democrats need to stress the economic benefits of the bill and its long-term investment to education if they want it to pass.

“The fact of the matter is, is that an individual … who obtains a higher education will have a greater income than someone that doesn’t,” said Magaña-Salgado, the director of policy and communications at the Presidents’ Alliance on Higher Education and Immigration. “They have a greater share of their income that they can spend on local businesses, local services.”

Magaña-Salgado was a student at Arizona State University in 2006 when he lost his in-state tuition because of Proposition 300. The voter-approved state law inspired by the 1996 federal Illegal Immigration Reform and Immigrant Responsibility Act, which said people not “lawfully present” in the country could not obtain public benefits.

Magaña-Salgado relied on nonprofits to continue to fund his education until he graduated in 2008. But he said it’s time to pass the Dream and Promise Act, part of which would reverse the Illegal Immigration Reform and Immigrant Responsibility Act.

“Failing to provide a roadmap to citizenship would mean those economic gains would be lost,” Magaña-Salgado said.

The bill is expected to pass the Democrat-controlled House but it is unlikely to pass the Senate in its current form and even less likely to be signed by the president. But Stanton hopes to pass the act as true to its original form as possible.

“I know some people are trying to use Dreamers as pawns to accomplish other policy goals. I don’t think that’s the right approach,” Stanton said. “I think we ought to deal with it as a so-called clean Dream Act … if done that way I believe it will get strong bipartisan support.”