Tempe City Council member Robin Arredondo-Savage, with microphone, joined city officials from Ohio, Missouri and Texas on a panel to talk about the impact a proposed change to immigrant benefits could have on their cities. (Photo by Micah Alise Bledsoe/Cronkite News) 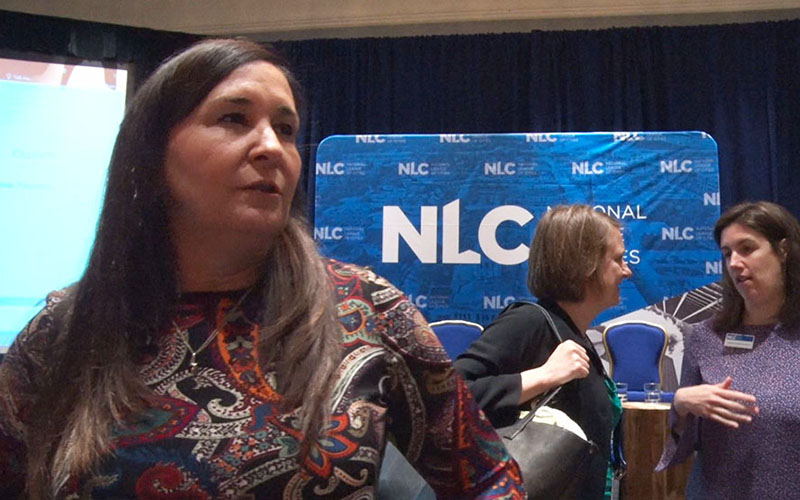 WASHINGTON – A Trump administration plan to limit public assistance for legal immigrants simply “passes the buck down to cities who are going to have to figure out how to pay” for the lost benefits, local officials were told Monday.

At a National League of Cities conference, a panel of officials from around the country looked at a Department of Homeland Security plan to limit the benefits legal immigrants could receive before becoming a “public charge” – thus endangering their chances of citizenship.

Benefits targeted under the proposal include food stamps, Medicaid and Medicare, housing subsidies and the Children’s Health Insurance Program, among others. But city officials worry that the impact could be felt far beyond recipients of those benefits.

“It’s important to put it on your radar and to really know what those impacts can be,” said Tempe City Council member Robin Arredondo-Savage after the event. “Because it’s obviously something that’s going to be very negative for a lot of people.”

Currently, the Immigration and Nationality Act states that, “Aliens who seek adjustment of status or a visa, or who are applicants for admission, must establish that they are not likely at any time to become a public charge.” The law defines public charge as someone “likely to become primarily dependent on the government for subsistence.”

But Homeland Security in October proposed changing that definition to include immigrants receiving “one or more” of a number of public benefits. A final rule will not be published until after the department can review the more than 266,000 public comments that were posted in response to the proposal.

Jackie Vimo, policy analyst for the National Immigration Law Center, said the changes are sure to put the burden on cities.

“It passes the buck down to cities who are going to have to figure out how to pay for that,” Vimo said of the benefits that immigrants are likely to forgo.

Branson, Missouri, Mayor Karen Best said that not all the weight will fall on cities. In her town, she said, residents have started turning to nonprofit and faith-based groups for services because of the proposed changes.

“They are not going to government agencies,” Best said. “But nonprofits have stepped up to fill the gap.”

Arredondo-Savage said local officials will also have to deal with a loss of trust from immigrants living in their cities.

“People were feeling afraid.” she said, referring to other Trump administration immigration policies. “They didn’t feel like they could trust us or their law enforcement.”

San Antonio City Council member Rebecca Viagran said there are many policies that are plaguing the Latino community in her city, including family separation and the unknown future of the Deferred Action for Childhood Arrivals program. It doesn’t help, she said, that some of her constituents have given up benefits so a family member’s citizenship application is not put at risk.

While they worried about the public charge change, the panelists also took a step back and looked at the larger question of immigration reform. They called for protection for DACA and Temporary Protected Status recipients, as well as an immigration plan with a clear path to citizenship.

They also spoke about the specific issues affecting their cities.

Best said Branson, with its many vacation and entertainment venues, relies on an influx of immigrant workers to fill jobs, but new restrictions on summer visas for students and on temporary worker visas have left the city with jobs it cannot fill. Viagran said that, with San Antonio near two facilities that house separated families, many immigrants in her town are scared.

Athens, Ohio, Mayor Steve Patterson said Ohio University has seen a drop in international student enrollment because of administration policies, like the travel ban. That has had negative effects on the city as a whole, he said.

Arredondo-Savage said Tempe is working to make immigrants to feel welcome by hiring a diversity officer, as well as passing an anti-discrimination ordinance.

“What we’ve heard from all the panelists in unison is how important it is for a community to be proactive,” she said. “To really make sure that you’re creating that culture of inclusivity and welcomeness to everybody that’s in your community.”