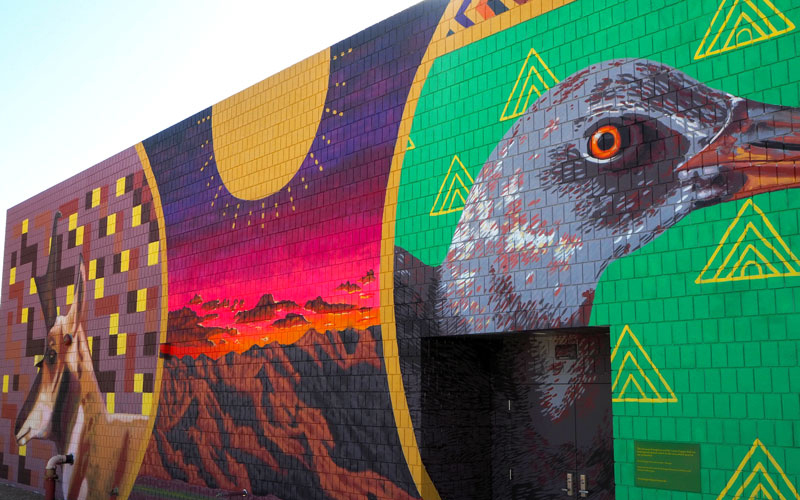 This 76-foot by 22-foot mural at Arizona Western College in Yuma is the 20th in a series commissioned by the Center for Biological Diversity. Both species are endangered. (Photo by Oskar Agredano/Cronkite News)

YUMA – The fastest land mammal in North America and a large-footed marsh bird in the Southwest have been listed as endangered for more than half a century. The Sonoran pronghorn and the Yuma Ridgway’s rail are featured in a vibrant new mural at the Arizona Western College theater that’s meant to show how climate change and human activity are serious threats to these animals.

The Sonoran pronghorn’s range is bounded by Interstates 10 and 19, the Colorado River and the border with Mexico. The Yuma ridgway’s rail, formerly known as the Yuma clapper rail, makes its home in the wetlands and flatlands ranging from the Colorado River Delta in Mexico up the Colorado River to southern Nevada. There are more rail populations along the Gila River into Phoenix, and by the shrinking Salton Sea in California.

“They sort of represent a lot of what the Yuma ecology is really defined by: the meeting of the rivers and the broad, open desert; that’s kind of austere,” said artist Roger Peet, who’s coordinating the Endangered Species Mural Project in association with the Center for Biological Diversity in Tucson.

The mural is meant to bring awareness to how change in the environment threatens the survival of these species, which were listed as endangered in 1967. Drought caused by overextraction and misuse of water threaten the rail’s marshy habitat, while the pronghorns are affected by Border Patrol activity along the U.S.-Mexico border. 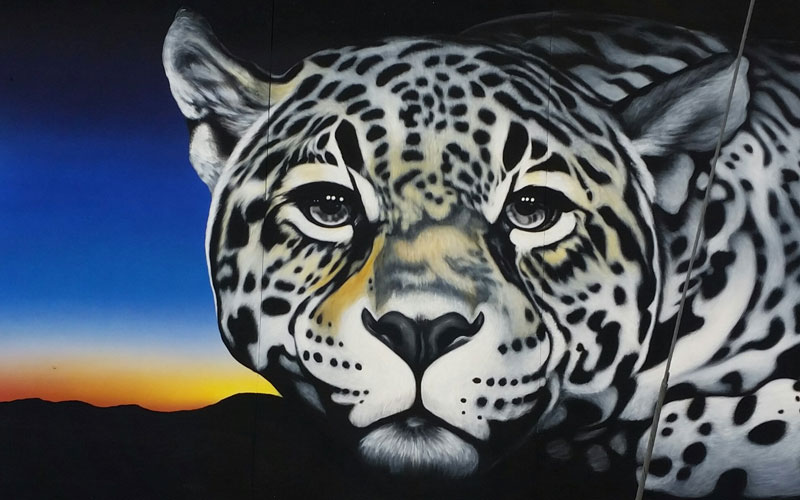 Tucson artist Kati Astraeir created this jaguar mural on a wall of Borderlands Brewery in Tucson. (Photo by Russ McSpadden/Center for Biological Diversity)

“Studies show that the pronghorn were being disturbed an average of once every four hours by Border Patrol helicopters, by Border Patrol SUVs, and I mean, imagine being one of only 19 animals left,” said Laiken Jordahl, who works on borderlands issues for the Center for Biological Diversity. “You have to repopulate your entire species or face extinction and you’re being disturbed every four hours.”

Peet, who lives in Portland, Ore., has painted many murals around the country featuring endangered animals. He usually partners with a local artist in each location.

This time, he partnered with Lucinda Hinojos of Phoenix, who’s widely known as La Morena. She traditionally paints immigration murals, and this was her first environmental piece.

The Endangered Mural Project has 20 murals in multiple cities, including sockeye salmon in Portland, a blue whale in Los Angeles and a jaguar in Tucson.