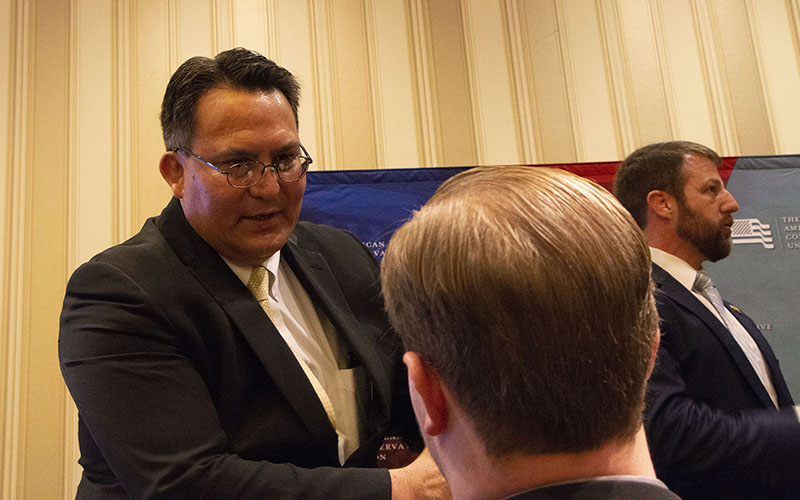 Dwight Witherspoon, a member of the Navajo Nation, told an audience at the Conservative Political Action Conference that conservatives and Native Americans have similar values. (Photo by Keerthi Vedantam/Cronkite News) 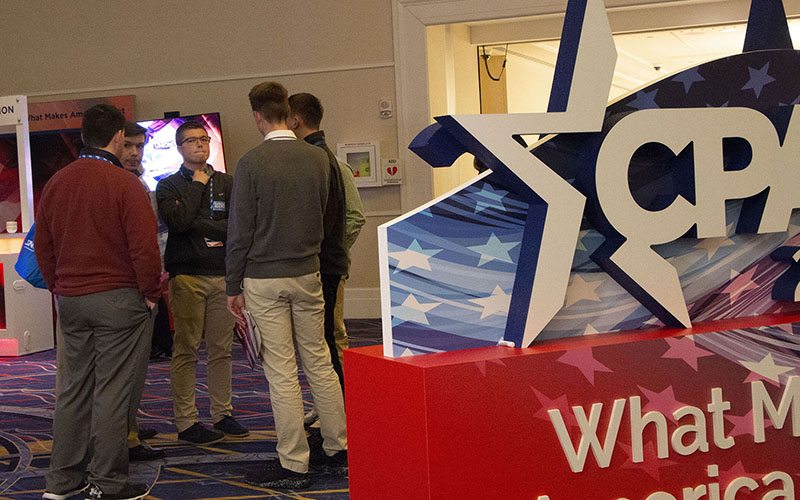 Participants gather in a hallway at the Conservative Political Action Conference, or CPAC, which annually draws top conservative speakers – and this year drew some tribal leaders. (Photo by Keerthi Vedantam/Cronkite News)

WASHINGTON – The audience at the Conservative Political Action Conference had heard the message of low taxes and local control from speakers before.

But they had never heard it from one group of speakers who showed up Thursday to the annual gathering: Native Americans who called for less government oversight on reservations and greater tribal sovereignty.

He and others said that’s because excessive government bureaucracy in Indian Country makes it all but impossible for tribes to push infrastructure and economic development projects in light of the “barriers put in place.”

“We can’t achieve that financial freedom because … I have to ask Big Brother for permission,” he said.

Dwight Witherspoon, a legislative assistant to Navajo Council Speaker Seth Damon, said tribes and conservatives have to recognize their “commonality, because it absolutely does exist.”

While that may be, James Adakai said there are other concerns that Native voters need to keep in mind. Adakai, a Navajo who is chairman of the Democratic Party in San Juan County, Utah, points to environmental policy.

“There are a lot of values we share as a Democratic Party with the indigenous communities, starting with protecting lands and protecting the Earth,” said Adakai, who described himself as a lifelong Democrat. “It’s not perfect but it comes close to our beliefs.”

Adakai criticized what he called a Republican approach to the environment that prioritizes oil and gas drilling.

“The land is the way of life to Native American communities and the Republican agenda, when they look at the land, is they want to extract it for mineral development. Whereas from a Native perspective we want to preserve the land,” he said.

In Congress, there’s an even split between Native American members. Democratic Reps. Sharice Davids of Kansas and Deb Haaland of New Mexico made headlines when they became the first Native American women elected to Congress last year. But they joined two Republicans, Mullin and fellow Oklahoma Rep. Tom Cole.

That shouldn’t be surprising, said Brandon Ashley, a Navajo who serves as a senior policy adviser for Sen. John Hoeven, R-North Dakota.

“A lot of this stuff is kind of the basis of what conservatism is all about,” Ashley said of the topics covered Thursday at CPAC. “Being self-reliant … less government regulations.”

Gavin Clarkson, a New Mexico Republican and member of the Choctaw Nation, said tribes face other government challenges, like businesses having to pay both federal and tribal taxes.

“For example, there’s not Walmart on the Navajo Nation,” Clarkson said after the CPAC discussion. “The dual taxation and the oppressive federation regulation makes it impossible to do business on the reservation relative to doing it off the reservation.”

He echoed the panelists who said Native Americans have much to gain from supporting Republican-backed causes and vice versa.

“A lot of people at CPAC don’t fully understand that tribal sovereignty and private property rights are two sides of the same conservative coin,” Clarkson said. “Unfortunately, far too much of Indian Country supports Democrats even though it’s against their sovereign interests.”

“How does Indian Country line up with conservatives? We’re fighting for the same things,” he said.

And Clarkson, who hopes to help flip New Mexico’s 2nd District seat in Congress back to Republican control, said the Native American vote cannot be ignored.