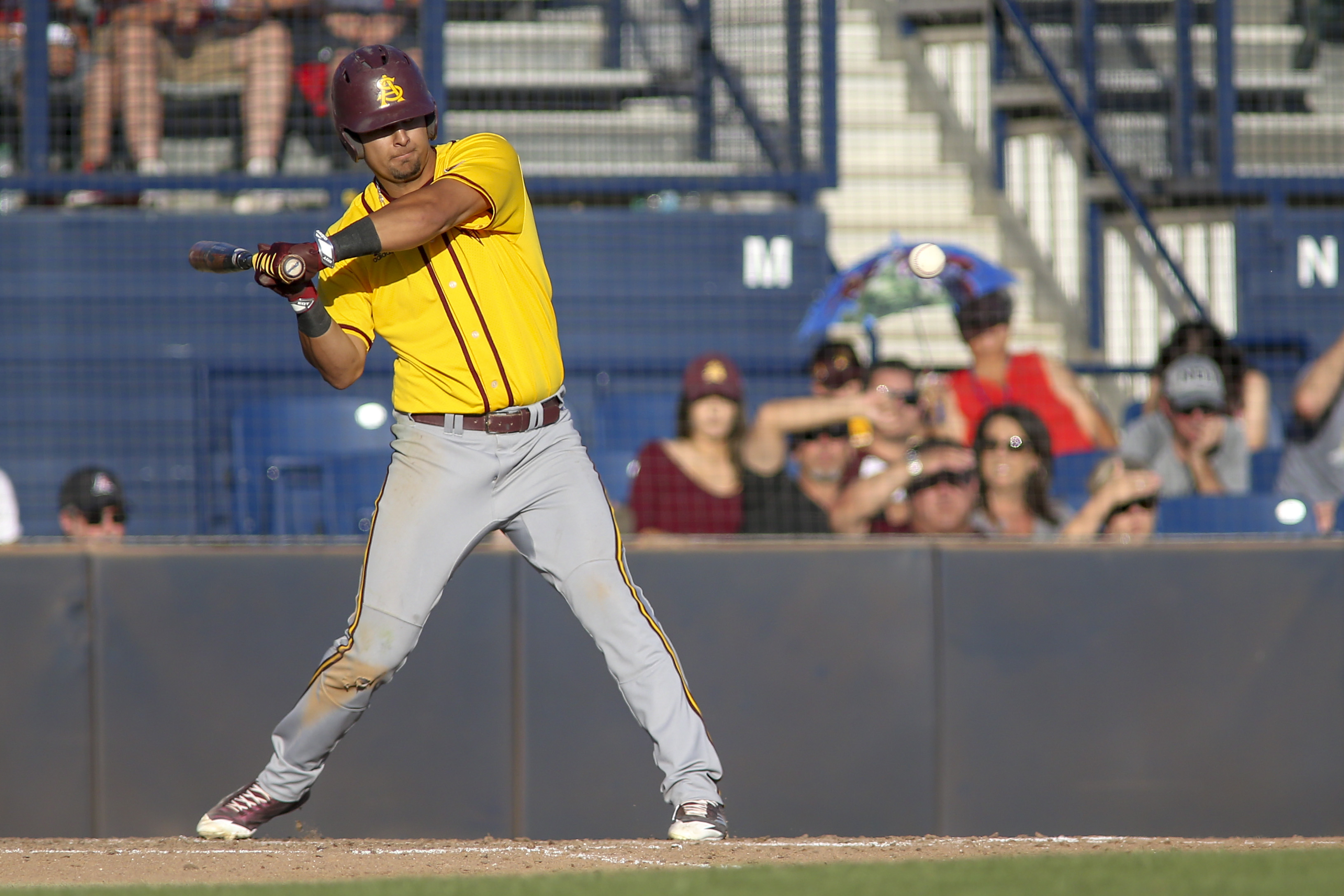 Infielder Carter Aldrete is among the many Arizona State players who have contributed to the team’s 8-0 start. (Photo by Jacob Snow/Icon Sportswire via Getty Images)

TEMPE – After consecutive 23-32 seasons, the worst two-year stretch in program history, Arizona State baseball entered 2019 with the intent of only looking forward.

“We try to eliminate ‘last year’ from our vocabulary,” coach Tracy Smith said.

The club’s focus is fully on this season, one that is off to an 8-0 start. The Sun Devils’ early success earned them a spot for the first time this season in Collegiate Baseball’s Top 30 poll, landing 24th.

Despite having only 27 players on its roster, the fewest on any Pacific-12 Conference team, ASU is led by an experienced group of seven returnees who played in at least 49 games in 2018.

Smith’s mixed success at ASU has attracted critics. Many players have transferred in recent years, including four who left the program last fall, but the coach likes where his team is.

“We have quality depth, we just don’t have a lot,” said Smith, whose teams opens a three-game series against Michigan State Friday at Phoenix Municipal Stadium.

Depth will inevitably come into play during a 56-game season, so it’s hard to draw too many conclusions from the smaller roster’s success over the first eight games.

The lack of numbers in the dugout does not bother junior outfielder Hunter Bishop.

“I love it,” Bishop said. “Less guys to focus on in terms of playing time. I think that allows our starting nine to really lock it in. I believe having a smaller locker room allows us to be tighter.”

Eight of the nine Sun Devils with at least 20 plate appearances are batting .300 or better this season. Four players have more than 10 RBIs.

“We’re not stupid enough to think it’s going to be that easy every single time out,” Smith said after his team’s offensive explosion in a sweep of Notre Dame, “but if you stick with your approach, it’s nice to see the positive results. You want to build off that.”

After dominating sweeps of Notre Dame and UC Davis, as well as wins against San Diego and Pepperdine, the Sun Devils are 8-0 for the first time under Smith. His team was 4-4 through the first eight games last year and 5-3 in 2017.

A turnaround year can benefit from a good start, especially given the step-up in competition that will occur in two weeks when conference play begins.

The Sun Devils have won just 21 of their last 60 games versus Pac-12 opponents, or a .350 winning percentage in a two-year stretch.

This season, ASU is averaging more than 11 runs per game.

“We really made a statement I think, who we can be and who we want to be down the road,” said Bishop, who is batting .379 with two homers and seven RBIs.

Spencer Torkelson, who led the nation in home runs as a freshman in 2018 with 25, poses a major threat batting second, just ahead of Bishop. The tandem has been hard to keep off the base paths. Torkelson has started the season batting .486 with 15 RBIs and a home run.

Both Bishop and Torkelson started the season hot, but hit a speed bump when neither produced a hit in a 4-3 victory over Pepperdine on Tuesday night.

“All that matters to them is that we won,” Smith said. “They’re not worried about an 0-for-4 and an 0-for-3 (effort). Those guys are thrilled to death that we won and it’s genuine. That to me is more important than anything.”

In it for more than just the gaudy numbers, Torkelson and Bishop hope to bring the winning tradition back to a program that has 22 College World Series appearances.

Led by the experience of junior starter Alec Marsh, ASU’s pitching has helped keep early leads secure. Marsh has a 1.23 ERA, and the pitching staff as a whole is giving up an average of just 2.50 earned runs a game. A couple of hard-throwing newcomers, freshman Blake Burzell and freshman Erik Tolman, have already had clutch performances on the mound to keep ASU’s win streak alive.

“I just want us to go 56-0,” Burzell said following his key five-out save against Pepperdine.

“We know we can win a lot of games, and we don’t want to get ahead of ourselves,” Tolman said.