Scott Bordenkircher directs technology and innovation at APS. He said battery storage will be developed over the next six years to store solar energy. “That’s the equivalent of about 3 million solar panels.” (Photo by Peter Gong/Cronkite News) 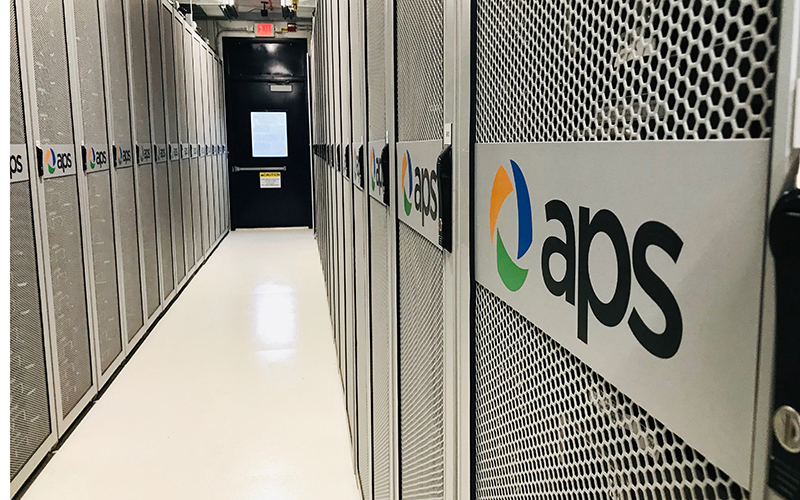 APS plans to add more battery storage over the coming years to its solar plans so customers can use solar energy during peak use times after sundown. (Photo by Peter Gong/Cronkite News)

PHOENIX – Arizona Public Service Co. plans to add hundreds of megawatts of battery storage by 2025 to its solar power plants so customers can keep using solar energy when the sun sets.

Arizona’s largest utility announced last week that a new plan to add 850 megawatts of battery storage and at least 100 megawatts of new solar generation by 2025.

It’s one of the largest battery storage initiatives in the country, which is why U.S. Energy Secretary Rick Perry on Friday toured one of APS’s renewable energy facilities an hour’s drive west of Phoenix.

“The holy grail in this whole renewable energy quest is in energy storage,” Perry said in a downpour after the tour.

Perry said Arizona is on the forefront of a national effort in clean energy storage.

“Today (Friday) is a great example of an all-of-the-above energy policy which this country is striving towards,” he said.

APS Chairman and CEO Don Brandt said on the company’s website that Arizona is a national leader in solar energy.

“The challenge is, no one has figured out how to stop the sun from setting at night,” Brandt said. “As storage technology improves and declines in cost, we will increasingly be able to store the power of the sun cost-effectively to deliver when our customers need it.”

Arizona is known for more than 300 sunny days a year, and power companies have tapped into this renewable source. The state ranks second to California, according to the U.S. Energy Information Administration, for generating solar energy, but it’s hard to store that power when the sun sets, a time when people often need power the most.

Scott Bordenkircher, director of technology and innovation at APS, said the storage will be developed over the next six years. “To put that in perspective, that’s the equivalent of about 3 million solar panels or 10,000 electric vehicles.”

Bordenkircher said the company’s announcement means Arizona will be second only to California in terms of the size of batteries being used.

The batteries are stored in a facility, and stacked on top of each other like building blocks. The storage system gets power from the sun during the day. Then, the energy from the solar panels gets transferred to the batteries. When the sun goes down, battery power activates allowing customers to use solar energy at night.

Patrick Graham, state director of the Nature Conservancy in Arizona, called the initiative an important step in protecting the environment.

“This really is the pathway to moving towards clean energy,” Graham said. “It’s short-term storage, so it’s not going to last for long periods of time. But it’s critical in helping balance out the reliance on renewable energy.”

Barbara Lockwood, vice president of regulations at APS, said bringing hundreds of batteries online will be an investment, but it won’t cost customers more than they already pay for electricity.

“It certainly costs money, but the great news is that energy storage costs have declined to the point where it’s competitive with sources of generation,” Lockwood said.

Arizona is second only to Nevada in solar energy potential, according to the U.S. Energy Information Administration. But in 2016, solar accounted for only about 5 percent of Arizona’s net electricity generation.

APS plans to install six battery systems at existing solar plants in Maricopa County and Yuma by 2020. And more storage and solar power will come online by 2025.