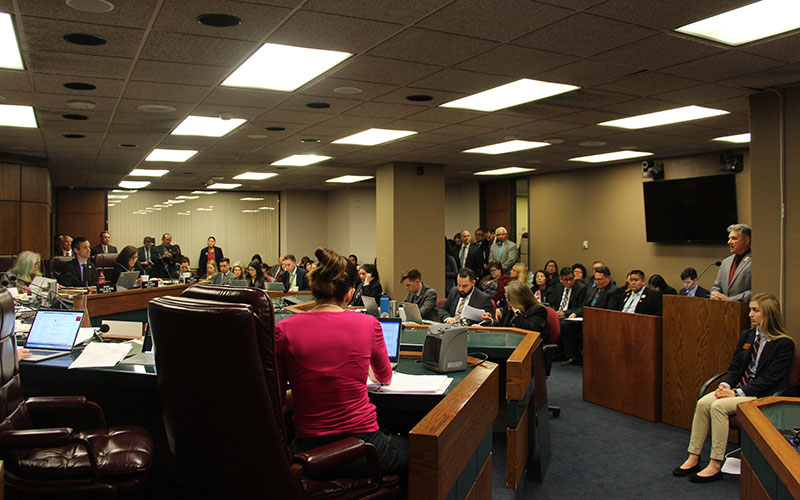 A full house was present as the Appropriations Committee voted 6-3 Tuesday in favor of moving SB 1163, the newly named sports betting bill, along in the legislative process of the Senate. (Photo by Joshua Shure/Cronkite News)

PHOENIX – In front of a packed Senate hearing room, the Appropriations Committee voted 6-3 Tuesday in favor of moving SB 1163, the newly named sports betting bill, along in the legislative process of the Senate.

Senator Sonny Borrelli (R-Havasu City) enacted a strike everything amendment to a prostitution classification bill, SB 1163, that allowed him to remove the original text of the bill and replace it with new language that would legalize sports betting in Arizona by giving exclusivity to the state’s Indian tribes.

The bill would require a tribal-commercial relationship which would result in tribal-owned kiosks in bars and private venues, like the Elks or VFW.

In the past month, the Arizona Senate Commerce and Public Safety Committee heard and discussed SB 1158, the original sports betting bill sponsored by Borrelli. However, SB 1158 was not able to make it out of the committee so Borrelli enacted a strike everything amendment to SB 1163 to allow another committee to discuss the subject matter.

A strike everything amendment, or a striker for short, is when a senator removes the entire text of a bill and insert new text that does not need to have any relation to the original bill.

Many in attendance at the hearing were representing tribes that are a part of the Arizona Tribal Gaming Compact. Except for the Navajo Nation, all the tribes in attendance expressed opposition to the bill prior to the vote in favor of moving forward with the bill.

“The Navajo Nation economy is facing a crisis. Thousands of Navajo jobs are threatened as the local mines and power plants close,” said Otto Tso, Council Delegate of the Navajo Nation. “Indirectly it affects about 1600 jobs of the Navajo due to these closures and this bill is basically about revenue, jobs and how nations can sustain themselves. This is an opportunity that will happen the Navajo people of the northern region.”

Most opposition at the hearing addressed how the tribes should have the ability and power to negotiate changes in the gaming compact prior to any legislature moving forward with a proposed sports betting bill.

Borrelli was adamant that SB 1163 was not a mandate and is simply trying to legalize sports betting in the state to allow the tribes to negotiate amongst themselves the specifics for how to make it operational.

A major difference between SB 1158 and SB 1163 was that in the newly updated text, a prohibition of sports betting would be placed upon Maricopa and Pinal counties.

The original SB 1163 text was significantly different from the new subject matter. It classified employment at a house of prostitution as a Class 1 misdemeanor and those who operate a prostitution enterprise as a Class 5 felony. However, all text relating to prostitution was completely removed to allow sports betting to be the new topic.