Trucks from Mexico line up to enter Arizona through the Mariposa Cargo Facility in Nogales. CBP officers at this port found nearly 650 pounds of fentanyl and methamphetamine hidden in a cucumber truck late last month. (Photo by Nicole Ludden/Cronkite News) 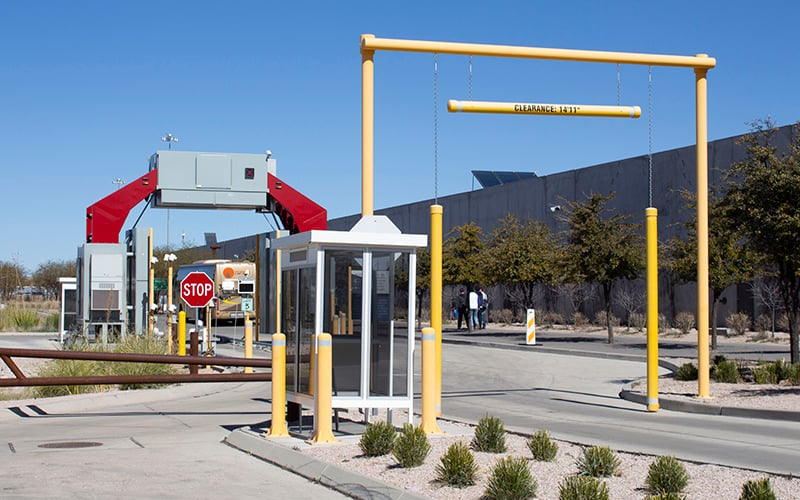 The Z-Portal is a drive-through X-ray imaging system designed to detect structural abnormalities in vehicles where drugs – or explosives – could be hidden. (Photo by Nicole Ludden/Cronkite News) 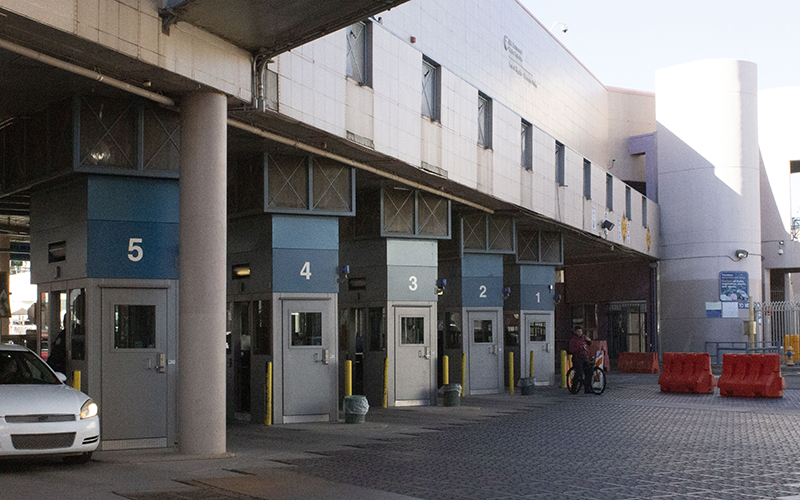 Thousands of travelers on foot and in vehicles cross the U.S.-Mexico border at the Dennis DeConcini Crossing in Nogales every day. (Photo by Nicole Ludden/Cronkite News)

NOGALES – Customs and Border Protection officers in late January seized a record 245 pounds of fentanyl, a deadly synthetic opioid, at the bustling commercial crossing in Nogales. A bust officials attribute to the use of technology and alert officers while on the job.

Officers at the Mariposa Cargo Facility, one of four ports of entry in the city, found more than 400 packages of fentanyl and methamphetamine hidden in the floor of a cucumber truck. The total street value was close to $5 million.

President Donald Trump for years has pushed for construction of a wall to keep drugs from entering the U.S. at the southern border, discounting CBP statistics showing that most drugs are smuggled through the hundreds of ports of entry along the nearly 2,000-mile border with Mexico. 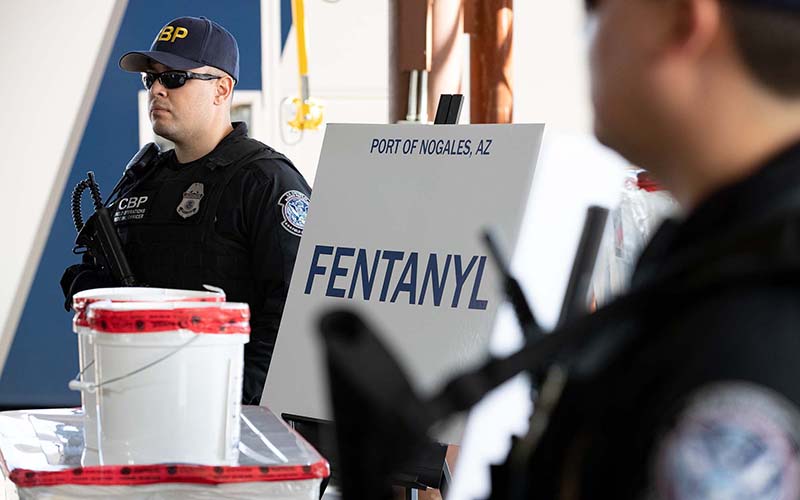 As fentanyl seizures rise, so do safety concerns around the deadly drug

However, CBP officers use proactive methods of drug detection every day to find narcotics at ports of entry, employing tactics and technology rather than a physical barrier.

Technology – as simple as a mirror on a stick and as complex as a truck-size X-ray scanner – is crucial to the work they do.

CBP Supervisory Officer Hugo Nuñez said the cucumber truck in which the fentanyl and meth were hidden “was targeted by our inspectional assets, we ran a canine on it and we also used our X-ray capabilities to detect it.”

Where funds for additional border security should go is a topic of heated debate, although federal authorities already are on record highlighting the importance of adding more technology to stop drugs and undocumented immigrants from crossing through.

In a proposal for increased border security spending, the Trump administration requested $675 million for “Non-Intrusive Inspection” technology, which it says “would allow CBP to deter and detect more contraband, including narcotics, weapons, and other materials that pose nuclear and radiological threats.”

However, a range of technology already is in use at U.S. at ports of entry.

“CBP is extremely mindful of the important role that technology plays in our operations,” CBP spokeswoman Teresa Small said in an email. “Technology is an invaluable force multiplier that enhances our layered enforcement capabilities at the ports of entry.”

On a recent day in February, a steady stream of trucks was rolling in and out of the Mariposa port of entry, where CBP agents inspect all commercial cargo for contraband. If a vehicle is flagged for secondary inspection, it goes through an advanced X-ray scan called the Z-Portal, which rapidly scans for the presence of concealed narcotics without high levels of radiation. According to CBP, it would take 2,000 exposures to the Z-Portal to equal the same amount of radiation as one chest X-ray.

Although the Z-Portal can help detect voids in vehicles that officers might not notice otherwise, such as the hidden compartment on the cucumber truck, CBP uses a variety of technology to find illegal substances.

Some of the most helpful technology CBP utilizes also is the simplest, Nuñez said: an angled mirror attached to a metal rod called a tapper.

“We use our mirrors for visual inspections,” Nuñez said. “It allows us to look under cars, into spaces where we can’t really see really well.”

Border patrol agents also use fiberoptic scopes to search gas tanks and other openings in vehicles that can’t be assessed superficially.

There has been an uptick in the amount of methamphetamine and fentanyl seized at ports of entry within the last couple of years. However, is technology doing a better job of detecting drugs at ports of entry, or are more drugs being illegally transported into the U.S.?

“We’re not getting even a small piece of what they’re bringing through,” CBP Officer Joseph Harris said. “I think us utilizing this technology does help a lot, but I also think that there’s also a lot of drugs that are coming through.”

In Nogales, the U.S.-Mexico border is marked by tall metal fencing strung with coils of razor wire that divides two towns with the same name. In Nogales, Sonora, pastel-painted shops and homes line rolling hills near a vibrant sign reading “Nogales.”

The CBP-controlled ports of entry in Nogales oversee the transfer of thousands of pedestrians and vehicles. According to CBP, $7.3 million dollars a day enters the U.S. economy through Arizona ports of entry, of which Nogales is the largest.

Nearly 3 million people have crossed at Nogales ports of entry since October 2018, according to data from CBP.

In his Feb. 15 declaration of a national emergency at the border, Trump has pinned his demand for a wall to the issue of drugs entering the U.S.

“You listen to politicians, in particular certain Democrats, they say (drugs) all come through the ports of entry,” he said at the Rose Garden announcement. “It’s wrong, it’s wrong. It’s just a lie. It’s all a lie.”

However, numbers from CBP show most narcotics that enter the U.S. do come through ports of entry. According to the most recently released data, more than 120,000 pounds of cocaine, heroin, methamphetamine, fentanyl and other narcotics were seized at CBP ports of entry in fiscal year 2018.

However, Harris notes, CBP is doing the best they can with the resources given to them.

“It happens every day. People might think that there’s no problem here, but there really, actually is a big problem and we’re doing everything we can to stop it,” Harris said.

David Danelo, the executive director for policy and planning for CBP in 2011 and 2012, is a senior fellow with the Global Initiative Against Transnational Organized Crime. He believes the current state of technology used by CBP is helpful, but only if there are enough officers available to use it.

“If you have an X-ray that hits one of every 10 vehicles, but you only have enough personnel to search one of every 30 vehicles effectively, well your effectiveness to physically perform a search in response to a technological indicator is reduced,” he said.

Danelo notes that CBP officials fight an uphill battle in detecting hard drugs entering the U.S. Narcotics often are hidden in cargo or secret compartments of vehicles, creating the need for advanced technology, such as internal scanners.

How drugs are detected at ports of entry

When a vehicle from Mexico approaches an entry port, it is scanned by a radiation portal monitor that, according to CBP, can “detect the smallest amounts of radioactive material in the vehicle or its occupants.” The inspection requirement stems from the Sept. 11, 2001, terrorist attacks in New York, Washington and Pennsylvania.

The thoroughness of the inspection is up to the discretion of the CBP officer.

When the license plate of the vehicle is scanned, it gives data from CBP databases to the officer in the entry booth. In a matter of seconds, the officer must decide whether the person in question is a threat to the U.S. by examining the person’s immigration status and all travel documents he or she holds.

The CBP officer also can use a tapper and mirror to quickly scan for illegal material the vehicle may be concealing.

From here, a vehicle may be flagged for a secondary inspection, which could include a combination of a canine unit, a trip through the Z-Portal scan or searching the vehicle with a fiberoptic scope.

Danelo, with the Global Initiative Against Transnational Organized Crime, stresses the importance of this initial contact, as well as the pressure it can place on enforcement officers.

Nuñez, the CPB supervisory officer, agrees that the agency is doing the best it can with the technology available, especially considering the record fentanyl seizure at the Mariposa Cargo Facility.

“We use the same technologies and methods to detect all contraband. I think it’s pretty effective, and I think as an agency, we’ve proven that, especially with that fentanyl seizure,” he said.

However, the threat of narcotics entering the U.S. is very real, and supporters of a border wall insist it would prevent drugs from entering the country.

“There’s this concept that the border is a space of vice,” Danelo said. “There is a very real drug trade that is ongoing, there’s very real dangers and violence that unfold throughout Mexico. However, there are real dangers and violence in the United States. I don’t really think that the idea of what the United States wants to represent on the world stage is a wall from sea to shining sea.”

Instead of a wall that discourages people from entering the U.S., Danelo wants to see ports of entry modernized.

“All we’ve been doing is talking about border security. We’ve answered the question about how to keep drugs out over and over again,” Danelo said. “What we really need to be talking about is how do we create a 21st century Ellis Island? What does it really look like to welcome people into the United States?”