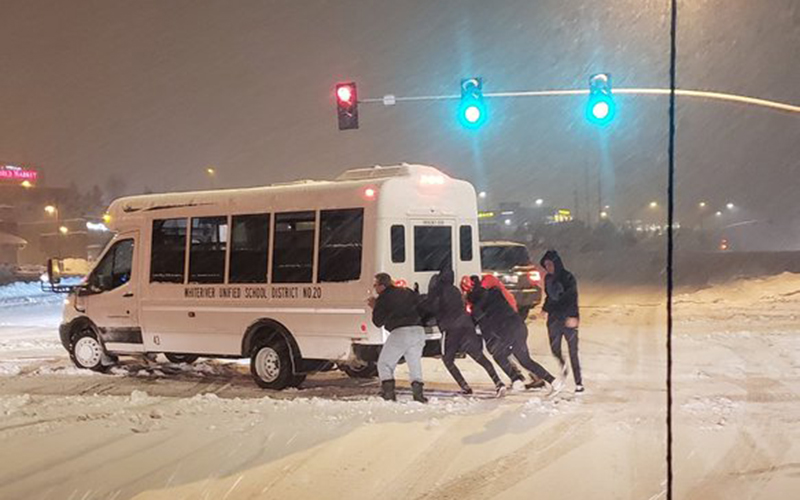 PHOENIX – Scheduling decisions surrounding basketball tournament games in Prescott Valley, which was hit by a severe winter storm, have left some coaches and fans critical of the Arizona Interscholastic Association.

The governing body of high school sports in the state announced Wednesday it would continue with plans to hold semifinal and championship games in the 1A and 2A divisions despite weather forecasts calling for significant snowfall to hit the area.

On Friday morning, approximately 90 minutes before the first playoff game was to start, the AIA reversed its decision, saying they feared for the safety of the 13 schools already in the area to make it to Findlay Toyota Center and that they should say in their hotels. Later in the day, the AIA changed course again and said weather had improved and that all but three games would be playing in the Prescott Valley Friday and Saturday.

“I get that there are more schools in the Phoenix area, but that doesn’t mean you have to totally disregard the northern schools,” said Adam Lopez Falk, a high school basketball fan from Holbrook.

“We asked the 1A and 2A teams to join a conference call on Wednesday morning, before the weather advisory, to discuss postponing the tournaments,” AIA spokeswoman Shay Pausa said on the organization’s Facebook page. “ Many teams, for a variety of reasons, did not want to postpone. We did not, at that point, realize the severity of the storm and the potential safety risk. In hindsight, that was a mistake.”

Kyle Goklish, coach of the Alchesay boys basketball team, said his team left Whiteriver on a bus at 8:30 a.m. Thursday.

“It was already snowing,” he said. “We had a two hour delay between Globe and Superior because it got real bad. We didn’t get into Prescott till about 5:30 in the evening.”

Goklish said what should have been a four-hour drive turned into nine.

Lee Patterson, a sports radio personality who covers many games around the state, tweeted a picture of what he said was the “Alchesay girls hoops team pushing their bus through an icy intersection in Prescott.”

“The AIA told us Thursday that if the team didn’t make it in time to the games, we would have to forfeit,” said Cory AndAri of Whiteriver, a supporter of Alchesay High School basketball. “We checked the Weather Channel app and decided it wasn’t safe enough for our family to travel to the game. … We haven’t missed a game all year.”