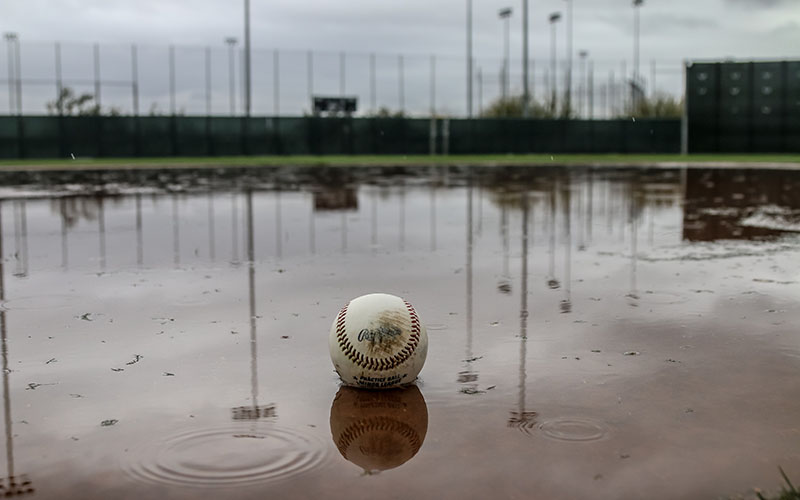 Rain on Thursday morning caused delays and cancelations of workouts all across the Cactus League. (Photo by John Mendoza/Cronkite News)

PHOENIX – February means the start of baseball season in Arizona. Out-of-town fans hop on flights to escape the cold and watch with optimism their respective teams.

A major winter storm hit the Phoenix metropolitan area, dropping heavy rain and temperatures into the 40s. Hail was spotted at Surprise Stadium, home of the Texas Rangers and Kansas City Royals, and a game at Mesa’s Hohokam Stadium between the Seattle Mariners and Oakland Athletics was called after nine outs. 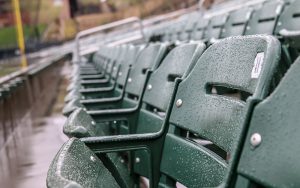 Rain covered the seats at Salt River Fields just two days before the Rockies and Diamondbacks are set to kick of their spring training schedules. (Photo by John Mendoza/Cronkite News)

“There’s no postponements in the Cactus League,” league spokesperson Andrew Bagnato said. “(If) you lose a day you lose a day, and so it’s tough especially for fans coming from out of town.”

It was another scheduling hit for spring training. In 2018, the regular season was expanded to provide four additional off-days for players. This season, all 30 teams start on March 28, the earliest Opening Day in history, excluding international openers.

“It’s difficult because people wait so long for baseball,” Bagnato said. “And then you wake up this morning and the streets are running with water in the Valley.”

The rain is expected to taper off by Friday evening, the National Weather Service reports.

The weather is expected to impact ticket sales and game revenue. In 2018, the Cactus League generated a $373 million bump for Arizona’s gross domestic product, according to a study by the L. William Seidman Research Institute at Arizona State’s W.P. Carey School of Business.

Despite the sight of tarps at stadiums, it was business as usual for many of the 15 Cactus League teams. 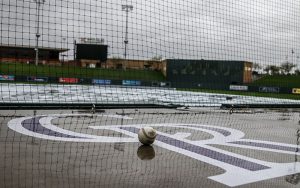 The Colorado Rockies moved their workouts into the safety of the batting cages as rain fell throughout Thursday morning. (Photo by John Mendoza/Cronkite News)

“We’re actually getting stuff done, even though it’s an ugly day,” Giants manager Bruce Bochy said. “Guys are getting their swings in the cage, and they got their throwing in.

“For the players, while they might not like the weather outside, being able to focus on the cage and the weight room is a benefit.”

“When it’s raining like this you do a lot of work inside,” he said. “I think any time you get a day like that, to rest your body, to do nothing outside, it’s pretty good.”

The A’s and Mariners are scheduled to play again Friday in Peoria. A full slate of games is scheduled for Saturday.