Critics, including those rallying Monday outside the White House, challenged President Donald Trump’s claim of an emergency at the border, pointing to his comment that he didn’t have to do it, he just wanted to do it “much faster.” (Photo by Andrew Howard/Cronkite News) 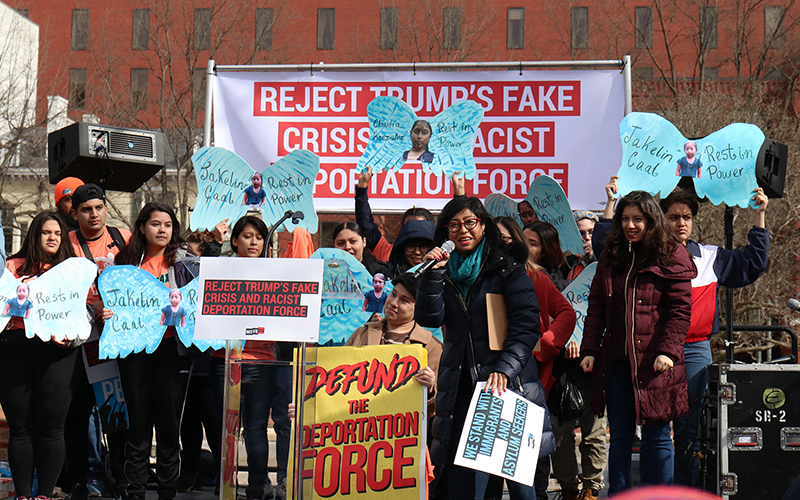 Students from United We Dream, led by co-founder Cristina Jiménez, rally in Lafayette Square against President Donald Trump’s declaration of a national emergency at the southern border. It was one of scores of such rallies across the country. (Photo by Andrew Howard/Cronkite News) 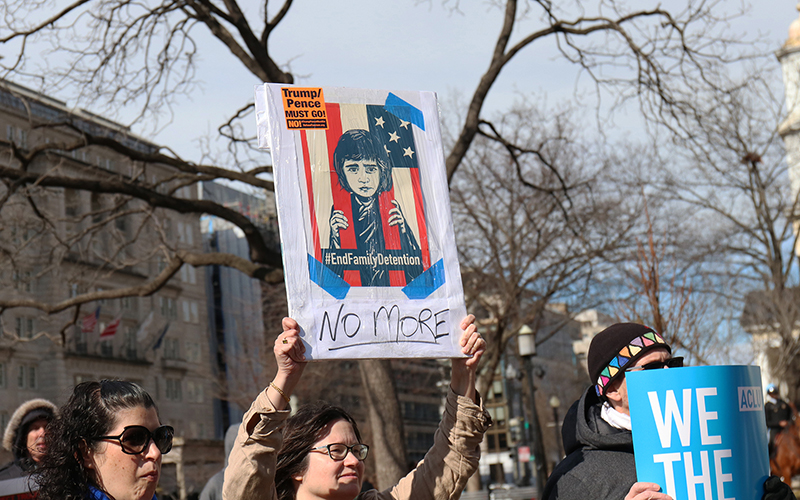 Many of the hundreds protesting Monday outside the White House came from immigration advocacy groups, including United We Dream. But the rally also included speakers from such groups as MoveOn.org and the American Civil Liberties Union. (Photo by Andrew Howard/Cronkite News)

WASHINGTON – Hundreds gathered outside the White House Monday to protest President Donald Trump’s declaration of a national emergency at the southern border, a move the protesters called a “massive abuse of presidential power.”

“Stop the fake emergency. Defund the deportation force,” said Cristina Jiménez, co-founder of United We Dream and one of the event’s organizers.

The rally, one of scores around the country, was the latest pushback against Trump’s declaration, which had already drawn legal challenges within hours of his announcement Friday. The two-hour protest included speakers from civil rights, religious and legal organizations, who were often interrupted by chants of “no hate, no fear, immigrants are welcome here.”

But when Trump issued the emergency declaration Friday, he said it was needed to stem “an invasion of our country, with drugs, with human traffickers, with all types of criminals and gangs.”

Under the emergency declaration, he said he has the authority to divert $6.6 billion from other accounts – mostly from the Defense Department – toward construction of a border wall. That money would be added to the $1.4 billion that Congress approved for a wall, bringing the total to $8 billion for this year.

Within hours of Trump’s announcement Friday, at least two lawsuits had been filed challenging the president’s ability to shift the funds, and another was filed Monday by 16 states. Even as he announced the plan, Trump said he expected legal challenges but predicted he would ultimately win in court.

One speaker at Monday’s rally said such protests were important because opponents “cannot wait and assume the courts will save us,” adding that “Congress has a role to play” in fighting Trump’s national emergency declaration.

“There is no national emergency,” Jiménez said. “Why are we here? Because Trump is a racist man.”

Critics seized on Trump’s own comment during his announcement that he “didn’t need to do this. But I’d rather do it much faster” as evidence that there is no real emergency.

A request for comment from the White House was not returned Monday. But Matthew O’Brien, director of research at the Federation for American Immigration Reform, said critics are misinterpreting what emergency means.

“It doesn’t have to be an emergency in the sense that the U.S. is facing an invasion or some kind of imminent crisis,” O’Brien said Friday. “It refers to the need of the president to use power he would not ordinarily use in the course of his everyday activities, and to shift priorities without needing to wait for Congress.”

Arizona Rep. Andy Biggs, R-Gilbert, said last week that executive action like Trump’s should be used sparingly, but that he supports the president’s actions.

“The southern border is the gateway for drug, human and sex trafficking, which afflicts countless American communities,” he said in a statement. “I support his decision.”

The decision split the state’s congressional delegation along party lines, with Democrats calling it “fear-mongering” and Republicans defending it as “necessary to protect American lives.”

There was no such divide outside the White House on Monday, where many of the protesters were like Dulce Lopez, a recipient of Deferred Action for Childhood Arrivals.

“I think the national emergency that Trump has claimed is nothing but fake,” Lopez said. “The real emergency we have is him being in the White House right now.”

One protestor, Sister Ardeth Platte, said she was there because she wants “immigrants and refugees to be welcome in this nation,” adding that a wall “does not bespeak who we have been as a compassionate nation.”

“We heard today people speak from every perspective,” Platte said. “We are in solidarity with each other, and we want to have a government … where we come back to the values of the United States.”