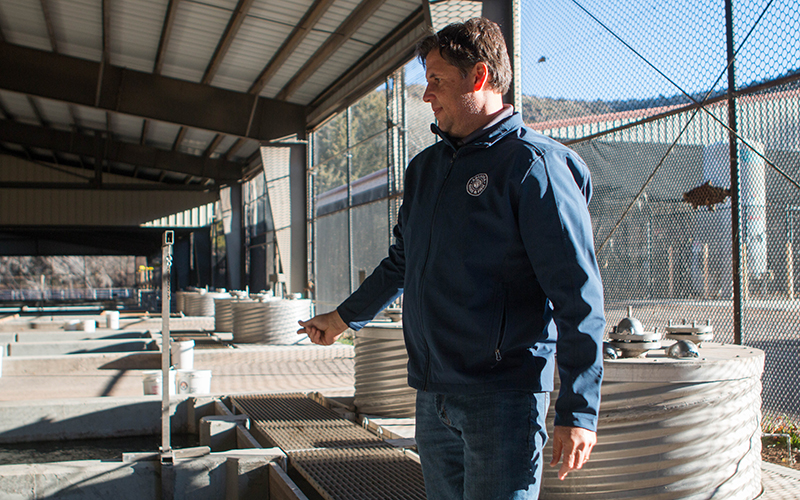 Geoffrey Rabinovich, statewide hatchery program manager for Arizona Game & Fish Department, is originally from Peru where his family was involved with shrimp farms. “To me, stocking fish is for people to fish but also for people to build lifetime memories,” he says. (Photo by Delia Johnson/Cronkite News) 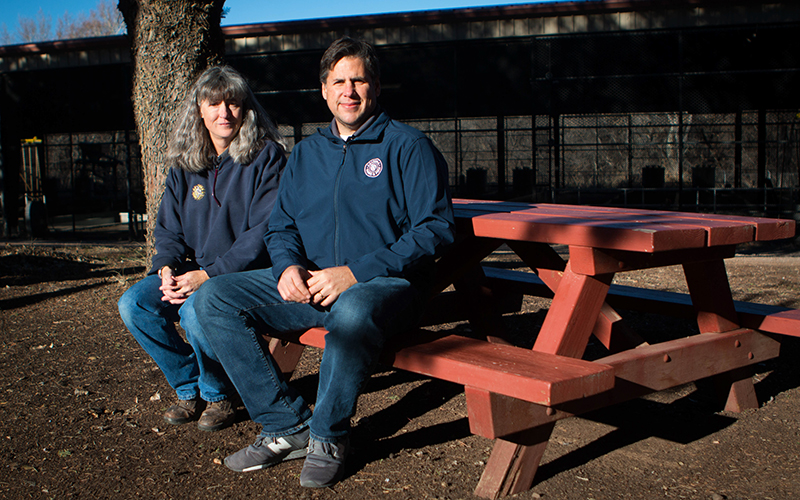 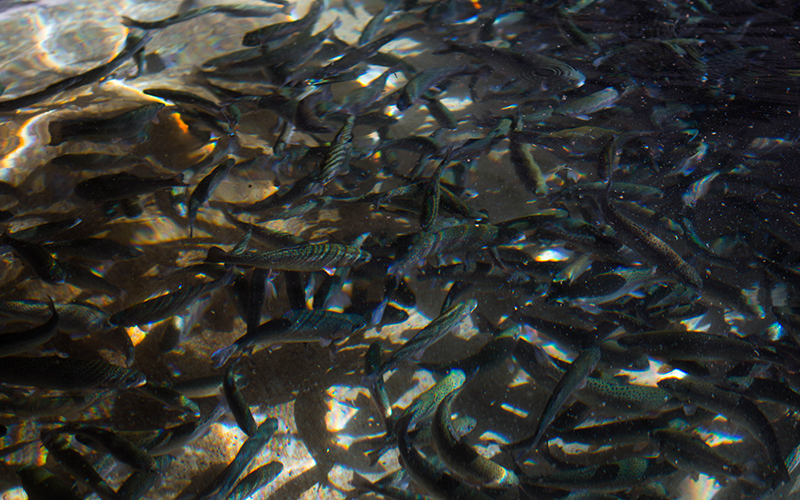 The hatcheries raise both rainbow trout and species native to Arizona. Native species are threatened by fire and environmental changes. “Once they’re gone, they’re gone,” manager David Fox says. They hope to help reestablish the population of Gila and Apache trout for recreational use. (Photo by Delia Johnson/Cronkite News)

FLAGSTAFF – David Fox beams when a picture of a Gila trout flashes on a computer monitor at Sterling Springs Hatchery, nestled at the top of Oak Creek Canyon.

“It was the highlight of my career here,” he said of his efforts to restore the speckled brown fish, which is found only in Arizona and New Mexico.

Outside his tiny hatchery office, concrete is mixed and poured as part of $3.3 million in overdue renovations. The facility’s pipes and valves leak, and some are more than 70 years old. Raceways, which are the channel-like basins the fish grow in, are crumbling. Completion is slated for the end of June.

Sterling Springs, the smallest of Game & Fish’s six hatcheries, supplies all the trout fingerlings to Page Springs Hatchery near Sedona, which produces more than half the state’s stocked trout – including brown and rainbow. Sterling Springs receives eggs from a federal hatchery in Montana, hatches and raises the trout in sanitary conditions, then trucks them to Page Springs.

Recreational fishing generates $1.47 billion annually in economic benefits for Arizona, according to the latest Economic Impact of Fishing in Arizona report, which comes out every five years. Among active anglers in 2013, 69 percent preferred to fish for trout, the report said.

“If Sterling Springs wasn’t repaired, we’re losing all the small fish that stock Page Springs, which produces 58 percent of the trout we are stocking the state with,” Rabinovich said. “That would probably have an impact of $400 million a year for the state.”

Sterling Springs Fish Hatchery is undergoing $3.3 million in renovations, including technology updates to allow the hatchery to partially reuse its water rather than send it back into creek. Manager David Fox hopes reusing water will improve the health of the trout raised there. (Photo by Delia Johnson/Cronkite News)

Geoffrey Rabinovich, statewide hatchery program manager for Arizona Game & Fish, points to holes in the pipes that supply spring water for the Sterling Springs Hatchery. The 70-year-old pipes will be replaced during the renovation to help conserve water. (Photo by Delia Johnson/Cronkite News)

David Fox manages the Sterling Springs Hatchery and lives at the secluded spot with his wife and two kids. They're staying in Flagstaff until hatchery renovations are completed, which is expected in June. (Photo by Delia Johnson/Cronkite News)

The water used for hatching trout must meet precise conditions. The optimal temperature is 45 to 55 degrees, and oxygen levels must be high enough to keep the fish from stressing. Climate change and rising temperatures are an ongoing concern for Arizona Game & Fish managers, although reliable snowmelt has kept Sterling Springs running. (Photo by Delia Johnson/Cronkite News)

Sterling Springs looks like a construction zone, complete with workers in neon orange and green vests, power tools and heavy machinery. In December, Game & Fish demolished all the outside facilities and is rebuilding the concrete raceways and covering them to prevent racoons, otters and other animals from eating the fish, Rabinovich said. The hatchery also will employ technology to operate with less water in the future.

The department will install a pump, so if creek levels drop, water can be pumped back up from the creek to be reused. A pipe liner will also be used to help the hatchery retain more water, said Cindy Dunn, the department’s west regional hatcheries coordinator. Both upgrades will allow the hatchery to operate with less water.

A couple years ago, the department started installing electronic flow meters at its hatcheries to monitor and record how much creek water comes in and out of each, Dunn said.

“With the new renovations, it’ll be exciting to see if our fish health improves being able to reuse the water to keep our fish healthy, to keep them from stressing out due to the lack of oxygen or the lack of water,” said Fox, the Sterling Springs manager.

Dunn, 51, who has worked with the hatcheries since 1992 and has lived onsite at Page Springs since 1995, said Sterling Springs hasn’t been greatly affected by the ongoing drought because it’s fed by snowmelt, but it’s always a concern.

“Another concern is, where do we put the fish? At times we have to juggle where we put them, because with the drought, waters are low, temperatures are high, the pH rises and we can’t put them in there,” she said. “We’ll find a place, but that has affected us as far as the drought goes.”

What it takes to raise fish in the desert

Raising desert trout comes with its fair share of challenges, including, of course, water. So conserving water is important, Rabinovich said.

“We don’t consume water,” he said. “Raising fish is not consumption, the water passes through to help us raise the fish and then (we) put it back in the creek the same way we found it: clean.”

The hatcheries use naturally flowing creeks to produce something for the public, but they’re not using up the water.

“The fact that a lot of the states have so much water they can have hatcheries just about everywhere, but in Arizona, we’re very limited as to where we can have them,” Fox said.

Oregon, California, Colorado and other Western states have quite a few more areas where managers can stock the fish, too, he said.

“You definitely don’t think of Arizona as a place to go fishing, but there’s some amazing fishing here. It just blows my mind,” Fox said. “Even in Oak Creek Canyon, the creek is so small and it gets so abused by people, but there’s still 20-inch Brown trout that people pull out all the time.”

In addition to the six Game & Fish hatcheries, he said, the U.S. Fish and Wildlife Service operates three fish hatcheries in Arizona, and there are a couple of independent hatcheries as well.

Arizona Game & Fish has operated hatcheries since 1922. Rabinovich said the last upgrades were made more than 25 years ago.

“Renovations are multimillion dollar projects and vary depending on each hatchery’s needs,” he said. “At this time, we don’t have the necessary funds to renovate the other hatcheries, but we are conducting repairs with the funds that each year we received for maintenance.”

Arizona Game & Fish doesn’t receive money from the state’s general fund or tax dollars, Rabinovich said. The funds to renovate hatcheries mainly come from sales of fishing licenses, stamps and tags – which generated more than $44 million in 2013, according to the Economic Impact of Fishing in Arizona report – as well as federal assistance from Sport Fish Restoration Funds and other money, he said.

The promise of June

Fox, his wife and their two kids, ages 11 and 13, are living in Flagstaff until the end of the renovations at Sterling Springs.

It takes a certain type of person with a certain temperament to work at the frigid, closed-in, somewhat isolated hatchery. And Fox, a social being, had to adjust to working by himself in the secluded environment.

“The building is kind of dark and cold and you talk to yourself a lot,” he said. “After awhile, you hear voices in the water.”

Of the many repairs going into the hatchery’s $3.3 million facelift, Fox is most eager for a new generator.

“When the snow is coming down an inch an hour and the wind is blowing and your power is out and your generator won’t start, then you’re dealing with issues,” Fox said. “There’s been a few times when I sat here in the basement in the dark thinking, ‘Oh God what’d I do'” getting into this line of work?

Yet the benefits of hatcheries outweigh all the inconveniences for the 16-year veteran of Arizona Game & Fish, who says they help connect people with their families and the environment. And come June, he’ll have a newly renovated facility to resume growing fish for anglers in the desert.