President Donald Trump’s announcement of a national emergency at the southern border prominently featured Angel Families – those who have lost loved ones to crimes committed by immigrants – in the front row of the Rose Garden event. (Photo by Shealah Craighead/White House) 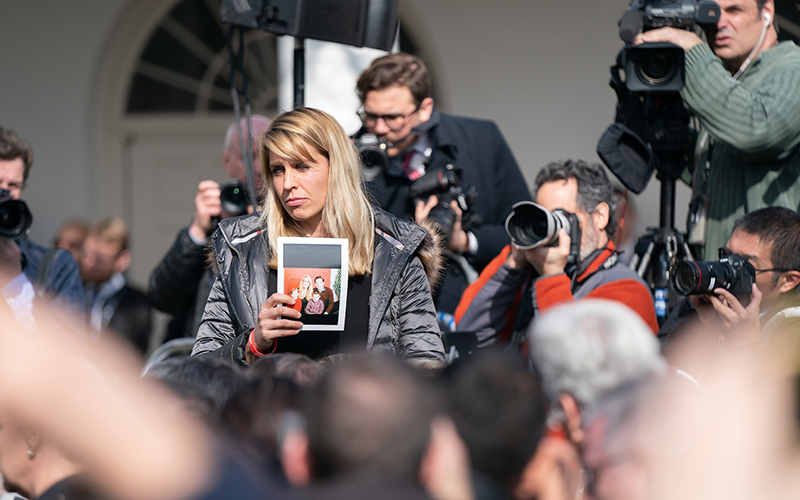 In a wide-ranging talk that went from trade negotiations with China to southern border security, President Donald Trump asked Angel Moms who were at the Rose Garden event to stand with the photos of family members they had lost. (Photo by Shealah Craighead/White House)

But Republicans praised the president for taking action they said is needed to “protect American lives.”

Trump’s declaration came just hours after Congress passed a budget bill that included $1.375 billion to fund construction of more border wall, well below the $5.7 billion he had been demanding. In response, he declared a state of emergency, which allows the president to shift funds between accounts.

White House officials said Friday that the emergency would allow the addition of about $6.6 billion to the money Congress allocated, bringing border wall construction funding to about $8 billion this year.

In a Rose Garden announcement Friday, Trump said the declaration is needed because “we don’t control our own border.”

“I’m going to be signing a national emergency,” Trump said. “We’re talking about an invasion of our country with drugs, with human traffickers, with all types of criminals and gangs.”

The declaration is almost certain to be challenged in court – a fact Trump referenced in his speech – but he said he has the authority and is confident he will ultimately win. He said presidents over the last four decades have declared 58 national emergencies and some governors have declared border emergencies, including former Arizona Gov. Janet Napolitano.

Rep. Andy Biggs, R-Gilbert, called the declaration a serious step, but one he said needs to be taken.

“The southern border is the gateway for drug, human and sex trafficking, which afflicts countless American communities,” Biggs said in a statement late Thursday. “I support his decision.

“Though executive action should always be taken lightly – and never outside of constitutional bounds – President Trump correctly views the situation at the border as an emergency,” Biggs said.

But Rep. Raul Grijalva, D-Tucson, “vehemently” condemned what he called “Trump’s unconstitutional power grab with his intent to declare a national emergency.”

Grijalva was one of just a handful of Democrats to vote against the budget bill Thursday because it included wall funding.

“Whether shutting down the government for his wall or an emergency declaration, Trump continues to manufacture a crisis at the southern border and reinforce it with fear-mongering and outright lies,” Grijalva said in a statement Thursday, after Trump revealed his plans.

White House officials defended the president’s decision Friday, saying there is precedent for the move and accusing Democrats of playing partisan games.

“This is authority given to the president in law already,” Mick Mulvaney, acting White House chief of staff, said in a conference call Friday. “It’s not as if he didn’t get what he wanted and waved a magic wand to get some money.”

But Trump did not get what he wanted. Despite the fact that the budget included just under $1.2 billion for other border initiatives, including screening technology and drug-detection, Trump did not get the billions he wanted for a wall.

Rep. Ruben Gallego, D-Phoenix, who tweeted that “Trump’s presidency is the real national emergency,” said Friday that he was particularly disturbed by the diversion of Pentagon funds toward the wall.

“As a member of the Armed Services Committee, we authorize billions of dollars to improve our bases every year,” Gallego said in a separate tweet. “That money is to build facilities to recruit, train and retain the world’s best military. A fake national emergency takes money from that mission.”

White House officials said Friday that any of the diverted money would be “backfilled” for those agencies in next year’s budget.

But Rep. Greg Stanton, D-Phoenix, said a national emergency declaration should “only be used for real national emergencies – not to make up for political failure – and should not be used as a work-around to the legislative process.”

“This is the wrong way to govern, and the president is only creating a dangerous precedent for our country,” Stanton said in a statement Friday.

A statement from Rep. Paul Gosar, R-Prescott, said there is a real emergency at the border and that Trump should “take all measures necessary to protect American lives. We must secure our border.”

That was echoed by Rep. Debbie Lesko, R-Peoria, who said that Americans “can no longer deny the crisis that is happening at our southern border.”

“I will support President Trump’s use of his executive authority to end this crisis,” Lesko’s statement said. “This threat to our national security is a national emergency and we must take action.”

While he agreed that there is a need for more border security, Rep. Tom O’Halleran, D-Sedona, said “this is not the way it should be done.”

“I am ready to work with my colleagues on both sides of the aisle to protect our communities,” O’Halleran said in a statement, “and I encourage President Trump to work with us, not against us.”