No longer on the fringe: Technology makes golf accessible to disabled community 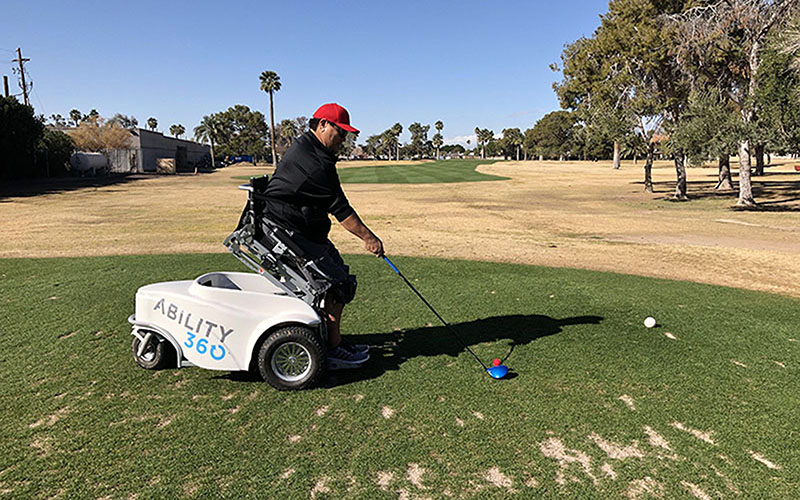 After being the victim of a shooting, Diego Suazo found help in his recovery by playing golf. The Paramobile, a stand-up wheelchair, helped him do that. (Photo by Stephen Perez/Cronkite News).

PHOENIX – It was 22 years ago when Navy veteran Diego Suazo was the victim of a shooting that changed his life.

Suazo was at a New Year’s party with his family when he tried to break up an argument between his cousin and another person.

“We were there for about five to 10 minutes, and I go outside and my cousin is arguing with some guy,” he said.

A fight broke out, and when Suazo tried to break it up, the man fighting his cousin took a swing at Suazo. Another man shot Suazo, with the bullet striking him in the back. He collapsed to the ground and knew immediately that he was in trouble.

The shooting left him paralyzed from the waist down. He found a difficult recovery aided by an unlikely source: adaptive golf. 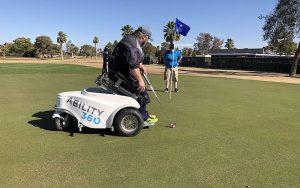 According to the American Physical Therapy Association, more than 56 million Americans are living with some sort of disability. Adaptive sports can help them remain active and healthy and provide a competitive outlet.

And improved technology is providing more opportunities than ever. Suazo, for instance, uses a Paramobile chair in golf. The chair is designed to move over rough or uneven terrain, and the seat and chair back lift the user into a standing position.

It’s part of a future he never envisioned after being a shooting victim more than two decades ago.

“When I fell. I couldn’t breathe or move my legs,” he said.

He realized just how serious his injuries were when he was inside an ambulance and a paramedic implored him not to fall asleep.

“I remember thinking to myself, ‘That’s what they tell people who are dying.’ That is when I knew it was serious,” he said.

He found himself faced with the daunting task of relearning how to do all of the things that had once come naturally.

“I was 24 years old, and I had to learn to do everything again,” he said. “It was just trying to find the easiest and most efficient way to do things.”

Suazo had always been active, and he turned to sports to help in his recovery. He had been involved in team sports, but he found an unexpected outlet after the spinal injury by playing golf.

“Playing sports was a huge recovery tool,” he said. “I have always played ball so being back and being competitive; it is always just fun being out there. And when you are out playing ball, you forget about the injury.

“I did a lot of teams sports but now I am just focusing on more individual sports.”

Anthony Netto co-invented the Paramobile chair and, through the Stand Up and Play Foundation, makes them accessible to those who can benefit from using them.

A veteran of the Gulf War while serving in the South African National Defense Force, Netto was on his way to a golf tournament in South African in 1994 when his car was struck by a drunk driver’s vehicle, leaving Netto a paraplegic.

After his injuries, he wanted to return to playing golf and found trying to play with conventional chairs too cumbersome. So he developed his stand-up chair. Netto still has the original version.

The chairs can be used for other activities, such as archery, shooting or fishing. And Netto said there are health benefits to moving into a standing position, such as increased blood flow.

“I loved being outdoors,” he said. “And after being injured, I needed to get outdoors and make mobility easier than being in the manual chair. This was a way of doing that and getting in an upright position, which is healthier than always being seated.”

After developing his first machine, he kept working on the design so that others could benefit from using the chairs.

“Other than using it for myself, I was originally just giving it away to friends and those I knew who needed it,” he said. “Then I started noticing there was nothing like this machine on the market. So I started making them and donating them to hospitals and organizations.”

Ability360, a Phoenix-based non-profit that offers and promotes programs to empower people with disabilities, developed an adaptive golf program that utilizes the Paramobile chairs for members.

Tim Surry, reception specialist and director of the golf program at Ability360, said the machines give users freedom.

“It is definitely an eye-opener,” Surry said. “The machines that we have actually get you out on the course. You don’t have to push through grass, uphill, which is definitely beneficial.

“It is just awesome. It puts a smile on people’s face.”

Suazo and others wouldn’t be participating in a sport like golf without Ability360 and technology like the Paramobile chairs.

“I would not be able to get out to the course and play if it wasn’t for Abilty360 and the Paramobile machines,” he said. “They provide opportunities for anyone with a disability to come out and participate and enjoy playing the game of golf.”