Members of Angel Families – people who have lost family members to crimes committed by immigrants here illegally – hold photos of loved ones as they rally in support of border agencies. (Photo by Keerthi Vedantam/Cronkite News) 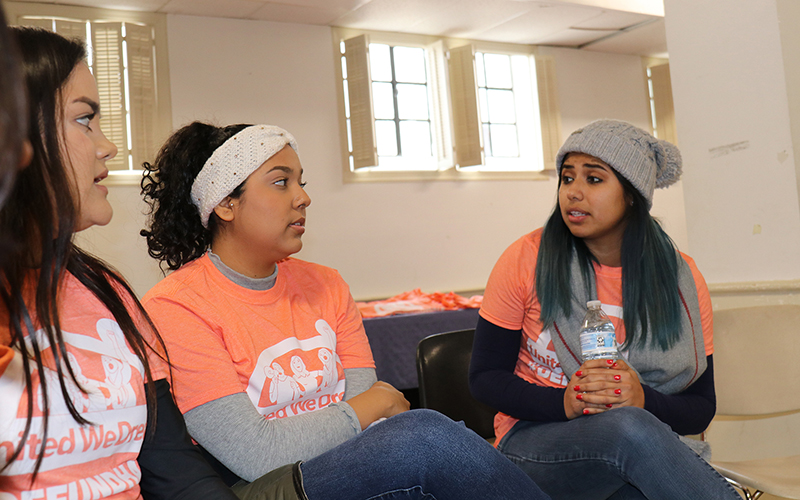 Jessica Rubio, right, is a Phoenix DACA recipient who came to Washington to call for the defunding of Immigration and Customs Enforcement, which detained and deported her brother in 2011. (Photo by Keerthi Vedantam/Cronkite News)

Her brother was standing outside their Phoenix apartment at 5 p.m. when ICE agents arrested him. By 3 a.m. the next day, he had been deported back to Mexico, ending six years of living in the U.S.

That was 2011, one year before the Deferred Action for Childhood Arrivals program took effect, allowing Rubio to remain in the U.S.

“The work permit I hold right now could have been the work permit that would have saved my brother,” Rubio, 26, said Wednesday in Washington where she joined dozens of activists who came to protest Immigration and Customs Enforcement. They say the agency is harmful to families separated in ICE raids and at detention centers.

But as they were calling for ICE to be defunded, another group stood a short distance away on the Capitol grounds demanding more funding for the agency.

They were Angel Families, people whose loved ones were killed by immigrants or overdosed on illicit drugs the survivors blame on border trafficking. They held signs as they called for stronger border security, including President Donald Trump’s border wall and increased ICE funding, among other demands.

The competing rallies came as House and Senate negotiators were reportedly nearing a deal on a budget bill that would include funding for the Department of Homeland Security, among other agencies. But published reports indicate the deal includes a reduction in the number of beds for ICE detainees and less than $2 billion for the border wall – well below Trump’s demand for $5.7 billion.

An impasse over wall funding led to the last government shutdown and Congress has until Friday to pass – and Trump to sign – a new budget or the government could shut down again. Trump said Wednesday that he was not happy with what’s been reported in the new budget bill, but added that another shutdown “would be a terrible thing.”

But while congressional Democrats and Republicans appeared to be reaching a compromise, the advocates outside the Capitol remained vocal and divided.

“With the deal that was announced yesterday, I see some Republicans saying it’s a great deal,” Homan said. “It’s a terrible deal.”

Those at the Angel Families event urged Trump to build a wall and increase funding for border security programs, including ICE. 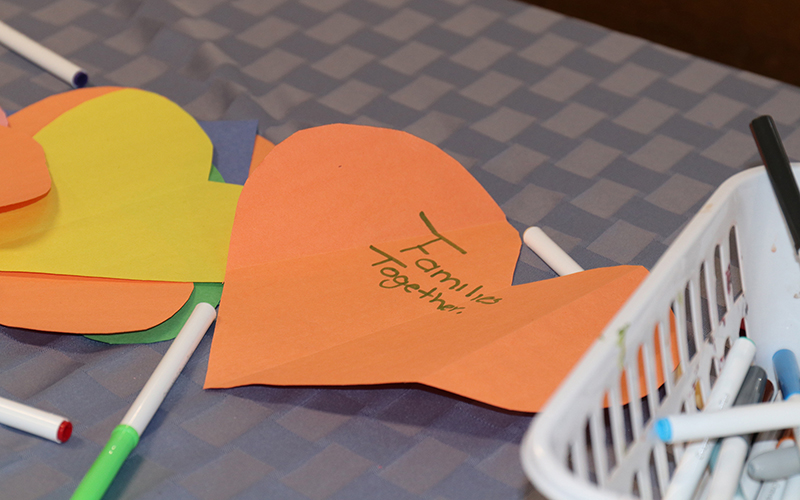 Members of United We Dream, in Washington to rally against a border wall and to call for defunding of Immigration and Customs Enforcement, write notes of support. (Photo by Keerthi Vedantam/Cronkite News)

But DACA recipient Karina Ruiz disagrees. The Phoenix resident came to campaign against ICE after experiencing what she called prevalent attacks on immigrants.

“It’s not anything you can understand unless you’ve experienced it,” said Ruiz, one of a handful of Arizona activists at Wednesday’s event. “We as a border state understand more about what it means to be stopped by the police and that ending in a deportation.

“As immigrants we see that border. We’re so close to the border we can see our family members yet we cannot cross it,” she said.

Ruiz thinks the budget deal does not do enough to stop family separations.

“Our message to Congress is very clear: We don’t want them to negotiate because even a dollar more is too many. One family more that’s separated … it’s one too many,” she said.

Rubio is one of those whose family has been separated. As a DACA recipient, she cannot leave the country to visit her brother in Jalisco, Mexico.

“I haven’t been able to see him for a while and I don’t even know when I’m going to be able to see him,” she said. “It hurts but at the same time I feel like I have a purpose here.”