An open House: Jaelen proud of dad Eddie but readily admits he has own big-time goals 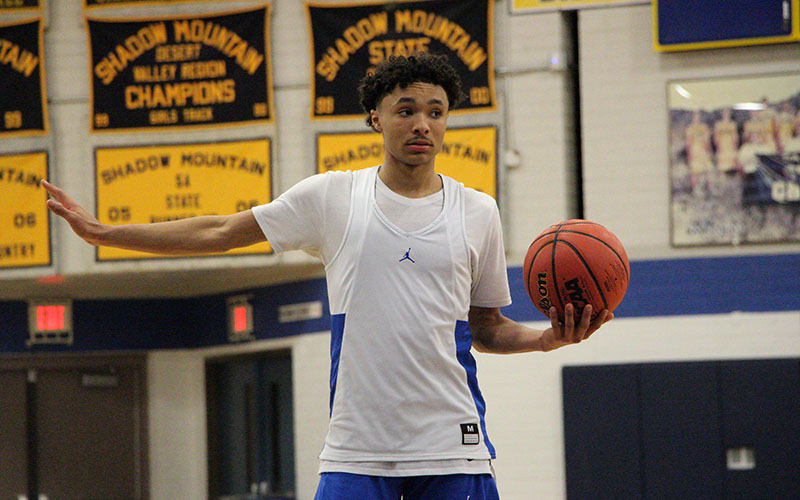 PHOENIX – Eddie House left Arizona State in 2000 with his name atop almost every scoring list in the school’s record book.

Now 19 years later, he remains ASU’s career, single-season and single-game scoring leader. And his name is next to three of the school’s top four single-game performances, including a school-record 61 points in a double overtime victory at California during his senior season, when he was named Pac-10 Conference Player-of-the-Year. He went on to carve out an 11-year NBA career and won a championship in 2008 with the Boston Celtics.

That’s a lot to live up to.

But Eddie’s son Jaelen, a senior guard at Shadow Mountain High School who has committed to play at ASU, has more in mind than his dad’s records.

Jaelen is aiming for even bigger things at ASU.

“My future goals are to win a national championship at ASU, and eventually make it to the NBA,” Jaelen said.

That’s no small task. The Sun Devils have never won a national championship in men’s or women’s basketball. They’ve never even qualified for an NCAA Final Four.

But Jaelen comes from a winning pedigree.

His uncle, Shadow Mountain coach Mike Bibby, also played in the NBA, spending 14 seasons with six teams. He won a state title as a player at Shadow Mountain in 1996 and a national championship as a freshman at Arizona in 1997.

Jaelen already has won three high school state championships as he and the top-seeded Matadors begin their quest for a fourth in a row Tuesday night. Shadow Mountain plays host to Moon Valley in a 4A Conference state playoff first-round game.

A state championship is one thing Eddie House never put on his résumé during his days at Hayward High School in northern California’s East Bay area.

“My greatest achievement playing basketball is probably winning three state championship rings and winning player of the year for my division,” Jaelen said.

Jaelen House and the Matadors defeated Tucson’s Salpointe Catholic, 83-79, in last season’s championship game, erasing a 22 point second-half deficit to win. He scored 30 points to lead the Matadors, but maybe more impressively House nabbed a mind-boggling 14 steals in that game.

Last season’s 4A final was a rematch of the 2017 championship game. In that one, House scored 19 points as Shadow Mountain beat Salpointe, 81-48. He had 14 points as a freshman in 2016 when the Matadors beat Agua Fria, 86-55, in the championship game. 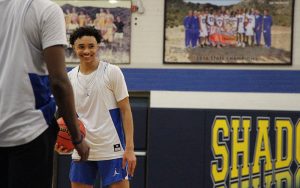 Jaelen House respects the accomplishments of his father but hopes to make his own mark. (Photo by Josh Shure/Cronkite News)

“It’s awesome when you have a player like this,” said Mike Warren, an assistant coach at Shadow Mountain. “He spoils you. We’ve been lucky enough to have him playing for us for four years, and he’s made an impact from the very first game he played. He’s a special talent and special kid.”

The 6-foot-1, 150-pound guard, who had a season-best 43 points against St. Mary’s, averages 22.3 points and 5.1 assists per game while sharing playmaking duties with his friend and teammate Jovan Blacksher. The two have been teammates since the fourth grade, but they will go their separate ways next season. At least as players. Blacksher has committed to play at Grand Canyon.

“Playing with Jaelen is really fun,” Blacksher said. “He has a high motor. He likes to play defense and likes to score. That’s my brother, man. We’ve known each other for a while, and I love playing with him. Love him off the floor. All of that, man.”

Off the court, Jaelen House is like a lot of teenagers. He likes to eat, play video games and work out. He admires the game of Celtics point guard Kyrie Irving.

On the court, Warren said Jaelen is driven to succeed.

The passion is evident even when the younger House is just talking about playing basketball.
“I love this sport so much because I feel like it’s an escape from everything,” he said. “I feel like I’m at my best playing this sport, and it’s really fun. I think it’s the best sport on Earth, to be honest.”

When the younger House arrives at ASU, there are bound to be comparisons to his father and reminders of those records. But the elder House just wants his son to enjoy the experience of playing for the Sun Devils.