Give it time, high school football’s Open Division will be a hit, California officials say 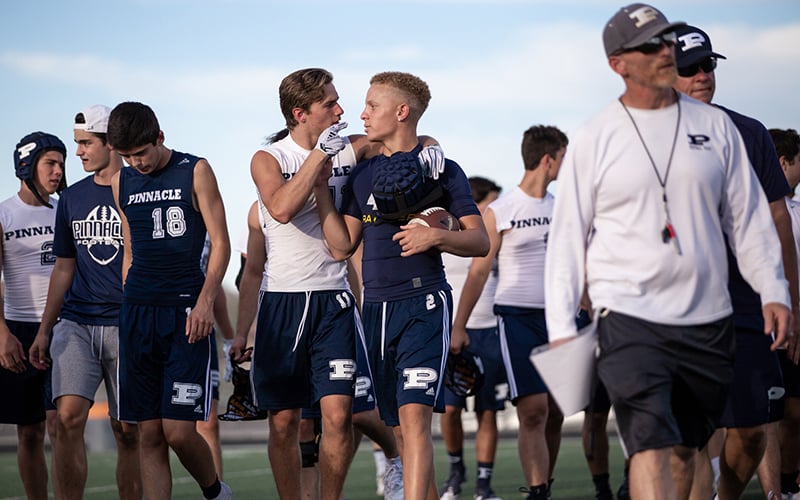 Pinnacle High School is one of the schools that could be part of football’s new Open Division. (Photo by Ellen O’Brien/Cronkite News)

PHOENIX – If California’s experience is any indication, skeptics will quickly warm up to the Arizona Interscholastic Association’s recent decision to add an Open Division to the football postseason.

On Jan. 22, the AIA Executive Board unanimously passed a motion to create an eight-team playoff for the 2019 football season that will pull the top teams from the state’s biggest conferences: the 6A, 5A and 4A. Teams not selected will still compete for a conference championship.

The California Interscholastic Federation made a similar move in 2008.

“It has become much more acceptable and prestigious than when it first started. It means you’re one of the best teams,” said Eric Sondheimer, prep sports columnist for the Los Angeles Times.
The AIA’s decision was motivated by a desire to name one true state champion, but also to find the best path to award that title. The eight teams selected will be determined based on a computer formula.

California’s Open division was created “so that schools would be seeded into the state championship brackets based on competitive equity,” instead of enrollment-based seeding, said Rebecca Brutlag, the CIF’s director of media relations.

“We are expecting three great rounds of football because it should at the very least be most of the best teams in Arizona. … The open division next year will create a more competitive conference championships,” said AIA assistant executive director Jake Paddock.

The playoff will be in a traditional bracket formula with the highest seeds playing the lowest seeds until a champion is crowned. The title game will be played at Arizona State’s Sun Devil Stadium.

With a standout season last year, Saguaro High School may find themselves in the playoffs for the Open Division. (Photo by Jamie Nish/ Cronkite News)

Teams that would like to replicate the success they had last season and get in the Open Division include Chandler, Pinnacle, Centennial, Saguaro, South Pointe, Highland, Liberty and Williams Field.

Paddock said that “what a team will want to do is try to play other teams that are very competitive and beat those teams. Playing a team better than you will help you in the ratings. There are some examples that a loss to a much higher ranked team actually doesn’t hurt your rating it can help your rating. More competitive schedules will boost your rating.”

Early feedback about the decision has been positive from some of the state’s top football programs.

“I am excited about it,” said Highland football coach Brock Farrel, whose team went 11-2 last season. “Who would not like to compete on the field to see who is the best.

“Overall, it is probably good for Arizona football because you have more teams and therefore more players in the playoffs. Only time will tell if it brings a little more parity to the state.”
The feedback the AIA received was mostly excitement, Paddock said, but he also heard from coach who were a “little bit concerned because ‘is their schedule strong enough to get them into the open division?’”

Paddock also noted that “the 6A and 5A simply identify the top-rated schools so you might win the region in the 5A or 6A but that doesn’t guarantee you a berth into the playoffs. Conference placement and region placement doesn’t matter. That’s really important for everyone to understand it’s whatever your rating is at the end of the 10 games.”

The high school football season kicks off in August.