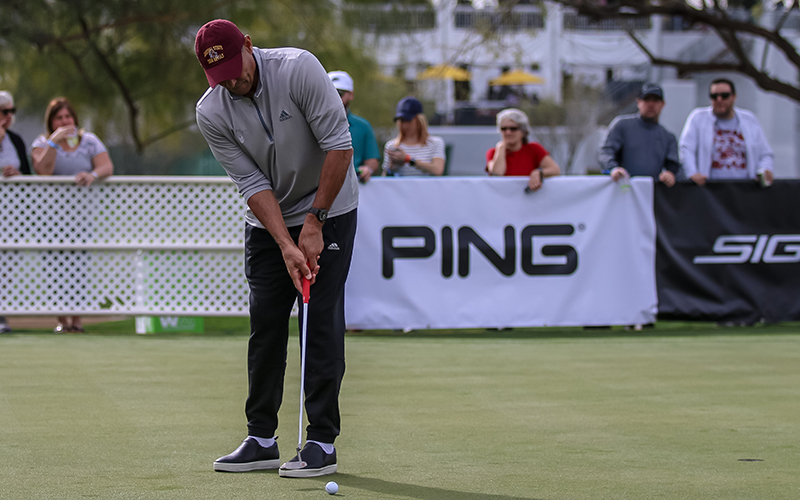 SCOTTSDALE – Local and national celebrities were out in full force at the Waste Management Phoenix Open Annexus Pro-Am on Wednesday.

Although the tournament didn’t start until Thursday, the star-studded Pro-Am annually kicks off the party that is the WMPO. Although the weekend attracts the largest crowds, the Wednesday pro-am pulls in a good turnout, too.

Among those playing was Archie Bradley, relief pitcher for the Diamondbacks, who has participated in the WMPO pro-am the past three years with his dad, Charles, serving as his caddie.

“This is our third year in a row doing this tournament and we’ve kind of made it a staple,” Archie said. “For a father and son, I don’t think it gets much better than this day.”

One of the biggest stars of the show, however, was Arizona State’s very own Phil Mickelson. At any given time, the PGA standout was surrounded by security guards protecting him from a swarm of fans. Whenever he passed the ropes on his way to the next hole, dozens of people yelled his name, asked for an autograph or just hoped for a glance in their direction. Once he was able to find the time, Mickelson stepped aside to give fans his full attention.

Mickelson was grouped with fellow pro Matt Kuchar along with various amateurs including Owen, who is no stranger to the Open. A WMPO regular, Owen was a headliner for The Coors Light Birds Nest in 2017 and is returning to the stage Thursday night. He will be the first person in tournament history to both perform and participate in this event.

Many of the big-name celebrities again this year were elite baseball players.

Bradley and his dad were decked out in matching, bright Hawaiian button-ups, each sporting a very similar and very impressive beard. Archie did have one distinction from his father in the form of one gold Nike swoosh earring in his left ear.

“I taught him everything he knows,” Charles Bradley said.

Arizona Diamondback relief pitcher Yoshihisa Hirano waves to the crowd after landing his tee shot within 5 feet of the hole on 16. Hirano would tap in for birdie. (Photo by John Mendoza/ Cronkite News)

Another fan favorite was Verlander, who started loving the game of golf right after he was drafted in 2004.

“I try to have fun. It’s a nice change of pace for me, but I usually get pretty competitive as well,” Verlander said. “I like coming out here and putting my phone in my golf bag and just forgetting about the rest of the world and just having fun with whoever I’m playing with.”

Chicago Cubs first baseman Anthony Rizzo, a three-time All-Star, also was swinging a club, although he says his baseball swing is much better than his golf one.

“The golf swing is still a work in progress,” Rizzo said. “Honestly, it’s just fun for me. I just come out and have a good time. I don’t really get caught up if I have a bad shot. Whenever I’m out on the golf course it’s usually a good sign because that means I get to come out and enjoy the day.”

When asked how glad he was to not be in Chicago this week as the city deals with sub-zero temperatures, Rizzo and the crowd surrounding him laughed.

“Oh my gosh,” he said. “It almost would be fun to be there to see what it’s like for the experience, but I don’t know how I’d do it.”

Another MLB legend in attendance was Hall-of-Famer Maddux, a four-time Cy Young award winner. He made it clear that golf is just another hobby for him.

“I play golf because I enjoy the game,” he said. “I had enough competition in my life. Now I’d like to kick back and enjoy retirement, enjoy the game for what it is.”

A good time is what Wednesday’s Pro-Am was all about for both the fans and players.