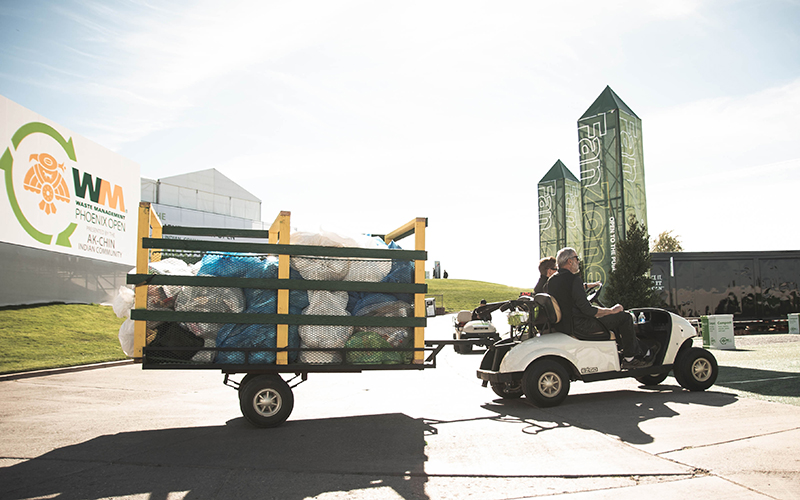 According to Janette Micelli, external/corporate communications manager for the Waste Management open, a team of over 300 help transport and organize trash ensuring a “zero waste” tournament. (Photo by Tyler Rittenhouse/Cronkite News) 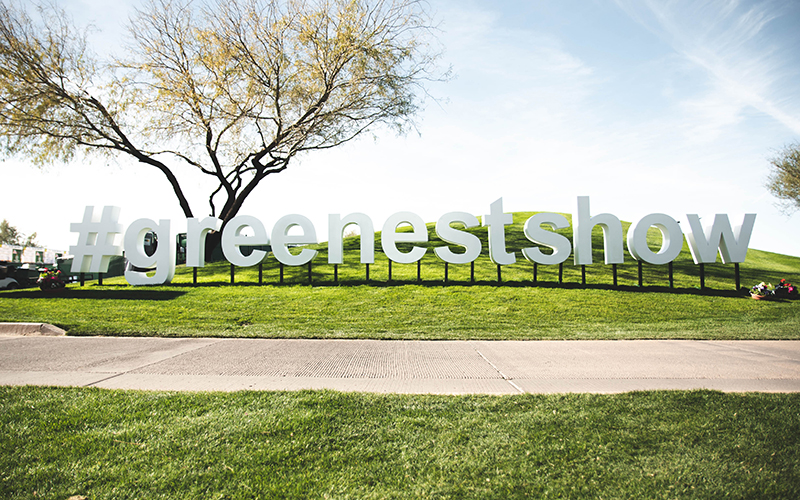 Dubbed “the greenest show on grass,” the Waste Management Open is proud to be known as a “zero waste” golf tournament. (Photo by Tyler Rittenhouse/Cronkite News) 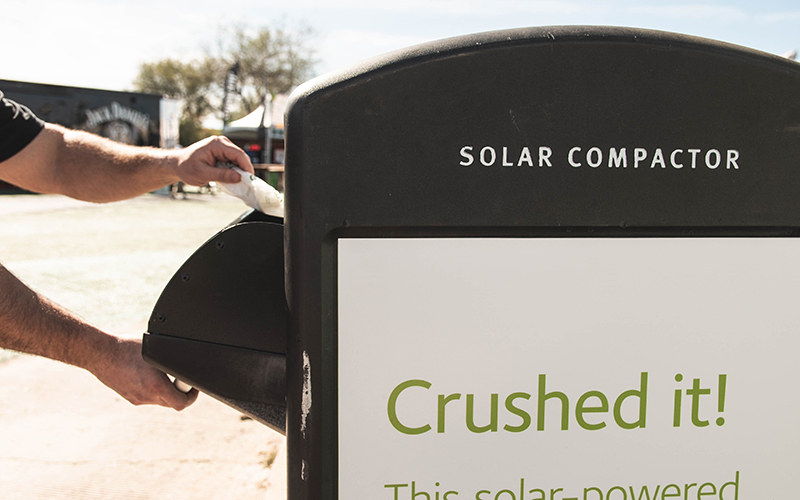 Multiple Solar Compactors have been placed in various spots of TPC Scottsdale. Compactors are utilized for larger, more dense trash than a typical water bottle. (Photo by Tyler Rittenhouse/Cronkite News)

SCOTTSDALE – Staging an event of any size that aims to reduce waste is a challenge. Organizing one of sport’s biggest spectator events while producing zero waste takes a whole different level of creativity.

The Waste Management Phoenix Open launched its Zero-Waste Challenge in 2012, and since 2013 the PGA Tour event at TPC Scottsdale’s Stadium Course has managed to divert 100 percent of all tournament waste away from landfills.

Instead, tons of water bottles, paper plates, beer cans, food and other waste generated by the more than 700,000 fans who attend the PGA Tour event each year have been repurposed, recycled, composted, turned into energy or donated. 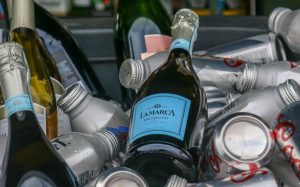 The effort has made the WMPO the largest zero-waste event in the world, according to the sponsoring Phoenix Thunderbirds and Waste Management, the waste collection and environmental management company in its 10th year as the tournament’s primary sponsor. Tournament and Waste Management officials announced this week that they have extended their agreement through 2030.

However, as the tournament’s galleries, which already are the largest on the PGA Tour, continue to grow, so does the sustainability challenge. That’s where the creativity comes in.

This year, the tournament popped the cork on a new initiative that aims to repurpose the thousands of empty wine bottles left behind by golf fans throughout the tournament’s suites and hospitality areas.

Refresh Glass, a Phoenix-based company that gathers empty wine bottles from hotels, restaurants and resorts and then recycles the glass to create home décor items and glassware, is partnering with the tournament this year. Refresh Glass has a goal of repurposing 10 million wine bottles annually.

Waste Management spokesman Rob Myers said Refresh Glass owner Ray DelMuro is arranging to gather empty wine bottles and broken glass from the tournament, transporting it to Refresh Glass and using it to make glassware and other items such as decorative candleholders.

“After that, he brings the items back to the tournament over the weekend to resell,” Myers said. “It’s really about closing that recycling loop.”

Part of Waste Management’s goal at the golf tournament is to educate those who attend about the value of recycling and composting waste.

“That’s what we do out here,” said Janette Micelli, corporate communications director for Waste Management. “How can we creatively tell the story, and then how can we have fun with it?”

The stations are repurposed trash dumpsters transformed into colorful kiosks, each with an interactive game that teaches attendees how to recycle and compost.

“I learned that utensils are compostable,” said Jennifer Villalobos, a golf spectator who visited a Zero Waste Station. “I would think that the plastic in them is recycled.”

So Villalobos, who is trying to live “green” wherever possible, learned something.

“I like to have a bag where I put my recyclables, and a bag to put my trash in,” she said. “That’s something I’m always working on at home to make sure I’m helping the earth and giving back to the community.

“I’m learning new things, like maybe I shouldn’t put my utensils in the recycle bin anymore. And I think that’s kind of cool.”

The Zero Waste Station closest to the tournament entrance includes an educational water feature, new this year, to teach fans the importance of conserving water. To set an example, the tournament collects and reuses all grey water from the event’s food stands and bars, directing it to portable toilets.

There are no “trash” receptacles at the tournament. Instead, they are clearly labeled for recycling or composting, and there are plenty throughout the 18-hole layout.

Also, materials that are brought on site must be locally reused, recycled, or composted. Each vendor must sign a contract that requires them to use plates, napkins, and utensils that meet recycling requirements, reducing the amount of food-service waste.

“We just hope people do the right thing, as you would anywhere,” Micelli said. “We’re trying to inspire people to recycle more and to make sure their recycling is clean. You may not do zero waste at your home, but what can you do to think green?”

While achieving zero waste is the goal, there are some days during the tournament that are more challenging than others. Friday and Saturday crowds at the WMPO are renowned for their size and rowdiness. There’s only so much tournament staff and volunteers can do to limit litter. But with roughly nine waste receptacles within view from just about anywhere on the course, they are able to manage.

Lee Spivak, senior associate of Waste Management sustainability services, said the ultimate goal is to encourage and educate those who attend the tournament to make an environmental difference in their day-to-day lives.

“It’s really great to do what we can here, but then everyone leaves here and goes back to their homes and businesses,” Spivak said. “If we can affect change in that sense, it really takes the event and grows the impact in a positive way.”

Spivak believes that with creativity and education, fans will buy in.

” It doesn’t work as well when you try to force it.”