As migrants fled from Central American countries rife with conflict during the 1980s, the Southside Presbyterian Church in Tucson launched the modern-day sanctuary movement when it began sheltering migrants seeking asylum in the United States. (Photo by Julian Hernandez/Cronkite News)

TUCSON – Tucson has been at the forefront of the sanctuary movement since the early 1980s, when organizers at the Southside Presbyterian Church began providing refuge for asylum-seekers fleeing civil conflict in Central America.

But Tucson has never officially declared itself a sanctuary city, as San Francisco did in 1989, becoming the first municipality to protect undocumented immigrants from deportation or prosecution, despite federal immigration law.

In December 2016, after decades of different policies limiting the cooperation between Tucson and federal law enforcement agencies, the mayor and city council unanimously passed a resolution declaring Tucson an “Immigrant Welcoming City,” recognizing the need to protect and serve the city’s immigrant communities.

Now a petition to declare Tucson a sanctuary city is being circulated for signatures, and if it becomes city code, it could conflict with the last vestige of Arizona’s infamous SB 1070 – the so-called “show me your papers” law.

Zaira Livier, the executive director of the People’s Defense Initiative, a Tucson nonprofit that defends the civil rights of immigrant and marginalized communities, filed the petition Dec. 4. 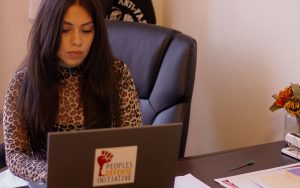 “Arizonans have had enough of this fearful and hate-based rhetoric,” said Zaira Livier, who leads the People’s Defense Initiative, a grassroots immigrant and civil rights organization spearheading the push to make Tucson an official sanctuary city. (Photo by Julian Hernandez/Cronkite News)

Livier said the initiative was a common sense first step in getting Tucson to become “a place where everyone can thrive.”

Her work with the People’s Defense Initiative was born out of her own history as an undocumented immigrant.

Livier grew up in Tucson with her mother and brother before eventually gaining residency. But last June, Livier’s brother, who had been deported many years before, was killed in Mexico. Livier said the fear of what can happen to a family member who is deported is unbearable for many.

“That is why this initiative is so important, not just me, but for my team and for the Tucson community at large.”

The petition is still in its early stages of collecting the 9,241 signatures required by July 5 to be submitted to the mayor or City Council for adoption, or to call a special election and be submitted to voters in November.

But a potential challenge to the proposed amendments to the Tucson city code arose when city attorney Mike G. Rankin filed a memo Jan. 16 outlining what he sees as potential conflicts with Arizona state law and the possible legal and operational actions that could be taken against Tucson if the proposed ordinances pass.

Section 41-194.01 of the Arizona Revised Statute requires the state attorney general to investigate whether any ordinance adopted by a city violates state law if any member of the Legislature requests an investigation. That would allow the proposed amendments on the petition to remain open to investigation.

If the ordinance adopted by Tucson is found to be in violation of state law or the Arizona constitution, the attorney general would be required to file a lawsuit in the Arizona Supreme Court.

State Rep. John Kavanagh, R-Fountain Hills, was one of the prime sponsors of the law granting legislators investigative powers. Kavanagh said if the proposed amendments become city code, the ordinance “would be illegal on its face” and he would make a request to the attorney general to investigate.

Billy Peard, a staff attorney with the American Civil Liberties Union of Arizona who was part of the legal team that drafted the proposed amendments in the Tucson Families Free and Together initiative, said of Rankin’s analysis, “we simply have a disagreement on the legal interpretations.” 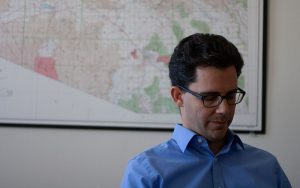 Despite early challenges to the legality of the amendments proposed in the “Tucson Families Free and Together” petition, Billy Peard of the ACLU of Arizona is confident the initiative will gather enough signatures and get passed by voters in November. (Photo by Julian Hernandez/Cronkite News)

Peard said he’s willing to discuss the concerns Rankin outlined, but he and his team are confident the proposed ordinance does not violate state or federal law, adding that it couldn’t be modeled after sanctuary laws in other states.

“The ordinance proposal that we’re talking about in Tucson was really custom-crafted because of the legal situation we have here in Arizona with regard to SB 1070 and other measures,” Peard said.

SB 1070 was a Senate bill first introduced in January 2010 and signed into law by then Gov. Jan Brewer in April that year. Among the many provisions in SB 1070 was the controversial Section 2(B) that required local law enforcement officers to check the immigration status of a person they encountered in a lawful stop if they had reason to believe that person was in the country illegally.

The Department of Justice eventually sued Arizona challenging the constitutionality of the law. In 2012, in the case United States of America v. Arizona, the Supreme Court struck down some sections, but upheld Section 2(B).

Josh Nuñez, a Phoenix attorney who specializes in immigration law, said he does believe there is a “cause for concern with the initiative.”

“However, I think that the way that the initiative is written is very crafty. It’s written in a very smart manner that I think allows for the possibility that if the people of Tucson vote in favor of initiative, then it might stand a constitutional challenge,” he said.

Whether the provisions are in direct conflict with Section 2(B) will be one of the major decisions to be made if a court challenge is filed against the provisions, Nuñez added.

After many years of litigation with civil rights groups, and concerns raised by activists over the widespread use of racial profiling in conjunction with SB 1070, Arizona Attorney General Mark Brnovich issued a guidance on Sept. 15, 2016, as part of a settlement after the Supreme Court ruling, as to how state and local law enforcement agencies can carry out the duties of the section without violating anyone’s civil rights.

One of the more consequential challenges Rankin outlined in his memo pertain to the provisions in the initiative that center on Section 2(B) of SB 1070.

Section 17-82(d) of the initiative states that “an officer shall not participate in any law enforcement activity, investigation, or enforcement action, the purpose of which is to determine a person’s immigration status.”

Rankin states in his memo he believes that section of the initiative is in direct conflict with A.R.S. Section 11-1051, which requires a law enforcement officer to make a reasonable attempt to determine the immigration status of the person in certain situations.

Peard said, “The purpose of local police is to ferret out crime, is to identify, detect, investigate local crime and traffic offenses. Immigration status is not a crime per se, it’s a civil offense under federal law, outside the purview of what local officers ought to be doing.”

The proposed amendments do not prevent officers from doing the minimum required under current state law, he said.

Pratheepan Gulasekaram, a law professor at Santa Clara University School of Law in California, is an expert on immigration law and how state and local immigration regulations interact with each other and federal law.

In an email, Gulasekaram said his understanding of the settlement and the guidance issued by Brnovich suggests that Arizona officers can’t be required to ascertain immigration status.

Gulasekaram thinks Rankin’s argument against Section 17-82(d) of the Tucson Families Free and Together initiative centers on the interpretation that “the possibility or opportunity for asking about immigration status under certain, limited circumstances has to remain open and left to the discretion of the police officer.”
Therefore, any city ordinance that prevents that possibility or opportunity could then be seen as in direct conflict with Section 2(B) of SB 1070.

Gulasekaram wrote that an argument can be made that once Section 2(B) was made discretionary, a police department or city could issue an order to all of its officers to not ask about immigration status.

In determining whether there is a conflict between city code and what remains of SB 1070, he said, it will come down to how Brnovich interprets SB 1070.

Nuñez said, “Obviously, any legal guidance has to do with interpretation and if the attorney general weighs in on what he meant when he said what he said, and when they reached the agreement, obviously there will be some bearing there. However, you cannot down the road try to reinterpret what you’ve written several years ago in a settlement.

“If anything, this is going to end up in litigation, obviously. There is going to be a lawsuit and we’ll see what the courts decide.”