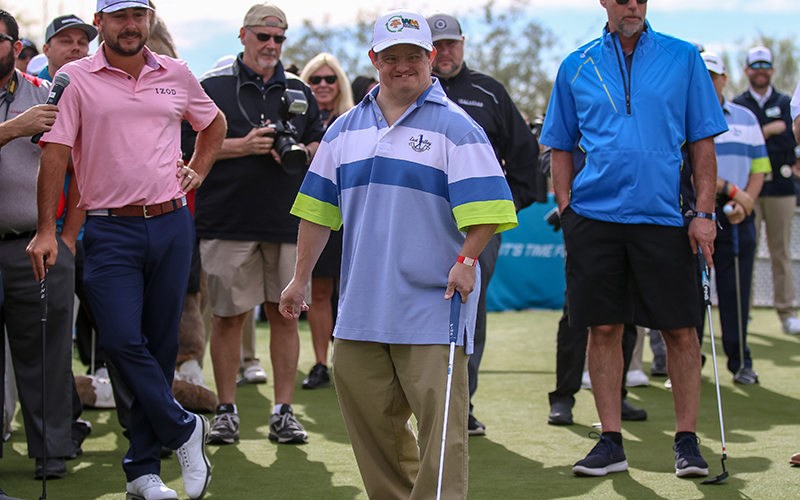 The event was one of several held before competition starts Thursday in the Waste Management Phoenix Open. The athletes are affiliated with Special Olympics Arizona, which helps individuals with intellectual disabilities find their own path to empowerment.

“It’s so fun, the Special Olympians, they’re awesome and it’s awesome to see their families out here supporting them,” said Tim Hovik, owner of San Tan Ford, who made a $55,000 donation to Special Olympics Arizona at the end of the event.

“I think if you’re going to be a business in this community you’ve got a responsibility. You can’t just ask people to do business with you.”

High-fives and hugs were commonplace. Twelve Special Olympians teamed up with 24 local athletes and celebrities and even a few mascots of local teams as they took on the six-hole course surrounded by friends, family and tournament-goers.

“Getting these kids out here and being able to putt and have fun with a lot of special people is super awesome,” said the St. Louis Cardinals’ Nolan Gorman, who was drafted out of Sandra Day O’Connor High School last June in the first round.

Gorman was joined by other local athletes, including Arizona Diamondbacks pitcher Archie Bradley and the Arizona Coyotes center Clayton Keller.

“Any time you can put a smile on someone’s face it’s a special feeling and any time you get the opportunity to do it, it’s a must for me,” said Keller, fresh off his first NHL All-Star Game. “It’s awesome that it worked out. I had a couple days to come out here and give back to the community, have a lot of fun and put a smile on these kids faces.”

Hovic, will also be playing in the Pro-Am on Wednesday but says the Special Olympics Open is his favorite event.

“This is a special day,” he said. “I’ve had family members tell me their participant started practicing the day after it ended last year for this year, so it’s a great day.”