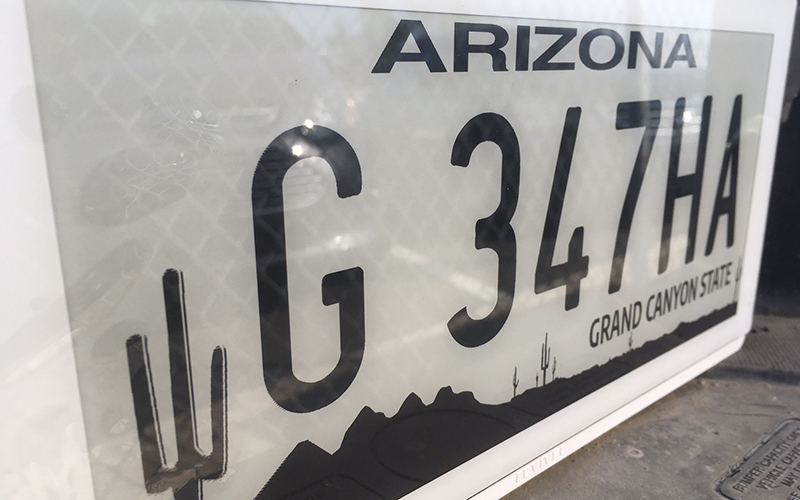 Digital license plates have been approved for use by the Arizona Department of Transportation, which tested the plates last year in rain, sun and ice. (Photo courtesy of ADOT)

PHOENIX – What if your car could alert police when it’s stolen?

That’s just one of the benefits of having a digital license plate. Reviver Auto first started selling the plates in California, and with the Arizona Department of Transportation’s recent approval, Arizonans can now give their bumpers a high-tech message board.

“Arizona is the second state to do this, so we are very much on the cutting edge,” ADOT spokesman Doug Nick said.

The standard Rplate can be preordered for $500; the Rplate Pro costs $800. There also is a $99 a year subscription fee after the first year. ADOT will not receive any of the proceeds, but those costs do not include the annual license fees owners must pay to the state’s Motor Vehicle Division.

Reviver Auto installs the digital plate and connects it to the car’s battery. Both versions include LTE wireless connection, a backlit black-and-white HD display and allow for plate customization and personal messages, but the Rplate Pro includes advanced telematics that make it possible to pinpoint a car’s location and create trip maps, according to Reviver Auto.

The digital plates also have implications for law enforcement. They can display a message such as “STOLEN,” for example.

“Obviously, law enforcement is going to be able to use that very easily as a tool to find a stolen vehicle,” Nick said. “Or if it is invalid, their registration needs to be renewed, that is something law enforcement is also interested in.”

ADOT tested the plates last year on a fleet of maintenance vehicles in different climates around the state.

“We wanted to see how they do to sun exposure, to heat, to cold, to ice, rain, everything that motorists in Arizona encounter, we put these plates through and the current iteration that is being authorized to be sold by Reviver is one that is robust enough to handle those things,” Nick said.

The California company expects their digital license plates to be approved this year by Texas and Florida, which have pilot programs to test the plates. It also is working to get license renewals handled electronically through the plates.

The digital plates can be purchased online from Reviver Auto directly or from participating retailers.

CORRECTION: A previous version of this story misidentified the Motor Vehicle Division of the Arizona Department of Transportation.