Arizona businesses that need workers have been hampered over the past month by the government shutdown, which meant the E-Verify citizenship check system was put on hold. State law requires use of E-Verify to make a hire, which has left businesses to roll the dice on new hires. (Photo by Matt Wetzler/Creative Commons)

WASHINGTON – For the past five weeks, the government shutdown has presented an uncomfortable choice to Arizona businesses that are required to use the shuttered federal E-Verify system to check the citizenship status of new hires.

Don’t hire the workers they need and wait for the government to reopen. Or roll the dice and make the hires hoping that, once government reopens, all their new employees check out when they are run through the revived E-Verify system.

A tentative deal to temporarily reopen the government was unveiled Friday, but for the five weeks until then experts say businesses have had little choice but to roll the dice and make the hire.

E-Verify is a federal service that takes information from an employee’s I-9 – the U.S. Citizenship and Immigration Services paper form used to determine a person’s work eligibility – and compares it to Department of Homeland Security and Social Security Administration records to prove an applicant’s citizenship.

Arizona is one of a handful of states that require employers to use E-Verify for all new hires, or face the possibility of criminal prosecution.

A spokeswoman for Attorney General Mark Brnovich would not speculate on the possibility of prosecutions for hiring during the E-Verify hiatus. Katie Connor said in an email only that the attorney general’s office and “county attorneys and other law enforcement agencies, are charged with investigating complaints that an employer has knowingly employed an unauthorized alien.”

Bohr said she thinks prosecutions are unlikely, noting that the government “expects and understands” that employers are not using the service during the shutdown.

That was echoed by Julie Pace, an immigration and employment law attorney with the Cavanaugh law firm, who said, “I don’t see the state prosecuting,” businesses that are hiring right now.

Not using E-Verify is hardly unusual even when the system is operating, said David Bier, an immigration policy analyst for the Cato Institute. 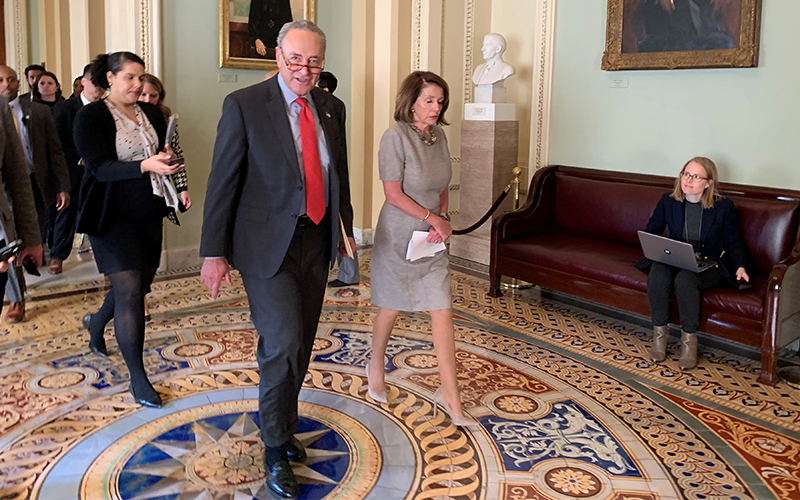 Bier said that only about 60 percent of new hires are run through E-Verify in states that mandate the system, like Arizona. Even if everyone complied with the mandate, around 50 percent of unauthorized workers have found ways to pass the E-Verify check, Bier said, using other people’s Social Security numbers, for example.

The industries most likely to be affected by the E-Verify shutdown are those that hire large numbers of immigrant workers: restaurants, construction, farming and service jobs. Calls to representatives of those industries were not returned, but business and union officials say they have seen little lag in hiring in recent weeks.

“At this time, we have not heard from any of our businesses on this issue,” said Janelle Tassett, a vice president of program development and marketing for the Greater Phoenix Chamber of Commerce.

Unite Here, the union representing service industry workers, said it has not seen specific issues arise because of E-Verify being down – even though the union is “not fans of E-Verify,” said Andrew Cohen, a spokesman for the union’s Southwest locals.

“It’s a way to make immigrant workers more vulnerable,” Cohen said. “It strips their ability to speak up for themselves.”

Bohr said she believes employers who hired during the shutdown will have to run those new employees through E-Verify once the shutdown ends. If that retroactive check turns up ineligible workers, they would have to be fired and the employer would have to start the job search anew.

Bier said that could mean a big hit to employers in those industries who hire large numbers of immigrant workers. While the actual numbers of workers may be small, the impact could be “substantial for a limited number of employers” who spent the time and money to train those workers and would be forced to start over.

“You really integrated these hires,” Bier said. “And if you were delaying hiring, that’s not an option anymore.”

Pace said the potential problems only grew as the shutdown continued. With the current labor shortage, there’s a lot of hiring going on right now, she said.

“The longer it goes, the less likely employers will apply it,” Pace said. “It’s difficult to backtrack that far and fix those problems.”

Pace and Bohr both said that as long as employers continue to use the I-9 form, the less likely they will run into problems once the E-Verify system is functioning.

Pace, who thinks the system should become mandatory nationwide, finds it ironic that the government shutdown sparked by a fight over border wall funding that wound up shutting down the “electronic wall” she thinks is at least as effective as an actual wall.

“It is ironic that this was not funded,” Pace said. “Shut down the electronic ‘wall,’ while trying to fund the real wall.”

Bier said he is not particularly impressed by either.

“The E-Verify mandate is ineffective, and a border barrier wouldn’t be much more effective,” he said.