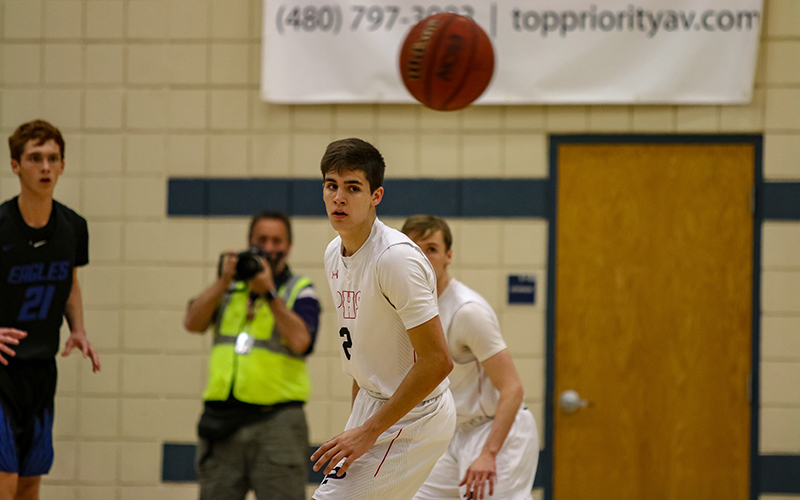 Pinnacle guard Trent Brown averages 20.1 points per game for the top-ranked team in the state, but most of the attention goes to 5-star recruit and Arizona commit Nico Mannion. (Photo by John Mendoza/Cronkite News) 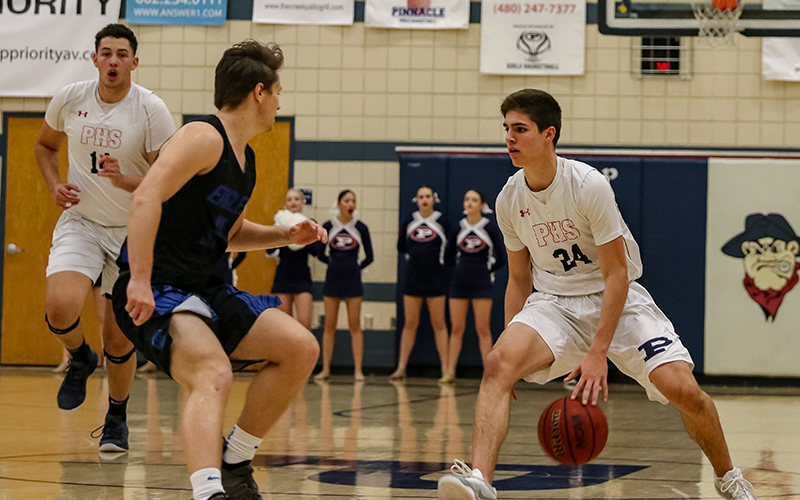 PHOENIX – Many think “Nico Mannion” when the discussion turns to Pinnacle High School basketball. Now they are thinking “Trent Brown,” too.

Pinnacle won the 6A state championship last year, and with Mannion and Brown leading the way, the top-ranked Pioneers appear ready to defend their title when the state playoffs begin in February.

Although Mannion, who has committed to the University of Arizona, still grabs the most headlines, point guard Brown is drawing more and more attention with his play.

He has four games this season with 30 points or more. His scored a career high of 42 earlier this month when he hit 10 3-pointers against Liberty and is averaging 20.1 points per game.

Pinnacle coach Charlie Wilde said Brown should reach his goal of being a Division 1 basketball player.

“He’s got four or five offers already,” Wilde said. “A couple schools because he’s really done well the last couple of weeks have now started coming around and talking to him and calling him. One just asked for his transcripts this morning.”

“Trent is a coaches dream,” said Wilde, who has a 351-168 record in his 18 seasons at Pinnacle. “He’s been here for four years. Does everything you want him to do. He’s like an extension of the coaching staff whether he’s in practice or he’s out playing in the game.

“He understands the game, has high intelligence of basketball and works hard every day. So he’s just one of those coachable kids every coach would love to have in their program for four years.

“The thing we love about him basketball-wise is he will do whatever you need him to do to win a game: take a charge, dive on the floor, he hits threes for you, passes the ball. We love that about him.”

Although Mannion is regarded by many as one of the top high school players in the country and attracts significant attention, Brown enjoys playing with him.

“Nico has been great to play with,” Brown said. “He really has a level head on his shoulders and, honestly, he does look for his teammates. He needs support sometimes as well. He is a great player, always trying to look for an extra pass and he is not all about himself, which is pretty rare in the elite world he has been in.”

Mannion is averaging 29 points per game, but also 6.3 assists and 5.9 rebounds. He makes it a priority to get others involved.

“He makes it really easy on me,’’ Mannion said. “He spaces the floor, shoots really well, broke the record this year for threes. He’s easy to play with. He’s a smart player. He can do pretty much everything.”

Mannion and Brown have been friends since seventh grade.

“We’ve been playing together since then,” Mannion said, “so we kind of know what we like to do on and off the floor. Off the floor we are really close so it makes it even better for us on the floor.”

Brown does not model his game after any one player but said “there are certain elements to everyone’s game.”

“I like the way (Golden State’s) Klay Thompson sets and shoots. I like the way (Portland’s) Damian Lillard attacks the basket. I’m not as athletic, of course, but I try to emulate my game after him and the way he attacks the game.”

Family drew him to basketball.

“It’s really been like a family affair for me,” he said. “My dad played basketball. His two brothers and my dad’s dad. It’s kind of just a family thing. … My dad he has taught me everything I know about the game. He was my coach growing up. He’s always been there for me, so he’s definitely been my best role model.”

“My most memorable moment was winning the state championship last year with a lot of people I grew up with. It was pretty surreal to win it with them,” said Brown, who missed about half of that season because of a back injury.

“I had to come back, find my role and place on the team last year without messing up what they had been doing. They were extremely successful without me. All I wanted to do is come in and help to finish out the season and we were able to do it.”