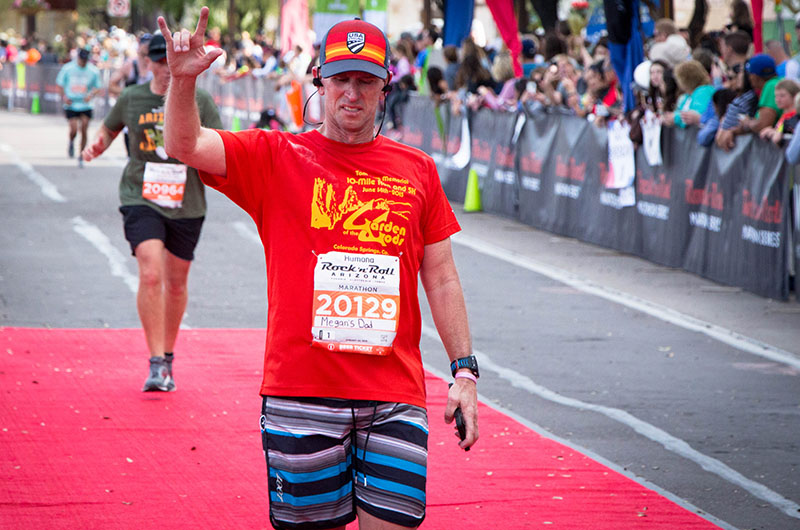 Neal Oseland, running across the finish line with the words “Megan’s Dad” on his bib, was motivated to run the Rock ‘n’ Roll Arizona Marathon because of his daughter’s perseverance after suffering a stroke. (Photo by Josh Shure/Cronkite News)

TEMPE – With the tribute “Megan’s Dad” written across his racing bib number, Neal Oseland was struck by a wave of emotion as he crossed the finish line of the Rock ‘n’ Roll Arizona Marathon in Tempe.

The moment was a culmination of nearly a year of uncertainty for the Oseland family after Neal’s daughter Megan suffered an unexpected and life-threatening stroke. She was only 13.

The courage she showed in her fight to survive inspired Neal to jump back into marathon running to honor Megan.

Despite brain surgery, a bout of bacterial meningitis and a stroke all before the age of 14, Oseland said Megan “rolls out of bed every morning” with a smile.

It’s from that smile that he draws inspiration.

“She is someone who people want to be around,” he said. “People flock to her. She is easy to be around. She’s fun. I always know there won’t be a single day that goes by that Megan won’t smile at me and tell me that she loves me.”

However, there was a time in February of 2018 when Oseland wasn’t sure he would see that smile again.

Megan was at dance practice when she phoned her mom complaining of a headache. Shortly after that, she was in the back of an ambulance.

Neal was at home when he heard the news that his daughter was unresponsive and being rushed to a hospital close to their home in Colorado Springs, Colorado.

Despite facing any parent’s nightmare, he knew he had to keep his emotions in check and stay strong, especially for his youngest son.

“I had to put on a brave face for my son on the drive down there, and he and I prayed on the way there,” he said. “I was just holding back tears because I don’t want to freak my son out because his favorite person in the world is his older sister.” 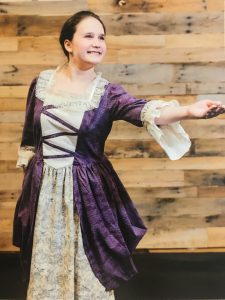 Megan Oseland, 14, suffered a stroke in February of 2018 and is now recovering. (Photo courtesy of Neal Oseland)

He said he remembers walking into the hospital room and seeing Megan on a bed attached to machines. He had no idea what had caused her collapse.

“I went in to see Megan who was strapped down to a million different machines and nobody had any idea what was going on with her,” he said. “We were just praying to give us an answer and something to act on.”

Neal said during that time of uncertainty, support from others helped the Oseland family keep a positive attitude.

“We had our pastor and friends with us that first night, praying with us when we weren’t with Megan,” he said. “My wife was a mess, and I was trying to be as strong as I could and I had some strong men around me that were helping me there. Just trying to stay strong for my wife and we barely held it together.”

When the test results came in, they found Megan suffered from arteriovenous malformation (AVM), a tangled group of blood vessels that had ruptured in her brain and caused her stroke.

Ruth E. Bristol, M.D. a pediatric neurosurgeon at Phoenix Children’s Hospital, said people born with AVM normally don’t know they have it until they reach adulthood.

“AVM’s are what we consider congenital lesions, although a lot of people don’t know that until later in life,” Bristol said. “So we actually don’t see a whole lot of them in the pediatric age group. It tends to be sort of a more adult problem.”

Oseland said the first 48 hours after Megan was hospitalized were the hardest moments he has ever had to live through.

But Megan kept fighting to survive.

“That was when, for the first time in her life, I just broke down and couldn’t hold it together anymore because there was a chance she could die,” he said. “In those 48 hours, we couldn’t do anything because we knew that any moment could be her last moment. But she just fought and fought and made it through.”

Megan, despite her young age, has gone through many obstacles in her life. The happiness she shows every day is inspiring to everyone around her, Neal said.

After seeing what Megan has gone through since that day in February, he wanted to celebrate his daughter. A triathlete and runner, Oseland decided that running in the Rock ‘n’ Roll Arizona Marathon was his best way to do it.

“I wanted to celebrate Megan somehow, and we have done stuff together … and I was thinking of all the different ways to celebrate her,” Oseland said. “The best way I know how, with my background in endurance sports, is to come out and do something outside of my comfort zone and run a marathon.”

He said he hadn’t run a marathon in a couple years and it scared him, but Megan has been scared, too, and she overcame it.

“The reality is, it puts fear in me. This event intimidates me,” he said before he ran.

“She’s been in fear. She’s been scared. She’s dealt with all these things as a result of the stroke,” he said. “Yet, she soldiers on and doesn’t let it get her down.”

Megan said she has come a long way since her stroke and continues to see improvement.

After the stroke, she was unable to move her left side. Now she can.

“Every day, things get a little bit easier,” she said. “There are still struggles for me, day-to-day, like balance when I am dancing, but I practice and it gets better every day.”

Megan hopes to use her story as a way to inspire others and let them know that their life will get better, too.

“I just really want to be able to bring inspiration to kids who are maybe going through the same thing or cancer or something that they can fight because they are going to get through it,” she said.

Megan added that she is proud that she could inspire her dad to do something that was difficult for him.

“I am so proud of him for doing this and I love him so much,” she said. “I am so touched that he did this for me.”