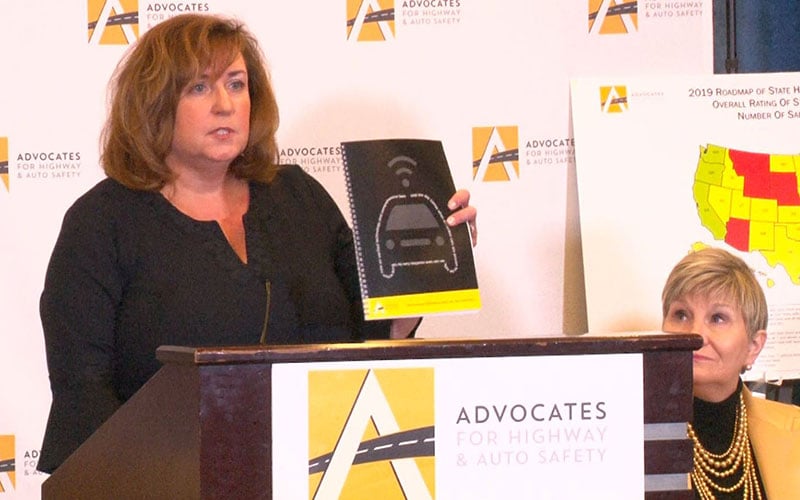 Cathy Chase, president of Advocates for Highway and Auto Safety, said states are “mired in mediocrity” when it comes to adopting highway-safety laws, and Arizona is one of the worst. (Photo by Alyssa Klink/Cronkite News)

WASHINGTON – Arizona continues to be rated of one of the worst states in the nation for its highway safety laws, falling among those states that are “dangerously behind in adoption of … optimal laws,” a report said Tuesday.

But one state official dismissed the report by Advocates for Highway and Auto Safety, saying the organization has been “attacking” the state for years in its rankings and that it overlooks the good the state is doing in other areas of highway safety.

“They only look at the big picture, they don’t look at the individual things Arizona has done,” said Alberto Gutier, director of the Governor’s Office of Highway Safety. “Those people have been attacking us for years and years.”

The 2019 Roadmap of State Highway Safety Laws gives each state a rating, from green to yellow to red, for its adoption of 16 laws the Advocates’ report deems “essential.”

Arizona and 10 other states got the lowest rating, red. Six states and the District of Columbia got green ratings and the other 33 got yellow.

But Arizona, with only four of the recommended 16 laws, was tied for third-lowest among states. Only South Dakota and Wyoming had fewer, while Missouri and Montana had four of the laws, tied with Arizona.

No state had all 16 laws in place. Rhode Island is closest with 13 of the laws on the books.

“Right now we are mired in mediocrity when we could be boasting about bold leadership,” said Cathy Chase, president of Advocates for Highway and Auto Safety, at a news conference to release the report Tuesday. 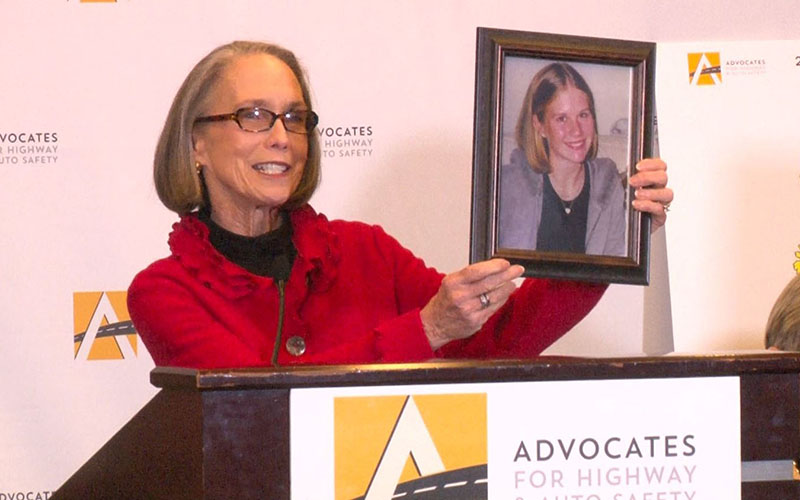 Helen Witty, national president of Mothers Against Drunk Driving, holds a photo of her daughter Helen Marie, who was killed in 2000 by an impaired driver, and vowed to keep pushing for traffic-safety laws until “there are no more victims.” (Photo by Alyssa Klink/Cronkite News)

The 16 laws targeted by the group fall in five areas: seat belt and motorcycle helmet requirements, child seats, teen driving, impaired driving and distracted driving. Arizona did well on impaired driving, getting credit for all three laws in that category, but only has one other backed by the report, a requirement that teen drivers have a licensed adult in the car during their six-month learner’s permit period.

Chase said Arizona needs to work on a few specific laws: Primary seat-belt laws, which allow an officer to pull over a driver for not wearing a seat belt, and mandatory motorcycle helmets.

Gutier said that a helmet law is “never going to happen” in Arizona, but noted that about 86 percent of motorcyclists in the state already wear helmets without a law requiring it. Similarly, he said that while Arizona does not have primary seat belt laws, the state does require seat-belt use and has a “great record” of issuing seat-belt citations.

“Even though we are a secondary state, last year we wrote 33,186 seat belt citations,” he said.

Gutier said the state should get more credit for its efforts to prevent drunken driving. Those efforts include programs to help find designated drivers, the “know your limit” campaign, which helps people know whether they drank too much to drive, and the ability to take either a blood sample or a breathalyzer test for suspected drunken drivers.

One area where the state fell short was in the area of distracted driving. Gutier said he hopes the Legislature can pass a bill this year to ban cell-phone use and text messaging behind the wheel.

Chase and other advocates said they plan to continue fighting until every state has passed their recommended laws. She was accompanied Tuesday by police and medical officials, and by Helen Witty, national president of Mothers Against Drunk Driving, who lost her daughter Helen Marie to an impaired driver in 2000.