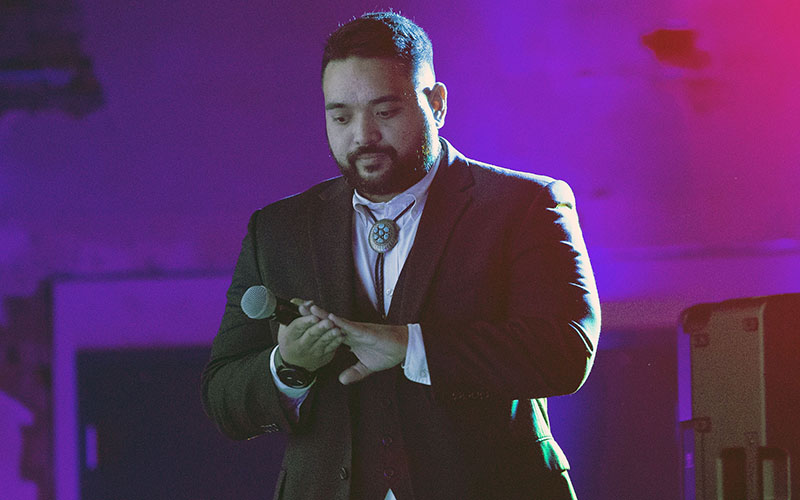 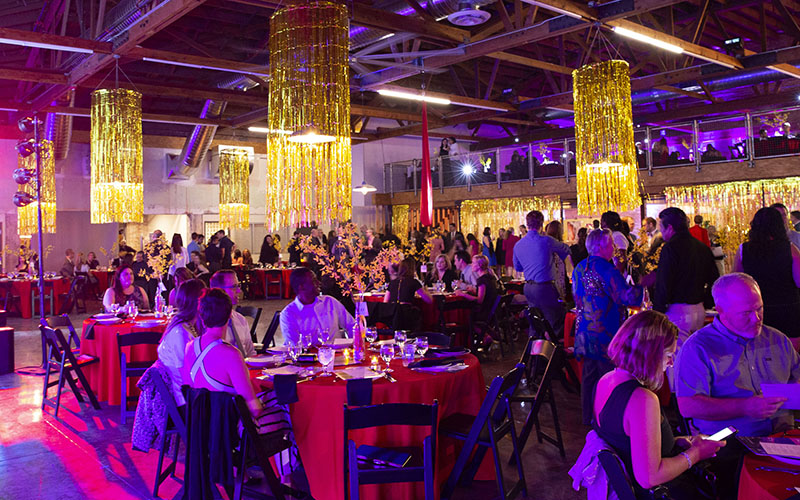 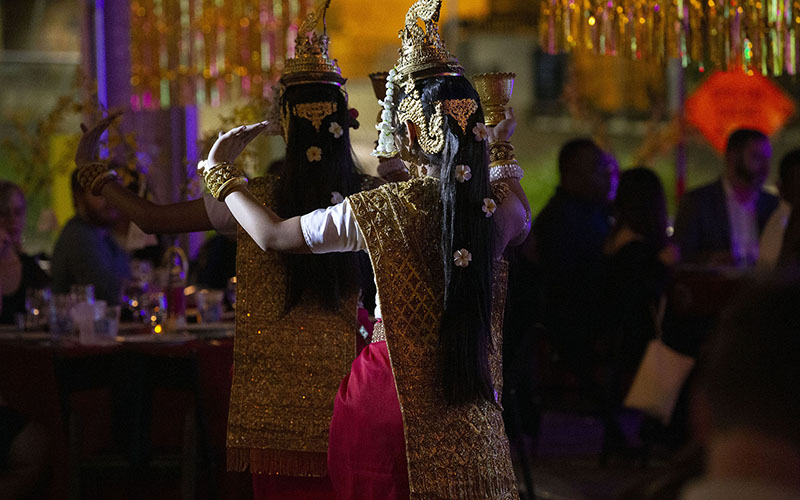 Members of the Arizona Cambodian Dancers performed a traditional dance at the So Good Food and Film Festival. Organizers included as many Asian cultures as they could through entertainment, food and decor for the evening. (Photo by Vivian Meza/Cronkite News)

PHOENIX – On a cool November evening in a warehouse on the edge of downtown, Vicente J. Reid moves through the crowd at an Asian film festival in a sleek black suit, crisp white shirt and silver bolo tie encrusted with turquoise stones.

He greets everyone as if he has known them for years – and, chances are, he has.

Reid, a Filipino-American raised by a single mother in a heavily Latino neighborhood of Phoenix, helped organize the film festival as a fundraiser for a program that provides legal services to families facing deportation. It’s part of his mission to help Asians in a state where they make up just 3.5 percent of the population, where they don’t often see themselves in positions of power – where, he feels, they are often overlooked.

“It ties into our ego, and ties into this ideal of, ‘If there’s no one that looks like me, how can I do it?'” Reid says. “For a lot of us, we’re the first ones to be doing certain things.”

To Reid, it is time that Asians make their voices heard in Arizona, and the best way to do that is to elect more of them to public office.

“Asian Americans are a true combination of Asian and American. We’re the perfect mixture of this old, historic culture endowed into this American spirit,” Reid said.

The Asian population in the U.S. grew from 11.9 million in 2000 to an estimated 20.4 million in 2015, a 72 percent growth rate that the Pew Research Center called the fastest growth rate of any major racial or ethnic group for the period. While Hispanics still outnumbered Asians about 3-to-1, their population grew by 60 percent in the same period.

In Arizona, according to data from the Migration Policy Institute, the share of immigrants coming from Asia grew from 13.5 percent in 1990 to 20.9 percent by 2016, while the percentage coming from Latin and Central America stayed the same.

But it’s still rare to spot Asians in positions of power: They hold just 17 of the 535 seats in Congress and only a handful of the 90 state legislative seats. 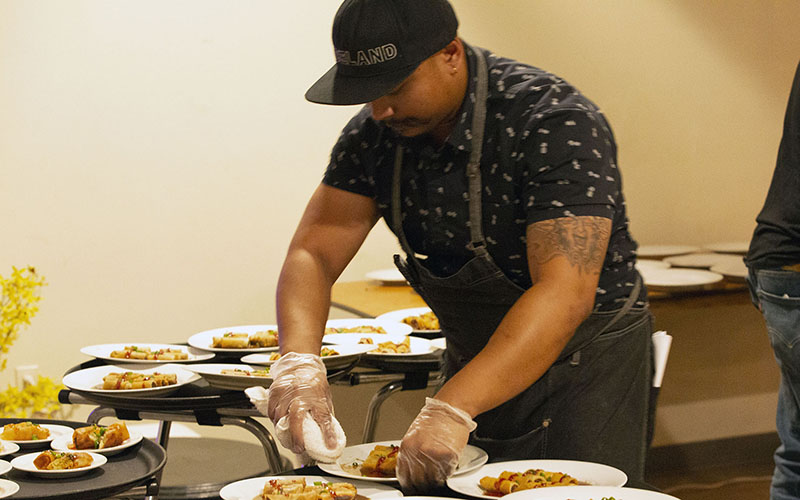 Chefs like Kevin Rosales of Good Fortune Kitchen were able to display their cuisine for guests at the So Good Food and Film Festival in November. (Photo by Vivian Meza/ Cronkite News)

“Asian Americans continue to be marginalized and excluded from the most basic conversations and most basic topics,” said Sadi Chhoa, a vice president of OCA Phoenix, which works to advance Asian Americans and Pacific Islanders through networking, workshops and other events and resources.

Reid, the CEO of the Arizona Asian Chamber of Commerce, said part of the problem that Asians have to grapple with is “this idea of the model minority.”

“Although certain sects of our community have done very well, there are sects that haven’t and are still in poverty because they have that stigma, and it’s hard for them to get the resources they need,” he said.

Reid wasn’t always inclined to be involved in politics, or even have an active role in the Asian community. Raised by a single mother from the Philippines, after his white American father left, Reid’s focus was on other things growing up. But while he didn’t know what he wanted to be exactly, he knew he would succeed in life if he stayed determined and persistent.

“America is the land of opportunity,” Reid said. “We are one of those very few amazing countries that have ever existed where, as long as you work hard, you can succeed.”

The spark was lit while he was an undergraduate at Arizona State University and met Madeline Ong-Sakata, an Asian-American community activist and prominent figure in the community in Phoenix at the time.

Ong-Sakata was the daughter of Wing F. Ong, who became the first-ever Asian legislator in the U.S. when he was elected to the Arizona House of Representatives in 1946. During his six years in office, Ong focused on education and assistance to low-income families, causes that Reid would focus on as he ventured out into the world.

Inspired by Ong-Sakata’s work and in honor of her Chinese father’s legacy, Reid decided to teach impoverished children in China for a year after he got his bachelor’s degree in business management. But when he arrived in Guandong, a province in southern China, he faced discrimination that he thought he had left behind in Phoenix. 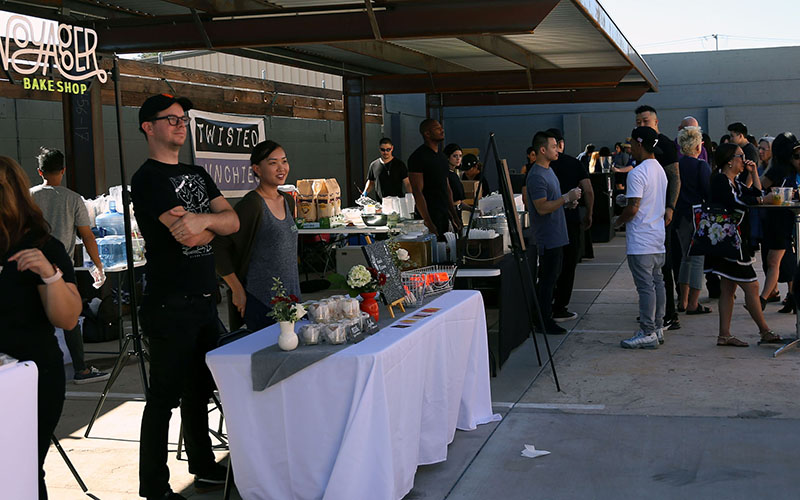 Vendors at the first-ever So Good Food and Film Festival consisted of local businesses. Food options at the event consisted of Asian-inspired or fusion foods. (Photo by Vivian Meza/Cronkite News)

“I had Walgreens lighten the picture I sent with my application,” Reid said, but it wasn’t enough. “When I arrived, they thought I was a maintenance man because of my tan skin until I began speaking English. Then the program placed me in the poorest school they had.”

Besides teaching him how different he, as an Asian American, was from the Asians he met in Asia, Reid also got a new appreciation for the freedoms he had in the U.S.

When he returned from China, Reid began dedicating his time and efforts to the Arizona Asian Chamber of Commerce, which he describes as a multigenerational group focused on education, small businesses and government.

It’s just one of the many Asian-focused organizations that have sprung up in the six decades since Wing F. Ong’s time in the Legislature. Besides the chamber, there is the Arizona Asian American Association, led by Albert Lin; the India Association of Phoenix, led by educator Rachel Misra; and Chhoa’s OCA of Phoenix.

They represent different groups of Asians and advocate for different issues, but they face many of the same struggles trying to get more Asian Americans civically involved: language barriers, citizenship status and lack of encouragement from older generations.

“Asians, historically and culturally, have their paths aligned for them as they grow up: Boys go on to be engineers and girls become doctors,” Misra said. “Now they’re realizing that they can use their education to do even more good, so they’re leaving their jobs in IT or in the hospital to run for office.”

But challenges remain. There are more than two dozen languages spoken in the Asian community, which means that even people from the same country might speak a different language.

That can make voting complicated, especially for those not fluent in English.

Arizona ballots are typically available in Spanish or English. The secretary of state’s website includes information on voting in a wider variety of languages, including several from Asia: Korean, Tagalog, Mandarin, Japanese and Vietnamese. Still, advocates say, that leaves out a lot of people.

In a state where only a handful of government officials are of Asian decent, advocates like Vicente J. Reid hope to spur more civic involvement by the Asian community. (Photo by Vivian Meza/Cronkite News)

“The mentality most Asians have is, ‘If I cannot read it, then I cannot make an educated decision. It is better for me not to participate than to participate,’” Chhoa said.

According to the Pew Research Center, three in four Asian-American adults were born abroad. Of those, only about half say they speak English very well and only one-third hold U.S. citizenship.

But Chandler City Councilmember Sam Huang, who was born and raised in Taiwan, said that lack of language skills and citizenship status should not deter Asians from participating in politics.

“The majority of Asian Americans here do not have citizenship, but they will some day,” Huang said. “They live here, they can still get involved. They can’t vote, but they can support a candidate, volunteer, donate, and influence the politics here.”

Those are just some of the ways that organizations like Reid’s chamber and Lin’s AAAA look to raise the visibility of the Asian community. They organize workshops about obtaining citizenship and registering to vote, hold events for Asians to meet and network and provide community service opportunities so members can build a presence in the greater community while helping those in need.

Reid acknowledged that not every group is as supportive of Asians who look to have a greater say in the public narrative. But, calling on his own mixed-race heritage, he believes collaboration from other ethnic and racial groups is crucial for future growth and representation.

Reid said he was inspired by the candidacy of Hiral Tipirneni, an Indian American who was twice nominated – for a special and general election – as the Democratic candidate for Arizona’s 8th District in Congress. She lost to Rep. Debbie Lesko, R-Peoria, but did surprisingly well in a heavily Republican district.

“Although she unfortunately didn’t win, she inspired a lot of individuals, and that’s what really meant a lot to the community as a whole,” he said.

Reid said he worked on campaigns in three election cycles and ended up depressed after each at the lack of progress being made for Asians. But this latest election was different, he said.

“We actually saw wins, we saw an impact, and we saw change,” he said. “Instead of being completely exhausted at the end of it, I was energized.”