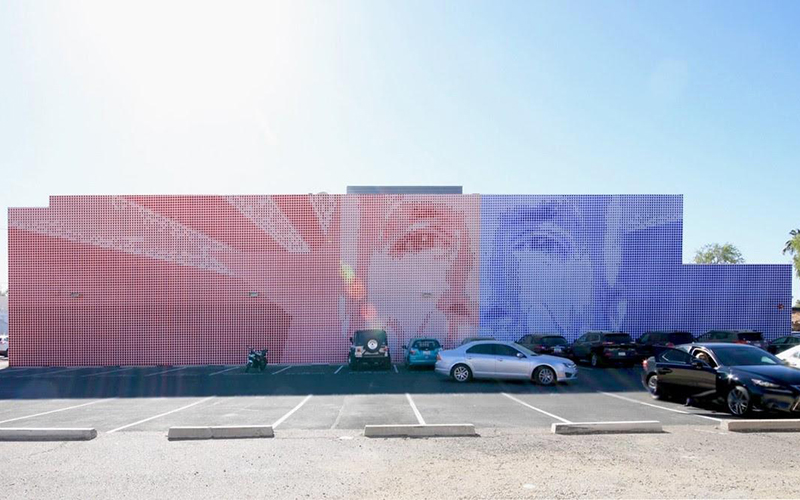 SCOTTSDALE – A battle over the proper way to pay an artistic tribute to an Arizona icon is brewing in Old Town.

Last week, a privately-funded public mural honoring John McCain was put on hold by city leaders. The project is being reconsidered after complaints from a local business owner who insists his opposition has more to do with property rights and respect for the late senator than it does politics.

The “Maverick Mural” is the brainchild of local two architects.

“The idea was borne with this very large blank facade, to be able to do something for the community,” said Tommy Suchart, principal architect of Chen + Suchart Studios at Marshall Way and Third Avenue.

The blank facade is a 120-foot-wide by 30-foot-high wall on the side of Suchart’s building, which is owned by an out-of-town landlord.

The mural idea, which came from Suchart’s colleague Aaron Bass and was approved by the building’s owner, involves 30,000 colorful cut-out pictographs of Arizona’s five Cs — cattle, citrus, climate copper and cotton — that morph into a red, white and blue image of the late senator.

“As they aggregate, they create the face, and it’s all based on paint densities and a simple math equation that really becomes this image and this icon for Scottsdale,” Bass said, adding that producing so many pictographs was a painstaking process.

“Preparing digital files, to then cut through this piece of equipment, and then I’ve had family and friends coming to my house and sitting there to cut little pieces of paper out for days and months, like at my house – my dogs were covered (in it). It was wild!”

The $20,000 cost was entirely paid for by a Kickstarter campaign that began in August, and the city’s development review board gave its approval last month.

But earlier this month, the City Council voted to reconsider that decision and told organizers to cease work on the partly completed mural. 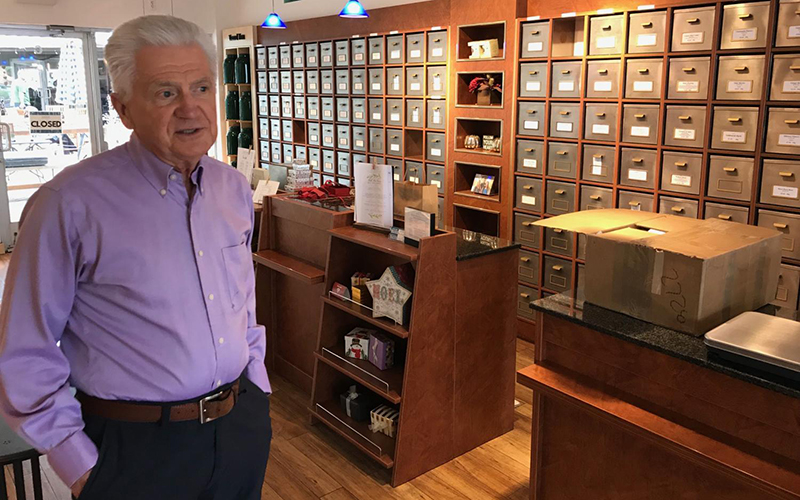 Dewey Schade, who owns a parking lot adjacent to the “Maverick Mural” in Old Town Scottsdale, calls the mural disrespectful and says such public art projects should go through proper channels. (Photo by Phil Latzman/KJZZ)

That’s where business owner and landlord Dewey Schade comes in. He owns the parking lot directly adjacent to the building.

“I got some calls from people on the avenue who park there and (they) said, ‘Dewey, are you doing a mural for Senator McCain?’ And I said, ‘What are you talking about?’”

Schade said he was blindsided by the project, which he says infringes on his property.

“You of course are aware of the old maxim ‘Better to ask for forgiveness than permission.’ And that works in a lot of circumstances if they (think they) can get away with it,” Schade said. “This situation that we have going now is that problem gone wild.”

Suchart said the muralists have tried to be as unobtrusive as possible, working at night so as not to interfere with business hours, and by using a boom and bucket to avoid physically setting foot on Schade’s property.

“It’s a zero-lot-line condition,” he said, meaning the Chen + Suchart building extends up to the property line of Schade’s parking lot. “We should be able to have access to our building. If he had a building and we had an empty lot, the same conversation would happen.”

Bass suggested Schade might have other reasons for opposing the mural.

“I honestly don’t think he is supportive of the late senator and our project in general. The project is meant to commemorate the late Senator McCain and the veterans who are serving right now,” he said.

Schade said nothing could be further from the truth, adding that he has known the McCains for four decades. He called the mural “disrespectful.”

“To me, this is one of the most unseemly exploitations of a person’s celebrity and service that I think is imaginable. And personally, I don’t want to participate in that.”

Bass said that type of attitude is a bad look for the city’s public art identity.

“How does it look from an outside standpoint when other artists are going to come here and try to do something when the city’s development and review board says, ‘We’re going to re-look at this’? People are going to start thinking twice about doing things like this – they’re going to to Phoenix.”

Schade insisted that it’s not about the art.

“I don’t care if those guys think they are Picasso, Van Gogh, Robert Mapplethorpe or Andy Warhol. This doesn’t belong here. Because it’s private property. There is a process in this city to do public art.”

Creators of the “Maverick Mural” say they will continue to fight.

But Schade said not if he has anything to do with it.

“If you really want to honor Senator McCain, then let’s form a committee in Scottsdale. I’ll be on the committee, and I’ll write the first check – a substantial one – and we’ll do it right.”

The City Council will take up the issue again in February.