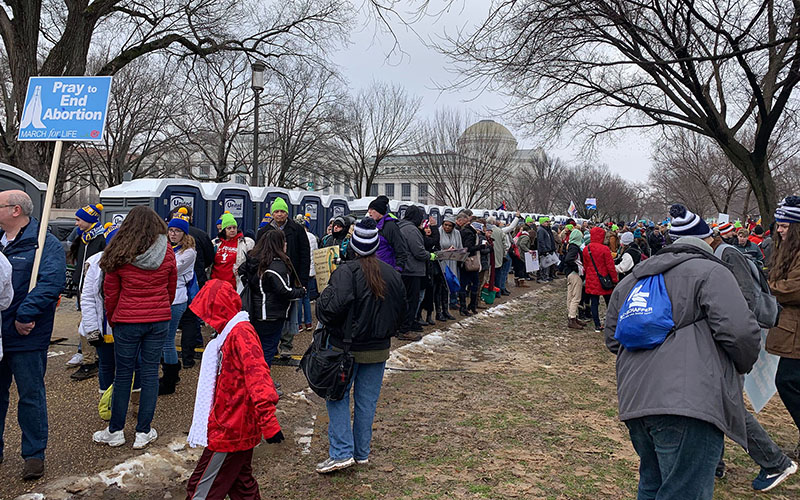 This would be a good weekend to have the portable-toilet concession in Washington, which expects to host tens of thousands – including some from Arizona – for pro-life, women’s rights and Native American rights marches, along with an MLK Day parade. (Photo by Andrew Howard/Cronkite News)

WASHINGTON – Arizona residents Miguel Valladares and Amanda Blackhorse will be in Washington this weekend to join tens of thousands of others to march for a cause.

They are among the throngs expected to pack downtown Washington for three major marches in two days, capped by a parade Monday to mark Martin Luther King Jr. Day.

The demonstrations kicked off Friday with the 46th annual March for Life and the inaugural Indigenous Peoples March. On Saturday, the Women’s March that brought hundreds of thousands to Washington to protest the day after President Donald Trump’s inauguration will return with what is expected to be a much smaller – but still in the thousands – demonstration.

Despite the multiple messages, Arizona residents who made the trip to the capital were still pumped for the opportunity to make their voices heard and were not worried about having that message drowned out by the other events.

“This space is to celebrate us, I am in no way seeing these marches as competition,” said Alejandra Pablos, a Nogales native who has a speaking role at the Indigenous Peoples March.

“Our message will only be stronger as we hold on to our truth,” Pablos said in an email.

A Metropolitan Police Department spokeswoman said the department does not anticipate problems handling the crowds from all the demonstrations, and said the agency is working with U.S. Park Police, U.S. Capitol Police and event coordinators “to ensure the safety of all District residents and visitors.”

“MPD is fully equipped to handle First Amendment assemblies of any stature in the District of Columbia,” Alaina Gertz, a police department information specialist, said in an email. “For the demonstration this weekend, MPD will have full deployment of all sworn members during the event.”

Event organizers caught one break: The partial government shutdown means that the region’s Metro subway trains and buses have not been as crowded as they would be on a normal weekday.

The Women’s March aims to “harness the political power of diverse women and their communities to create transformative social change,” according to its website, while the MLK Jr. site says the parade “symbolizes the need to continue Dr. King’s work and reinforces the idea reflected in his words.”

The biggest event is likely to be the March for Life, held annually to mark the anniversary of the Supreme Court’s 1973 Roe v. Wade decision recognizing a woman’s right to an abortion.

The event begins with speeches and a rally on the National Mall before the crowd marches to the Supreme Court to protest.

The march typically draws a national audience, including thousands of students from across the country like Valladares, one of a contingent of students who came from Brophy College Preparatory in Phoenix.

Valladares, a senior, said the March for Life is important to him for a variety of reasons, but it’s mostly about dignity.

“All in all, it is about protecting and respecting human dignity,” said Valladares, adding that the intention of the march is to send a message to the world that “we care about every single human life.”

It will be preceded on the Mall Friday by the Indigenous Peoples March, which hopes to bring attention to a range of issues the face Native Americans.

One of those speaking will be Amanda Blackhorse, a Navajo from Kayenta, whose mission is to eliminate racist mascots in sports. Blackhorse has been fighting the issue for years and was the lead plaintiff in a lawsuit that attempted to strip copyright protection from the Washington Redskins – a word Blackhorse refuses to say.

“This is D.C.,” Blackhorse said of the opportunity to bring her message to the team’s home town. “The Washington NFL team, they are the Washington R-words. We still have an issue, they still have a racial slur as a name in this region and that needs to change.”

Blackhorse also said she doesn’t think the other events will take away from their march.

“I think people are really interested still, they are asking for this,” she said. “The fact that we will be here says a lot and I think there will be a good response. I know there is a lot happening but the mascot issue is not just about mascots it’s about human rights.”