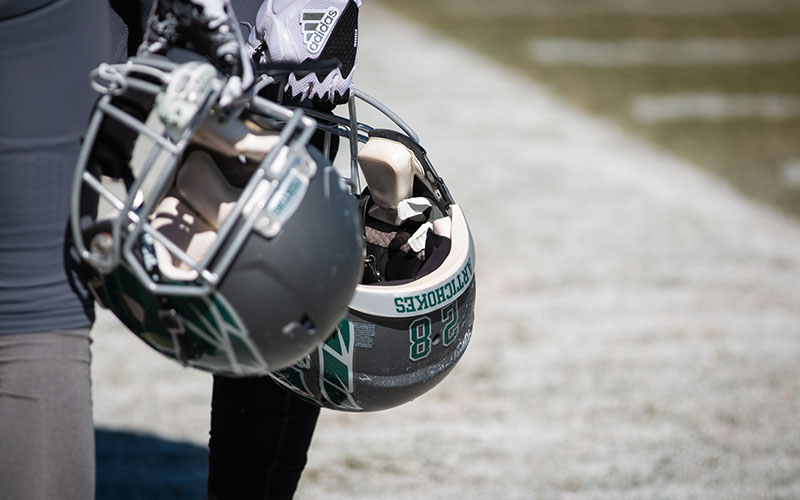 Community college football no longer exists in Arizona after the Maricopa County Community College District board made the decision to cut the sport at all of its schools. Other junior colleges outside the county followed suit. (Photo by Sarah Farrell/Special for Cronkite News)

PHOENIX – At 11:05 p.m. on Nov. 10, the lights turned off at John D. Riggs Stadium on the campus of Mesa Community College, as they usually do after the Thunderbirds play. But it might have been the final time the stadium goes dark after a junior college football game.

Citing financial reasons, the Maricopa County Community College District board last February cut junior college football at its four schools. Then dominoes fell across the state as community colleges in Tucson, Yuma and Thatcher eliminated their teams, citing, in part, the increased travel costs that would be required without the Maricopa County programs to schedule.

That left the state with zero junior college football teams.

The impact was far-reaching, including prompting 11 MCCCD football players to file suit alleging that the move violates federal law because African-American students, who make up 62 percent of players at the four schools, are disproportionately impacted by it. Attorney Phillip A. Austin, who is representing the plaintiff, will hold a news conference today in his Mesa law office to address the issue.

“Not only did the decision negatively impact the Plaintiffs’ educational opportunities but the decision negatively affects educational opportunities for district African-American students at a rate 10 times that of the rate at which non-African-American students in the district are affected,” Austin said in a news release citing “racial bias” about the suit filed Dec. 31 in U.S. District Court in Phoenix.

The MCCCD issued a statement in response.

“We understand the disappointment of these young men with our decision to eliminate our football programs,” the statement said. “We have great respect for the nearly 350 student athletes impacted by this decision, including these 11. We believe our decision in this matter was necessary and in the best interest of our students and system. Once we are served, we will carefully review the lawsuit and will respond further at the appropriate time.”

“The Monday before signing day, we were told that football was dropped, that we were able to play the 2018 season and after that there would be no more football,” Phoenix College coach Mark Mejia said.

The ramifications were many. Pima Community College in Tucson announced in June that it would drop football after the 2018 season. In December, Arizona Western College in Yuma and Eastern Arizona College in Thatcher announced they, too, would eliminate the sport. It would prove costly, they said, to compete only against teams outside Arizona.

The sport had existed at the junior college level in Maricopa County since Phoenix College began playing in the 1920s. 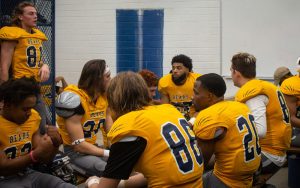 Players go through their final preparations before taking the field. Many still have aspirations to continue playing football. With football ending in Maricopa County after this season they will have to try and get a scholarship, walk on to another program or transfer to another junior college. (Photo by Chris Lindsay)

As the end of the season approached, district coaches and players held out hope that the seven-member Maricopa County Community College District Board, with three new members – Marie Sullivan, Tom Nerini and Kathleen Ann Winn – coming aboard, will reconsider the decision. Nerini and Sullivan have expressed a willingness to reopen discussions.

Their hope may have some momentum.The board held an impromptu session to challenge the board’s leadership this week and at the meeting, board president Laurin Hendrix stepped down and Linda Thor was elected to replace him by a 4-3 vote.

Mesa coach Ryan Felker said the effort to save junior college football is now in a “third-and-12” situation after the board vote.

Dropping football was one of the most prevalent issues that arose during her campaign for the district board position, Sullivan said, and one of her reasons for running was to bring transparency to the board’s decision-making.

“It’s important to engage public stakeholders in the decision-making when it impacts them, not only as participants but as taxpayers,” Sullivan said. “I felt that the current board was not doing either of those things.”

However, it is the board that is charged with hiring and firing the chancellor of the district.

Football funding is a challenge

MCCCD Chief Operating Officer Elliott Hibbs said high insurance costs related to football, along with the capital necessary for such expenses as stadium upkeep, are big reasons for the decision to eliminate football programs.

And the programs suffered a blow when Gov. Doug Ducey’s budget for fiscal 2016 cost community colleges in Maricopa and Pima counties to lose all state support, which was worth approximately a combined $15.6 million.

Hibbs said there was a shift in mindset about utilizing limited funds.

“We’ve had to look at doing our budget in a little bit different way than what had been done in the past,” Hibbs said. “We’ve gone away from simply just allocating money. Instead, now we’re looking at how we actually (spend) money every year and budgeting on expenditures, not just allocating funds out to colleges.”

According to Hibbs, each college allocates the funding it receives from the district independently. The district does not have oversight into how much money is allocated for athletics at each school.

“We basically give the colleges a lump-sum budget that they allocate after that,” Hibbs said.

Phoenix College, for example, allocates about $1.4 million to athletics out of its nearly $60 million overall budget. Of that amount, nearly $200,000 goes to football expenses such as coaches salaries, equipment and travel costs.

“It’s not these boys that I’m concerned about,” Felker said of the players on his final team, who attended at least one year of college while on a football scholarship. “It’s the ones in our communities and neighborhoods over the next however many years that don’t have an opportunity or vehicle like this to get an education or access to it.”

Phoenix College linebacker coach Marques Hawkins is an example of the benefits of junior college football programs. He was a talented running back coming out of high school in Tempe, but didn’t have the grades to go directly into a Division I program. He went to both Mesa Community and Phoenix, played football, gained maturity and got his associate’s degree before earning a football scholarship from Illinois State. 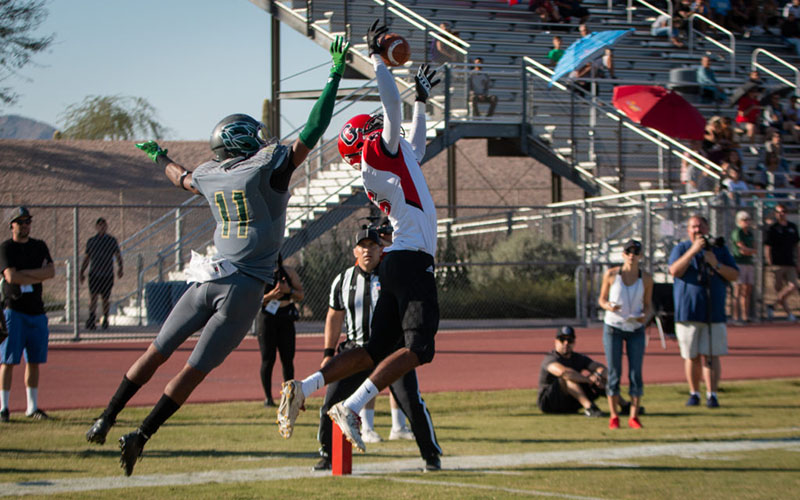 Sophomore defensive back DJ Charles breaks up the pass in the end zone against Scottsdale. The Guachos played their final game of the 2018 season in Scottsdale Nov. 10. (Photo by Chris Lindsay/Special for Cronkite News)

Hawkins said once football is gone in Maricopa County there will be a diminished athletic culture because “kids are going to go wherever the opportunities lie.”

Players who don’t have the grades to make it into a four-year program out of high school will have to go to California or Texas or other states with JUCO football programs if they want to continue their careers, he said.
Hawkins believes the exodus of talent is something that will hurt Phoenix sports in the long run because, “we’re cutting out a lot of people that, over time, have really contributed to the makeup of our schools and the growth of our student body.”

One of those players that exemplifies the term “student-athlete” is Phoenix College defensive lineman Davyon Duhart, who is also one of the plaintiffs on the lawsuit.

Duhart went to Tolleson High School in the southwest part of the Valley. Due to a shoulder injury in high school, Phoenix College offered his only opportunity to continue playing football.

Duhart knew 2018 would be the last season of JUCO football in Maricopa County before he joined the team, but he saw the situation as a motivating factor. It forced him to focus and work harder on and off the field this season.

Duhart, who was on track to end the year with a 4.0 grade point average, plans to transfer to a four-year university and hopes to continue his football career.

“I’m probably going to come back and grind in the off-season,” Duhart said. “That’s what I do. I just grind; give it my all. And if there’s not (JUCO football next year), I’ve got good grades. I plan to just walk on, try to get an academic scholarship and try to still play football.”

One of the biggest challenges the district faced was covering insurance costs. And although Hibbs was not involved in the decision to end football, he noted that the insurance cost for the district was high relative to the number of people it served. Further, he said football has resulted in the largest number of claims to cover player injuries.

The district provides insurance for all of its nearly 200,000 students, paying a premium of about $900,000 a year. There were about 350 junior college football players in Maricopa County during the 2018 season.

According to Hibbs and Matt Hasson, MCCCD director of communication and public relations, football accounted for about 30 percent of the annual insurance costs but made up only 2 percent of the student body.

Insurance savings were not the only reason that district officials cited for dropping football. They said it was also part of an effort by the district to focus on workforce readiness at their campuses.

Hibbs said the goal of community college is to “give (students) an education in an area where they can go get a quality job when they leave,” and the district’s funding models are changing to reflect that.

If there are limited funds, the mindset now is to spend in areas that will benefit the most people. 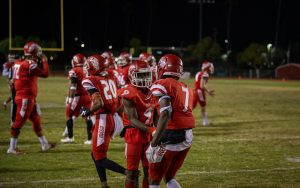 Mesa players warm up before their final home game of the 2018 season. They finished the season with a 4-5 overall record. (Photo by Matthew Roy/Special for Cronkite News)

Even with a football budget more than twice as high as its Maricopa County competitors, Pima elected to drop football largely because of the added costs to play teams outside of Arizona.

Options now are few for players who want to continue their education and football careers in Arizona.

Outside of the junior colleges, there are two National Association of Intercollegiate Athletics (NAIA) schools in Arizona — Arizona Christian in Phoenix and Ottawa University in Surprise, no NCAA Division II or Division III schools and three NCAA Division I schools with football programs: Arizona, Arizona State and Northern Arizona.

“It definitely didn’t sound good. It didn’t feel good,” he said. “(There are) a lot of guys missing opportunities like the ones we have.”

Sarah Farrell and Chris Lindsay contributed to this report.