Rep. Raul Grijalva, D-Tucson, led the meeting of House Democrats that looked at the effects of the federal government shutdown on Native Americans, from greater isolation in rural areas to shuttered clinics in urban areas. (Photo by Keerthi Vedantam/Cronkite News) 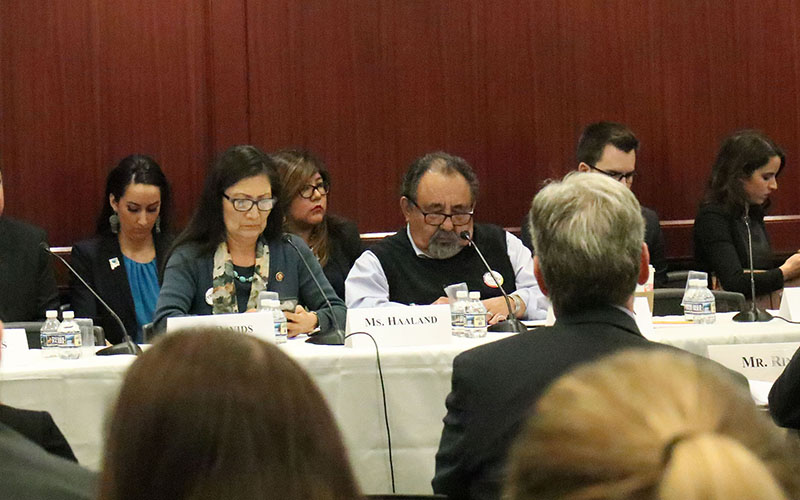 Besides Rep. Raul Grijalva, the meeting on the government shutdown’s affect on Indian Country was attended by Rep. Deb Haaland, D-N.M. (left), one of the first two Native American women elected to Congress. (Photo by Keerthi Vedantam/Cronkite News)

WASHINGTON – Even though she saw six opioid overdoses in recent months, two of them fatal, Kerry Hawk Lessard closed the medical and behavioral health clinic she runs for Native Americans in Baltimore and Boston.

She didn’t have a choice. When the government shut down, Native American LifeLines lost its funding.

“The shutdown of IHS is directly at odds with that obligation,” Lessard said Tuesday. “The money to operate our facility has effectively stopped coming in, but the patients have not stopped needing health care.

“It is unthinkable that we will not be able to assist in a time of such great need,” Lessard said during a meeting on the impact of the shutdown on Indian Country.

The Democratic Steering and Policy Committee hearing brought together experts to discuss new challenges faced by urban and rural tribal communities on health, accessibility and land management under the shutdown.

The hearing came on the 25th day of the government shutdown, now the longest in history, with no apparent solution in sight.

“We’ve just been trying to reopen government but now that we seem to have hit an impasse, we’re going try to figure out other ways … to make sure that very isolated communities in Indian Country have some level of sustainability,” said Rep. Ruben Gallego, D-Phoenix.

While more than three-quarters of people who identify as American Indians live in urban areas, those living in rural areas – like the reservations in much of Arizona – can face particular challenges because of their isolation.

Gallego pointed to recent snowstorms in northern Arizona that left some tribal members cut off from services they need, after funding for road maintenance dried up.

He said the shutdown came “without really regard to some of these areas of our country that are so remote” and “everyone’s being impacted.”

“I think our role in Congress is to figure out a way to mitigate this for the future and to try to get the open as fast as possible to stop the hurt that’s occurring,” he said.

He told the panel his tribe lost about $1 million in federal revenue during the last government shutdown, in January 2018. The tribe lost five medical staff members as a result.

“This is a long-term impact in rural reservation communities because we have difficulty recruiting and retaining medical, dental, behavioral health and other professional staff,” Payment said.

“This shutdown violates the trust responsibility to tribal governments and adds to the trail of broken treaties,” he said.

Also affected by the shutdown are public lands, both on and off reservations, that are neglected due to a lack of federal maintenance.

“We have laws in place and justifiable laws to protect cultural resources, historic resources, sacred sites and to put value into that and much of that is in public lands,” said Rep. Raul Grijalva, D-Tucson.

“What is going on now with the degrading of our parks with the shutdown with the vandalism with the looting. Those protections are not there.”

The shutdown began Dec. 22 when President Donald Trump refused to sign a budget bill funding a number of federal agencies because it did not include $5.7 billion for a wall on the Mexican border.

That budget covers about 800,000 federal workers, in the departments of Interior, Agriculture and Homeland Security, among others. Slightly more than half of those workers have had to work without pay because they are deemed “essential” employees, like Border Patrol agents or Transportation Security Administration screeners. The rest were sent home without pay.

Trump has repeatedly called illegal immigration a crisis and has insisted that criminal and drug activity would diminish if a border wall was in place.

But Lessard sees a different reality at her job.

“The drugs that my community is most abusing are not coming from the southern border,” Lessard said. “They’re coming from prescription pads. It’s easy to go to pain management clinics … and get a prescription that people abuse or they sell.”